A new age for animation

Design interactive vector animations for games, apps, and the web. Bring cartoons and banner ads to life. And add action to tutorials and infographics. With Animate CC, you can quickly publish to multiple platforms and reach viewers on desktop, mobile, and TV.

The October 2018 release of Animate CC (version 19.0) rolls out exciting new features for character animators, game designers, advertisement developers, animators, and educational content creators. Read on for a quick introduction to these features and links to resources offering more information.

Auto lip-syncing allows easier and faster method of placing appropriate mouth shapes on Timeline, based on the chosen audio layer. You can achieve this using an existing list of mouth poses, drawn within a graphic symbol and label them with corresponding visemes. When you apply auto lip-syncing on a graphic symbol, keyframes are created automatically at different positions matching with the audio visemes, after analyzing the specified audio layer. You can make any further adjustments if you want, by using regular workflows and Frame Picker.

Animate now introduces VR 360 and VR panorama document types which enable you to create such engaging content with ease. Also, you can use the virtual reality document type to import 3D model content (.glb files) to an Animate project and interact with VR output.

You can click and move MovieClip instances in the Preview panel. Animate detects the objects automatically when you click and move them around. They move along a cylinder or a sphere path depending on the selected document type.

Animate also lets you manage the virtual reality animations at runtime by using APIs. For example, you can introduce some objects in a 360 virtual reality environment when a user clicks a button.

You can now easily deform complex vector shapes and raster shape using asset warp tool. Create animations without having to redraw assets on each frame.

Using the warp handles that appear on the objects, you can reshape or distort specific object areas while leaving other areas intact. Users can select multiple objects using the selection tool and then select asset warp tool to create warp handles on them. All the selected objects are grouped when you create the first warp handle. This asset warp tool enables you to create frame-by-frame animation and tween animations on complex shapes or bitmap images. 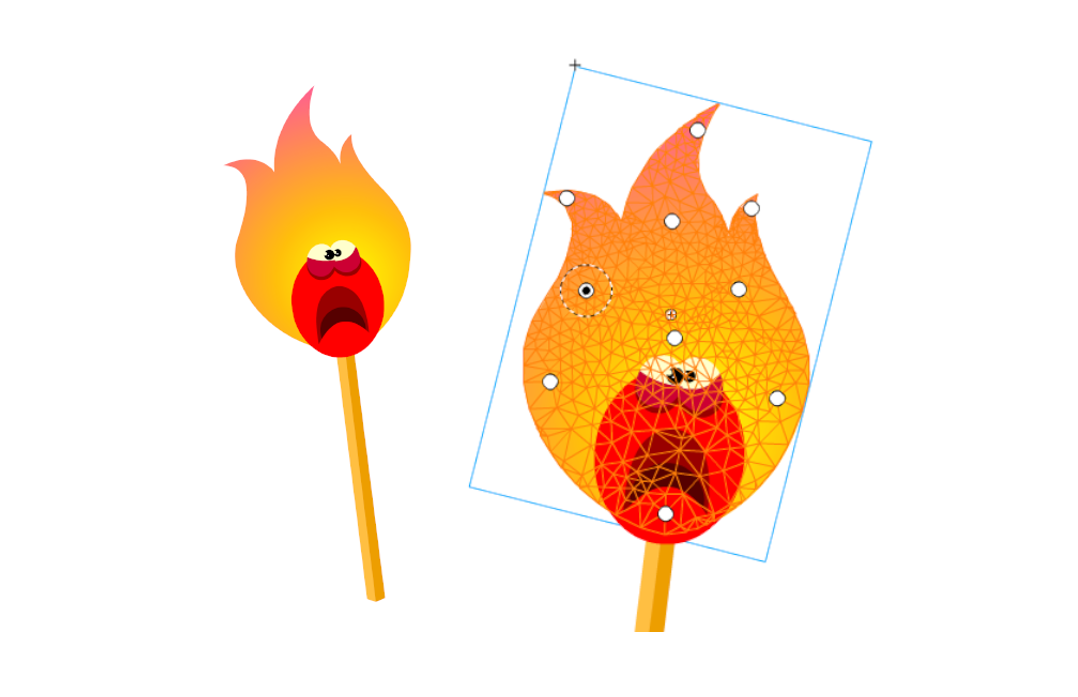 As an animator, now you can continue to author content in vector format and export as vector or raster format for HTML 5 platforms.

Click File > Publish Settings. If Export animation as texture is enabled in the Basic tab, you can view the texture publishing options in the Image Settings tab. By default, all the symbols are included in texture publishing. To selectively choose symbols for textures, click Change. 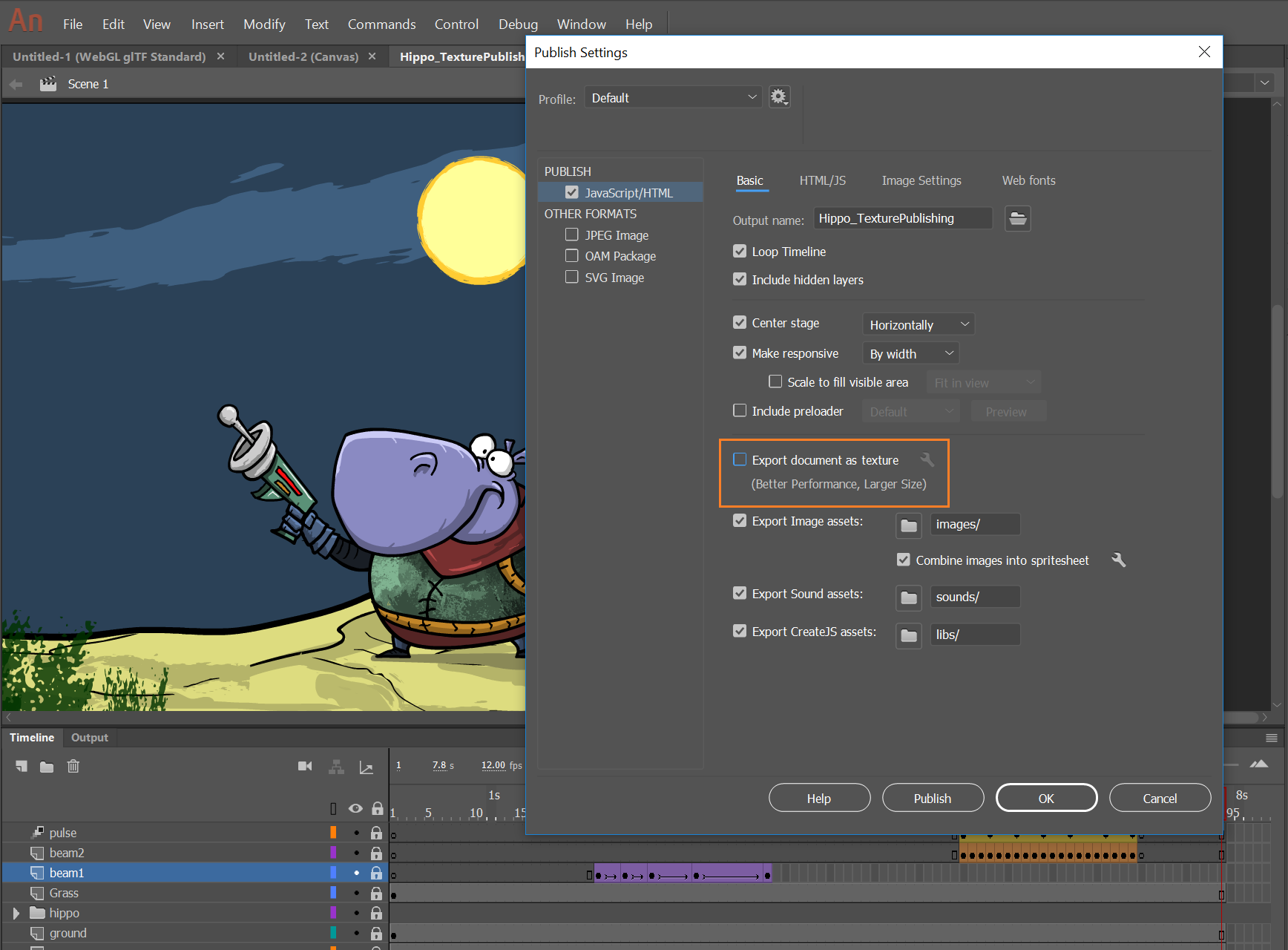 Animate allows you to parent one layer to another. Layer parenting is an easy way to allow one layer/object of your animation to control over the other layer/object. As an animation designer or a game designer, you can speed up your animation time as you can control movements of different parts of a character more easily.

Now, you can animate between poses easily by organizing assets in parent-child layers. When an object on the parent layer moves, the child layer automatically moves along with it. 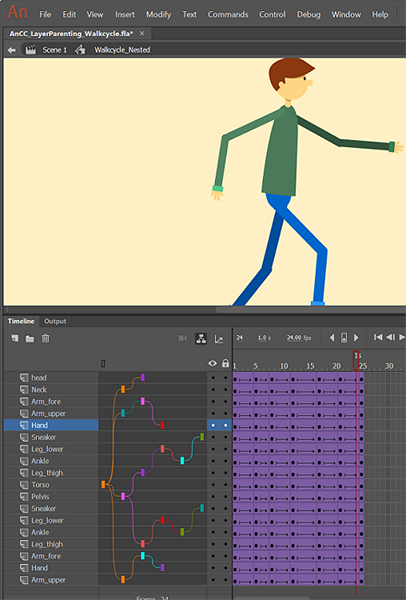 Add tints and filters to layers, play within and out fades, depth of field, and so on. You can make all these changes without changing objects on stage.

You can use frame level filters to apply them for all the objects at a time in a frame. Apply filters directly on the timeline (frames) without having to place the assets or animation inside a Movie clip. Filters can be applied over all types of assets including graphic symbols and shapes, providing more flexibility.

You can use standard document type which allows integration with standard glTF playback packages. The extended document type enables you to create advanced animations with interactivity that runs on Animate’s new glTF runtime.

Improved integration with After Effects

As an Animator, you often need to create animations in Animate and import them into After Effects for post-processing tasks. Now, Animate streamlines this workflow by providing a plug-in for After Effects.

You can import Animate FLA files into After Effects to composite them with a video or render them as video with more creative effects. The layer hierarchy of Animate is maintained in After Effects. After Effects can interact with Animate using the plug-in. 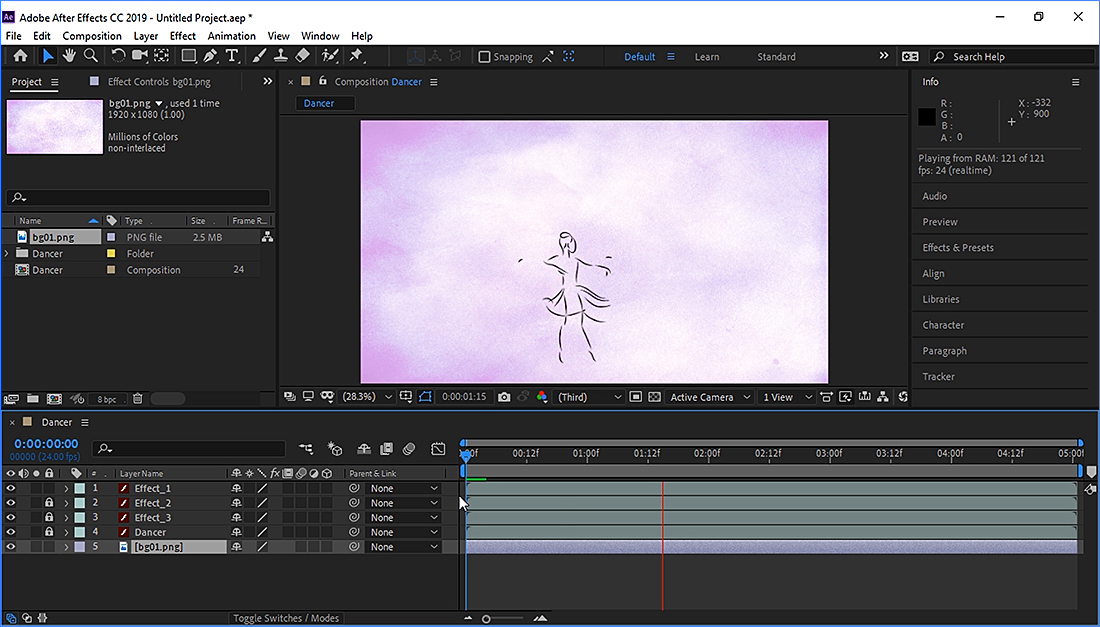 Animate and After Effects workflow

For more information, see Working with Premiere Pro and After Effects.

You can get started quickly now with Animate using the new Home screen. Choose the destination for an animation using any of the intents, Animate provides you the preset formats. Choose an intent from the tabs at the top of the screen such as Character Animation, Social, Game, Education, Ads, Web, and Advanced. In the Advanced tab, you can choose document types such as HTML5 Canvas, ActionScript 3.0, VR 360 (Beta), and so on.

Select the appropriate presets for each of the intents and click Create to start creating animations. You can view the recently used files in the left pane. Sample assets are provided at the bottom of the startup screen.

While working with your animations, to create a new document you can use File > New. Alternatively, you can use the following shortcuts: 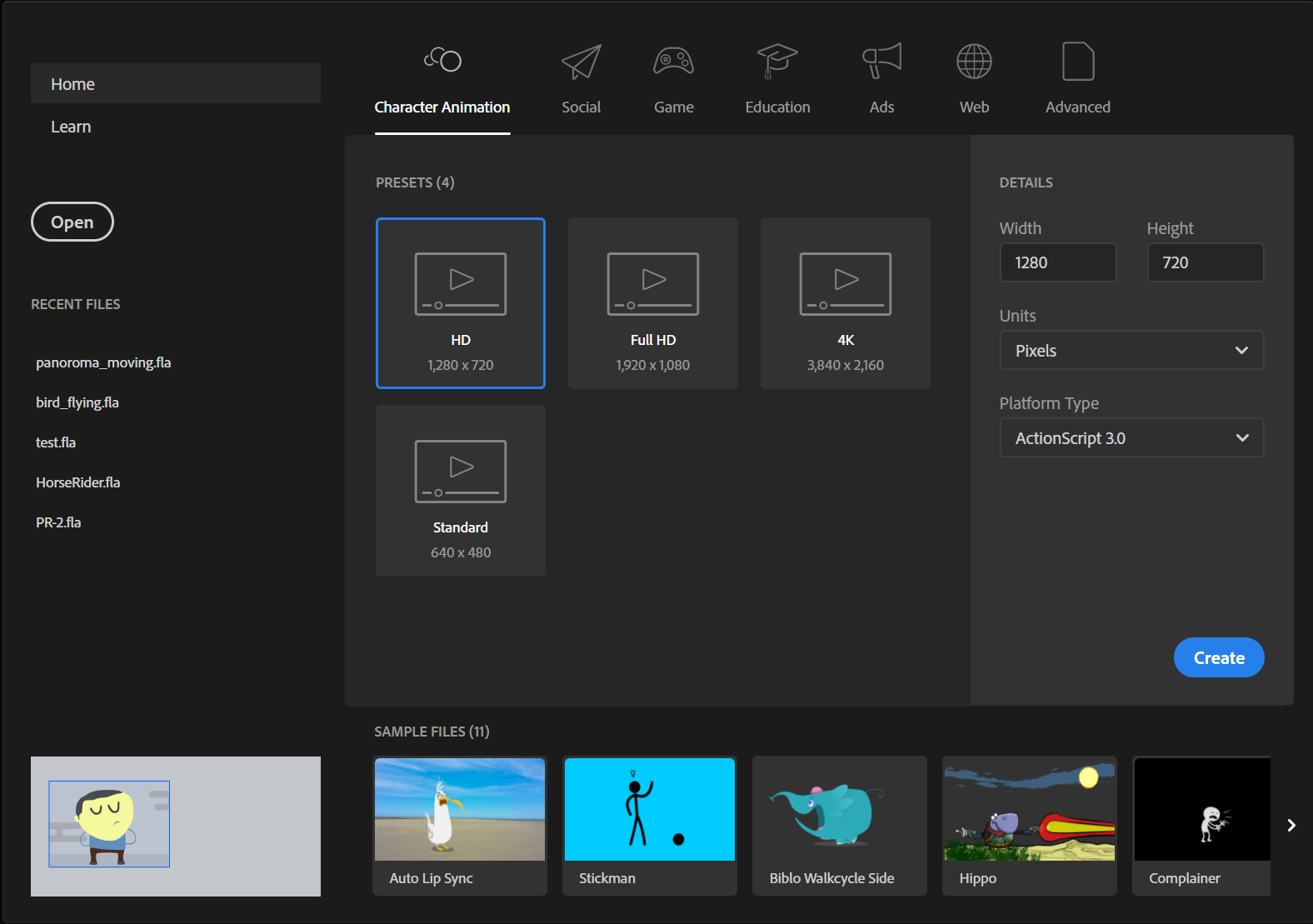 Support for MS Office pen Now, Microsoft surface users can get the best performance and line quality as the pen is natively supported.

Better looking interface Animate user interface has been updated using the Spectrum framework to make it as sharp and intuitive as with other Creative Cloud products.

Brush and eraser tools enhancements Improved drawing experience with Brush for preview and final Brush strokes. Pressure and Tilt options and minimum brush size options are added to Brush tool. Simplified smoothing control is provided for Brush tool. More controls are provided for the eraser tool, all the capabilities of the brush tool are now available for eraser tool.

You can group a set of layers and merge them as a single layer. In timeline, select the layers and right-click the selected layers. Choose Merge Layers from the pop-up menu as shown in the below screenshot. 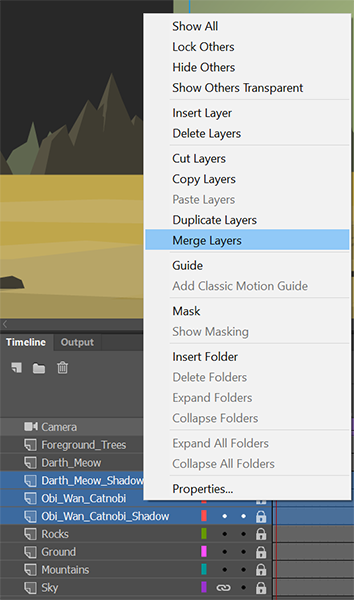 You can now choose any of the four color themes for Animate. To change the theme, select Edit >  Preferences. In General tab, click the drop-down list menu adjacent to User Interface and choose the appropriate theme. 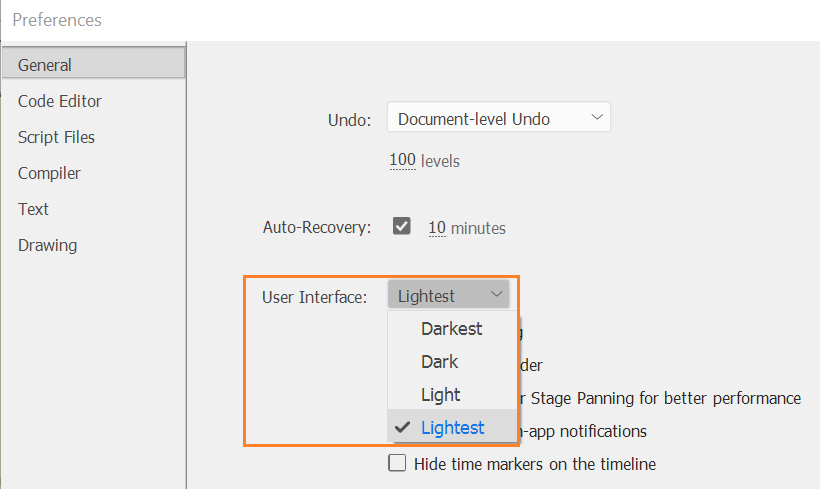 You can export, import or re-use the saved swatches. Tagged swatches can be re-used across all document types in Animate.

When you import H264 format videos in Animate, by default, the entire video is imported without affecting the number of frames in the video. If you want to match the document FPS, you can select the option in Import Video dialog as shown in the following screenshot. 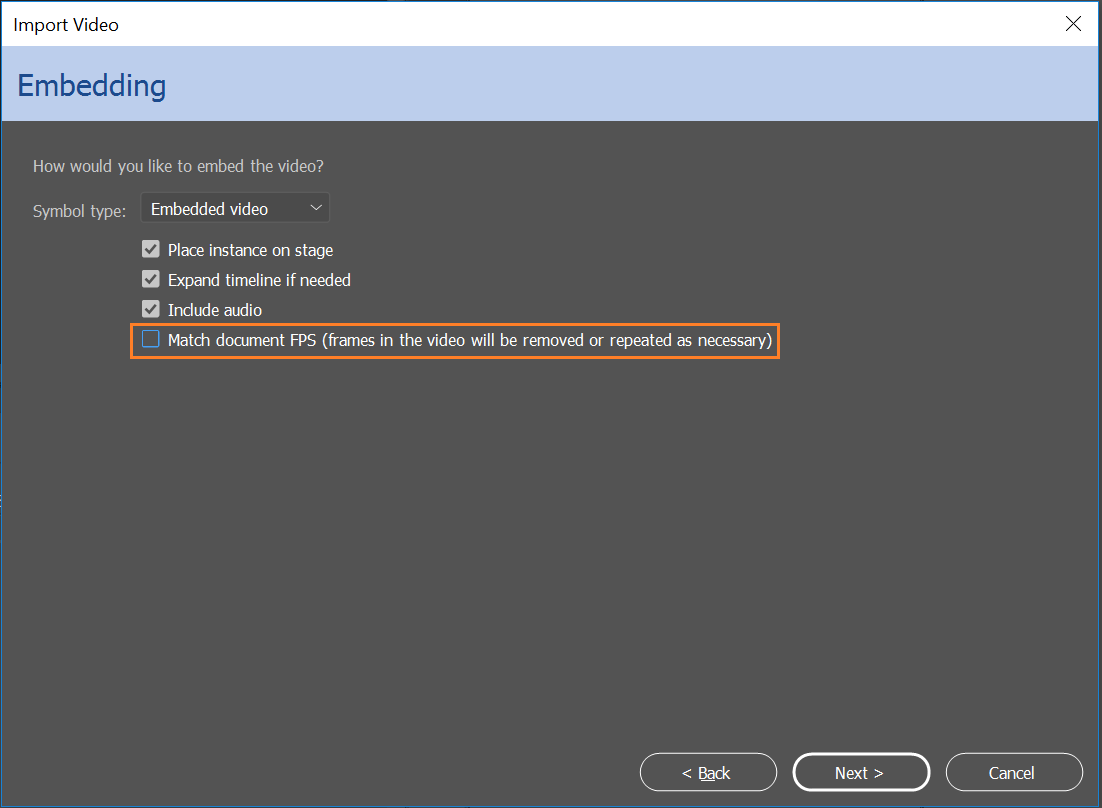 Your computer must meet the minimum technical specifications outlined below to run and use Animate CC.

i The latest version of Creative Cloud apps does not support some older versions of Windows and Mac. Learn more.

* Notice to users: Internet connection, Adobe ID, and acceptance of license agreement required to activate and use this product. This product may integrate with or allow access to certain Adobe or third-party hosted online services. Adobe services are available only to users 13 and older and require agreement to additional terms of use and the Adobe Privacy Policy. Applications and services may not be available in all countries or languages and may be subject to change or discontinuation without notice. Extra fees or membership charges may apply.

Adobe Premiere Pro CC is available in the following languages:

*Available for Windows only.

Adobe shares information and recommendations for optimizing your system to get the most out of the latest Adobe video and audio tools.

If you’ve been collecting legacy versions of Adobe software on your Mac for safety, but you’re running out of space, here’s some advice on how to remove the bloat.