Immigration turns the pain usually associated with importing and batch replacing files in After Effects a joy. While browsing for import, it shows file sequences as one line item instead of a long list of files. Immigration uses a custom algorithm to scan the file system at speeds dramatically faster than even the OS can. In our testing a server folder with 30,000 files that takes over 5 minutes to open in the finder opens in 12 seconds in Immigration (and that includes file-sequence detection!). If you frequently find yourself waiting for the OS to open folders then you will love Immigration.

You can then select more than one file or sequence and either import them all at once or batch replace files already in your project. You can easily assign a frame rate to all imported files at once. Immigrations' Auto-Match Replace algorithm will automatically match files with similar names so you don't have to. It shows you a preview so you can make sure the matches are what you want. It color codes the match depending on how close it is. This is convenient if you name your revised files with a new version number or date.

If your files are already neatly organized in folders, Immigration will duplicate and maintain the folder hierarchy within the After Effects project. You can customize Immigration to only search for certain file extensions, and file age. So for example you can tell Immigration to only display .exr files that are less than an hour old. You can also tell it to include or ignore folder by name so if you would like it to ignore a folder in your hierarchy (an archives folder for example) you can do that easily. 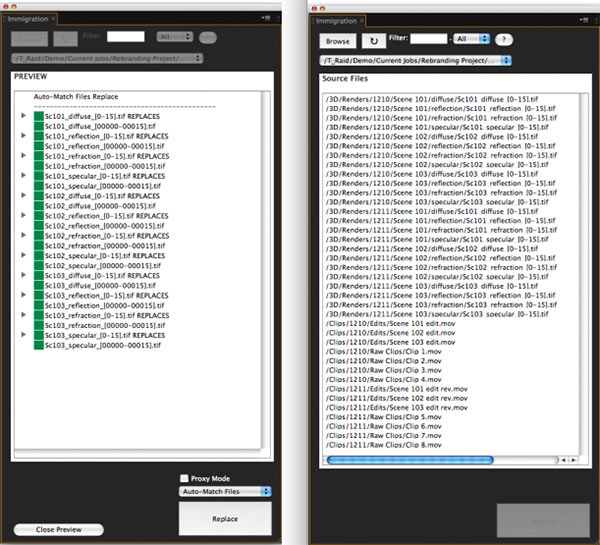