Take your SketchUp models to the next level with Shaderlight

Shaderlight is an interactive rendering software plug-in to SketchUp that lets you create high quality images, quickly and simply. Now with even more simple to use features, Shaderlight now gives you even more control over how you render your SketchUp models, with the ability to animate your SketchUp scenes and render to the cloud.

Whether you’re using Trimble SketchUp Free or Pro, Shaderlight fits seamlessly with your workflow so you don’t have to be a SketchUp rendering software expert to get great results.

Whether you’re an architect, interior designer, 3D rendering expert or using SketchUp for fun, the simple to use yet powerful technology behind Shaderlight will bring your designs to life. 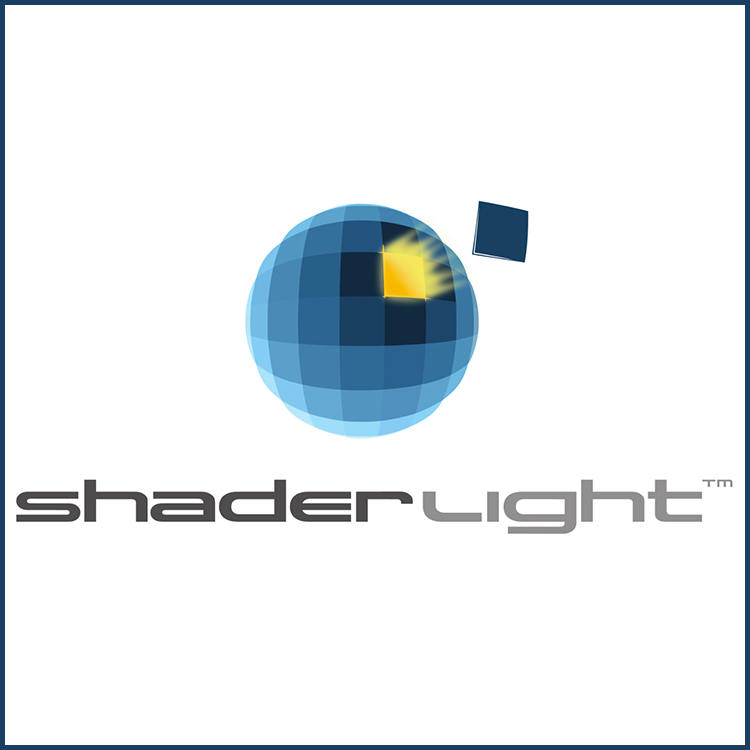 The new material type combines the features of the old Self Illuminating material type and an associated area light and both visibly glows and emits light that illuminates other surfaces, making it much easier to achieve the desired lighting result.

Designed with workflow in mind, the Light Emitting material type has two modes of operation – one that uses the underlying SketchUp material to define the emission color and another that allows the colour to be specified in terms of correlated color temperature.

Shaderlight is the only rendering partner you’ll need for SketchUp.

Simple to learn and easy to use, Shaderlight brings your images to life in a few simple clicks. We’ve taken the complexity out of SketchUp rendering so whatever your profession, you can focus on creating better images and animations straight out of SketchUp.

Our new Timed Access Licenses let you pay for the rendering time you need – whether its to boost rendering capacity for a large project, render a one off image or simply spread the cost of rendering your SketchUp models.  Choose from 30 day, 3 or 6 month licenses.

There is really only one choice of renderer for SketchUp

Shaderlight has been designed to work with both free and pro versions of SketchUp.

Some things to consider

Shaderlight 2020 will install to and run from within SketchUp 2020.

Shaderlight now offers a new material type that combines the features of the old Self Illuminating material type and an associated area light. The new material both visibly glows and emits light that illuminates other surfaces, making it much easier to create accurate light emitting objects.

The Light Emitting material type has two modes of operation – one that uses the underlying SketchUp material to define the emission colour and another that allows the colour to be specified in terms of correlated colour temperature.

Light Emitting is intended to replace both Self Illuminating materials and area lights because they produce the most physically accurate results for less effort. The old material type and area lights have been retained so that existing models continue to work and to support particular non-physical effects (such as invisible light sources).

Some Windows machines with certain versions of Internet Explorer installed displayed the Shaderlight dialogs (such as Render Settings and the Light and Material editors) with incorrect layout and inoperative controls, making them difficult or impossible to use. We have addressed all of the problems that we could reproduce on our systems but we would be interested to hear of any remaining issues.

Certain texture types are unable to be exported by Shaderlight and the presence of such textures would prematurely abort the export process, resulting in renders with missing elements or crashes of the Shaderlight render process. These models should now export and render to completion, although the affected textures are still not exported – geometry with the affected textures will render with a flat colour for now. We continue to work on addressing the actual texture export.

Read the press release for Shaderlight 2020

What can you expect to see when you upgrade to this release?

Shaderlight supports the 2019 release of SketchUp.

To make it easier to create lights based on existing lights in a model, the Shaderlight light placement tool now consistently uses the settings of the most recently selected light.

In previous releases, the ‘chalk’ render mode would make all objects appear white and opaque. In this release, there is a new ‘Transparent glass’ option when chalk mode is active, which makes most transparent objects render in their non-chalk mode. This can make form and massing studies more intuitive when large areas of transparency are used.

The Shaderlight Render Settings dialog now has an option to save the current settings with the active SketchUp scene, making it possible to save different settings for all or some of the scenes in a model.

If a long-running render has been started, it will no longer be interrupted by the computer entering idle sleep mode. Idle sleep is re-enabled after the render completes and the computer can always be forced to sleep manually.

On macOS, the operating system can put a process into ‘App Nap’ if none of its windows are currently visible. This drastically reduces the amount of CPU time it receives and, in Shaderlight’s case, effectively pauses rendering if you switch to another program and cover up the Shaderlight render window. Shaderlight will now ask the operating system not to put it into App Nap while a render is in progress, to ensure that the render completes in a reasonable time.

This increasingly common resolution is now easier to select.

The previous release of Shaderlight introduced a warning if you attempt to close the Shaderlight render window while a render is underway, to help prevent unintended loss of progress. This release extends that warning to the use of the ‘Quit Shaderlight’ menu option. 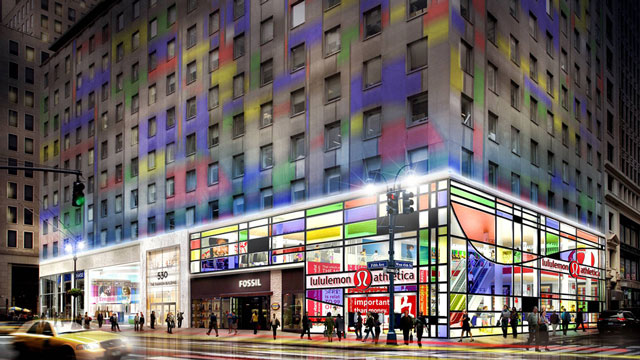 If you have a Shaderlight 2014 (v3) license, simply download the new software and your existing license will activate the new features.

Shaderlight 2014, which we released in March this year, gave you full support for all the new things in SketchUp 2014.  We are now pleased to make available the first update to Shaderlight 2014, which includes sought-after improvements to key features.  The release focuses on delivering you even more impressive rendering straight out of the box.

So what can you expect to see in this update?

Shaderlight’s auto-exposure system enables you to to achieve photo-realistic exposure with the click of a button.  It has now been enhanced so that it doesn’t try to excessively lighten dark objects, or darken light objects when rendering.

• Improved behaviour of background brightness control when auto-exposure is enabled

In another update to our auto-exposure feature, Shaderlight provides greater control of background brightness by no longer compensating for the changes you’re making when auto-exposure is on.

Shaderlight’s popular animation feature has been improved by the ability to export animations directly as movie files.  It is now possible to render your frames and create a .mov or .wmx file all within Shaderlight. 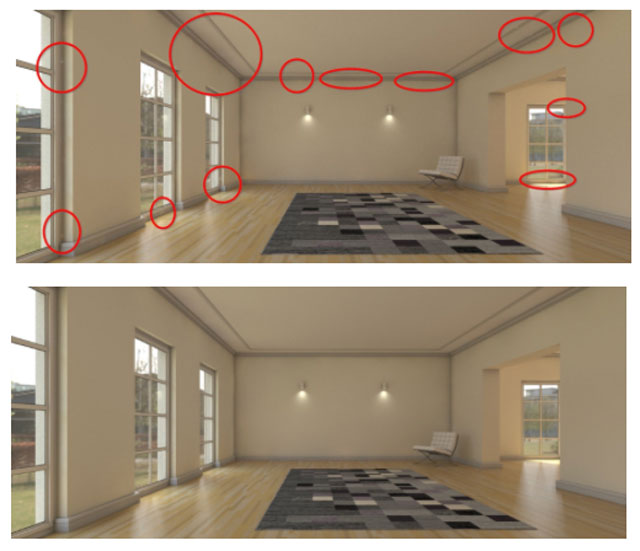 Shaderlight now delivers faster rendering.  The extent of the improved performance will obviously depend on the size and complexity of your render but you should see a marked improvement on the average render.

Shaderlight’s GI setting can now be used to render scenes where Skylight portals are not being used.  While we continue to recommend the use of Portal Lights to enclose interior areas for maximum quality and performance, this new feature is particularly useful when rendering the undersides of roofs and overhangs.

You may have experienced the appearance of annoying light spots or flares when rendering internal scenes using global illumination.  Well, no more.  Thanks to the further improvements we’ve made to Shaderlight’s global illumination feature, the majority of light spots have been eliminated.  The images below show a before and after illustration of this fantastic update.