anima® ALL is the complete solution to populate your architectural visualization scenes and CG projects with unlimited access to anima® PRO and thousands of metropoly® photorealistic characters to give life and scale to your architectural projects.

WE ARE ALL UNIQUE, YOUR PROJECTS TOO.

* Each model includes 5 color variations, for a total of 10500 costume combinations.

Get all the tools you need to populate your images easily so you can concentrate on what’s most important: your architectural project.

ALL THE 3D MODELS

Enjoy unlimited access to all metropoly® 3D models to create the image exactly as you wanted it and with that specific 3D character you were missing.

ALL AROUND THE WORLD

Access all anima® features and metropoly® 3D models from anywhere, so you can freely create the best images and animations.

Manage, control, and customize your anima® ALL licenses so your entire team of artists and collaborators can work together no matter where they are located.

Find the subscription plan that best suits your needs. Whether you are a freelancer, a small studio or a large company, anima® ALL is tailored to you! 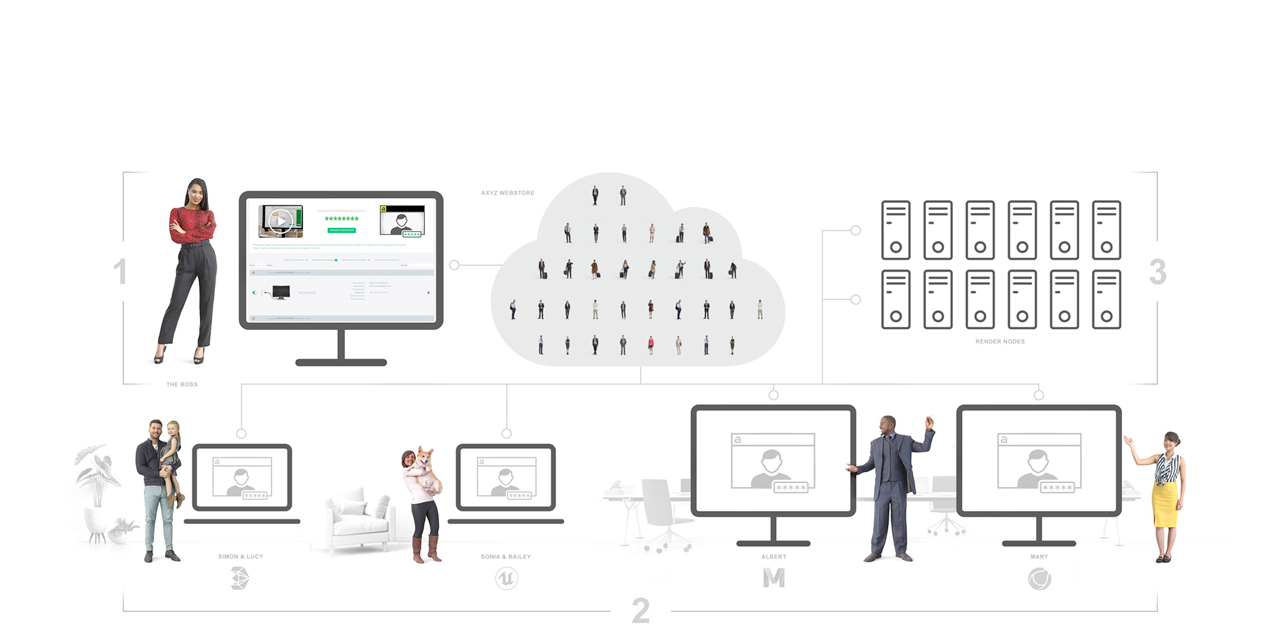 Get the most out of anima® ALL by managing and organizing your entire team from a single control panel, from which you will give access to all the 3D models your artists will need for their projects.

Get unlimited access for your entire team to thousands of 3D characters, animations and all the anima® PRO tools you need to bring your 3D images and animations to life!

Create and send an optimized resource package ready to render seamlessly either on your own renderfarm or on third-party rendering services.

You and your projects are unique and that’s why we offer you to configure your subscription to suit your specific needs. Whether you are a freelancer, a small studio or a large company, anima® All adapts to you.

What is the duration of the contract?

The duration of the contract is annual from the date of contracting the service. At the end of the term, you will have the possibility to renew the service for another year.

Is anima® ALL compatible with my 3d software?

If you use 3ds Max, Cinema 4D, Maya or Unreal Engine you will be able to import and render the scenes and characters generated with anima® through the plugins supplied with the product.

IT WILL NOT BE POSSIBLE TO CONVERT THE SCENES AND CHARACTERS TO ANY STANDARD FORMAT (FBX, COLLADA, ALEMBIC).

Can I cancel at any time?

No, the anima® ALL contract requires a minimum annual commitment. You can terminate the contract after one year by simply skipping the service renewal.

Can I add additional seats?

Yes, you can add new seats for your team professionals at any time. You will be charged for the proportional part until the renewal date.

anima® ALL includes all metropoly® 3D People rigged, ready-posed, ambient and 4D Digital Humans® character libraries, as well as anima® PRO and all the software needed to create the best images in your favorite 3D software.

Can I use anima® ALL on multiple computers?

Yes, each seat you subscribe to can be used on 3 (three) different computers, as long as they are not used at the same time. The administration of your computers can be done from the subscription control panel.

anima® has been designed to run on a wide range of hardware and software configurations, although performance levels will vary depending on the processing speed, graphics card and memory of the system.