The revolutionary new Blackmagic Pocket Cinema Camera 4K is the camera you’ve been asking for! It features an all new handheld design that puts the latest advanced digital film technology into the palm of your hand! The Blackmagic Pocket Cinema Camera 4K has a 4/3 size sensor, 13 stops of dynamic range and dual native ISO up to 25,600. That means you get stunning HDR images and incredible low light performance

The external controls give you quick access to essential functions, while the large 5-inch touchscreen makes it easy to frame shots, focus accurately and change camera settings. Images are recorded onto standard SD/UHS-II or CFast 2.0 cards in RAW and ProRes at up to 120 frames per second! In addition, the Blackmagic Pocket Cinema Camera 4K has an MFT lens mount, built-in microphones, mini XLR input, full-sized HDMI, 3D LUT support, Bluetooth, USB-C Expansion Port and more!

The new Blackmagic Camera 6.2 update adds support for Blackmagic RAW to the Blackmagic Pocket Cinema Camera 4K, giving you the quality of full, visually lossless camera RAW images, with the size and speed of traditional video file formats! Because the files are so small, you’ll be able to record much longer programs on the media you already own. You’ll also be able to change parameters such as exposure, saturation, midtone detail, and more. Best of all, just like traditional RAW formats, these changes are completely non-destructive! You’ll be able to choose between 3:1, 5:1, 8:1 and 12:1 constant bit-rate recording or between constant quality Q0 and Q5 recording. With Blackmagic RAW 12:1, you can record more than 2 hours of 4K DCI footage to a single 256GB SD UHS-II card, giving you stunning cinematic quality images on incredibly small, inexpensive cards!

Now you can shoot anything in 4K!

Designed to be portable, packed with features and fully expandable!

The portable handheld design of the Blackmagic Pocket Cinema Camera 4K gives you incredible mobility without sacrificing features. The highly compact form factor features a carbon fiber reinforced composite body that makes it extremely durable and lightweight so you can take it anywhere. You get a super bright 5” screen, 4 built-in microphones, built in recorders and external buttons and dials that give you fast access to the most important functions. That means you can quickly check framing and focus, capture audio and record your files without having to carry around extra monitors, microphones, recorders, and cables. You also get lots of mounting points, a mini XLR input with phantom power, Bluetooth control and more. With the Blackmagic Pocket Cinema Camera 4K, you get a fully featured portable digital film camera that’s flexible and expandable!

The Blackmagic Pocket Cinema Camera 4K features a full size 4/3 sensor that gives you 4096 x 2160 resolution with an incredible 13 stops of dynamic range for true digital film quality. Because it’s full size, the 4/3 sensor reduces crop factor, giving you a wider field of view. It also has dual native ISO up to 25,600 so you get incredible low light performance! The Blackmagic Pocket Cinema Camera 4K can record at up to 60 frames per second in 4K and up to a massive 120 frames per second for windowed HD. The camera features fourth-generation Blackmagic Design color science with film, video and extended video modes. The new extended mode gives you the latitude of film with the convenience of video, so you get great looking images without having to do a lot of work in post-production!

Next generation codec with the quality of RAW and the speed of video!

Blackmagic RAW is a revolutionary, next generation codecthat gives you stunning visually lossless images, extensivemetadata support and highly optimized GPU and CPU accelerated processing, constant quality and constant bitrate encoding options and more! That means you getthequality and workflow advantages of RAW formats with thespeed and ease of use of a video codec. With Blackmagic RAW, you can choose compression levels up to an astounding 12:1 and still get stunning images that can be used for feature films, documentaries and broadcast programming! When it comes to post production, you get total control over RAW settings such as ISO, white balance, exposure, contrast and saturation in DaVinci Resolve.

Compatible with your current lenses!

The Blackmagic Pocket Cinema Camera 4K uses the same MFT (micro four thirds) lens mount as the original Pocket Cinema Camera so you can use the lenses you already have! The MFT lens mount was designed specifically for smaller camera bodies with shorter flange focal distance. This means you can get high-quality professional lenses that are much smaller than ever before! The MFT mount is extremely flexible and allows for different lens adapters. You can get adapters for PL, C, EF and more, so you can use lenses from manufacturers such as Canon, Nikon, Pentax, Leica, and even Panavision!

When it comes to recording, the Blackmagic Pocket Cinema Camera 4K gives you 3 kinds of media to choose from. Images can be recorded on to standard SD cards, faster UHS-II cards or CFast 2.0 cards. High definition video can be recorded using regular inexpensive SD cards. Higher performance UHS-II cards can be used for recording Ultra HD in ProRes at up to 60 frames per second and RAW at up to 30 frames per second. CFast cards can record 12-bit RAW at all supported frame rates. For longer recording times, you can also record directly to an external SSD or flash disk using the built-in USB-C Expansion Port! Best of all, there’s nothing proprietary. The files will work with all professional post-production software. You can even mount the media cards on your computer and start editing directly from them using the included DaVinci Resolve Studio software!

The Blackmagic Pocket Cinema Camera 4K features an innovative high-speed USB-C Expansion Port. USB-C is fast, flexible and even provides power, so it’s quickly becoming standard on all modern computers and devices. The massive bandwidth of USB-C makes it possible to connect external accessories such as flash drives and SSDs for significantly longer recording times. This can be important when shooting high quality lossless 12-bit RAW or even high frame rate 60 frames per second 4K. Best of all, when you’re done shooting you can use the same drive for editing and post-production!

Get the same advanced features as larger cameras!

The Blackmagic Pocket Cinema Camera 4K uses the same Blackmagic OS as URSA Mini. That means you get the world’s most advanced camera operating system and many of the same professional features found on larger cameras! If you’re just getting started, you can learn how to use the Pocket Cinema Camera 4K today and move up to an URSA Mini when you’re ready! If you already use an URSA Mini, there’s nothing new to learn! You get a modern touchscreen interface that uses simple tap and swipe gestures to adjust settings, add metadata and view recording status. The Blackmagic OS gives you incredible control of advanced camera features including 3D LUTs for both recording and monitoring, HDR output via HDMI, metadata entry, custom presets, extended video format, Bluetooth remote control, external timecode from the audio input, RAW recording and more! 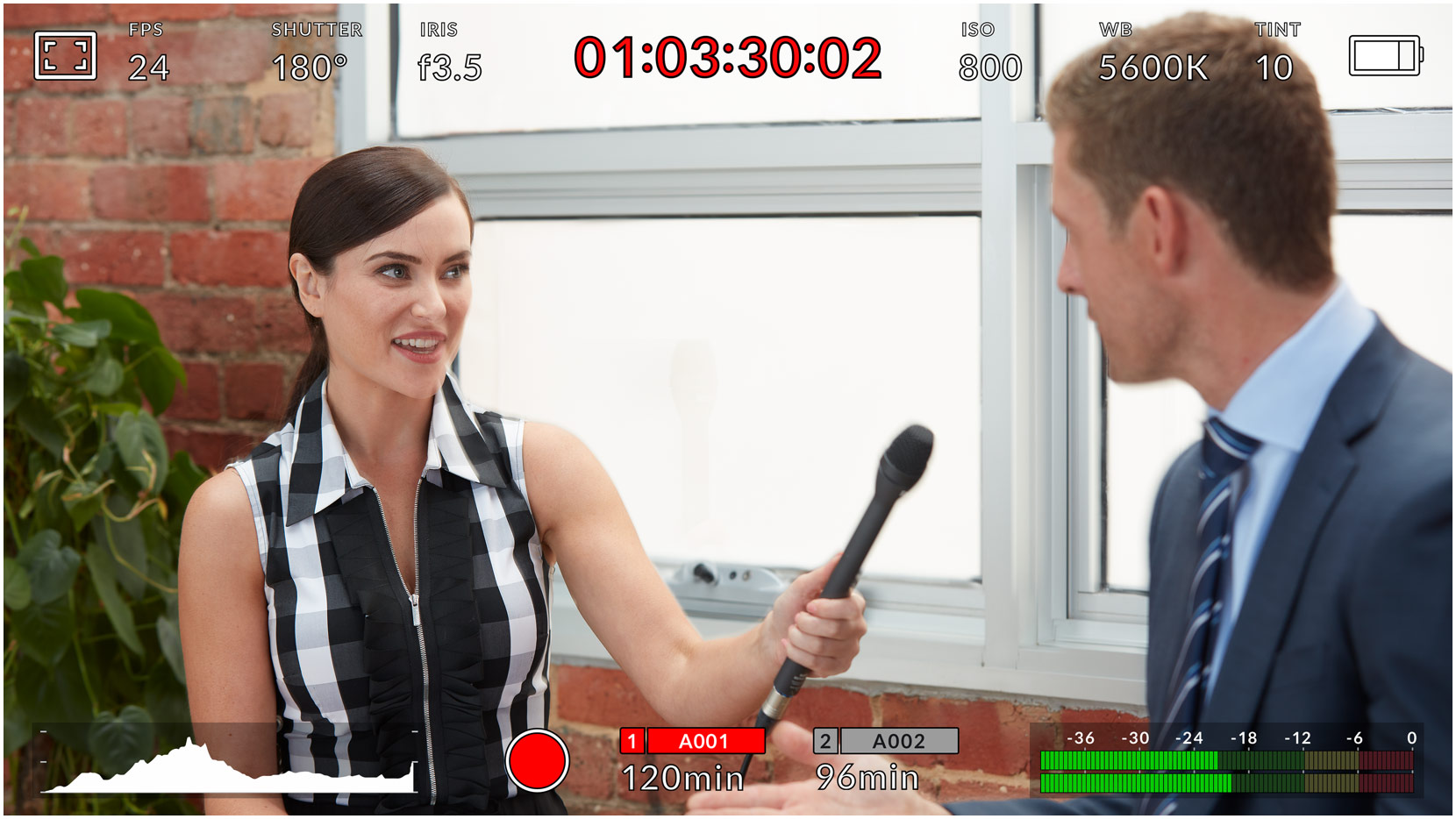 The back of the Blackmagic Pocket Cinema Camera 4K features a super bright, large 5-inch touchscreen. This makes it easy for you to frame shots and accurately focus, without having to carry around an external monitor or viewfinder! You get the same menus and interface found on URSA Mini cameras, including on-screen overlays for recording parameters, status, histogram, focus and peaking indicators, and playback controls. In addition, you can apply 3D LUTs so you can monitor the shot with the desired color and look. Not only can you use the 3D LUT for monitoring, it can even be baked into the recorded footage. There’s even a speaker located near the screen, which makes it easy to quickly playback and review shots on set! 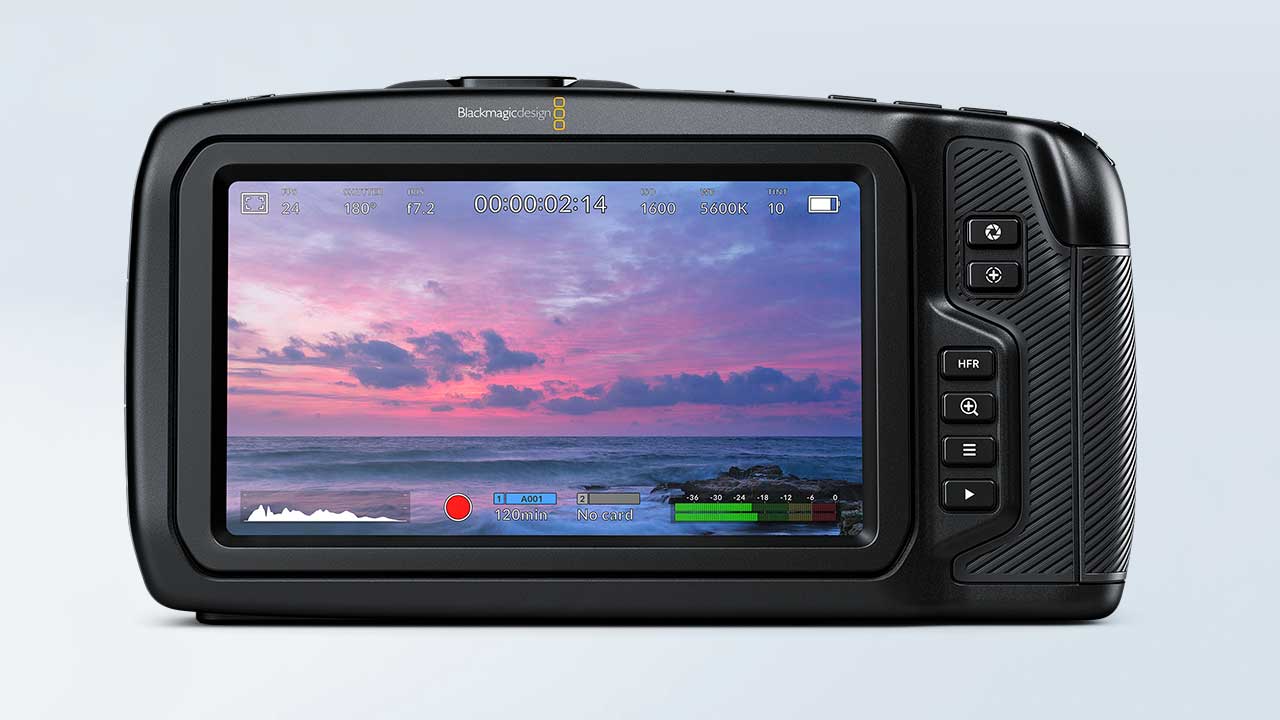 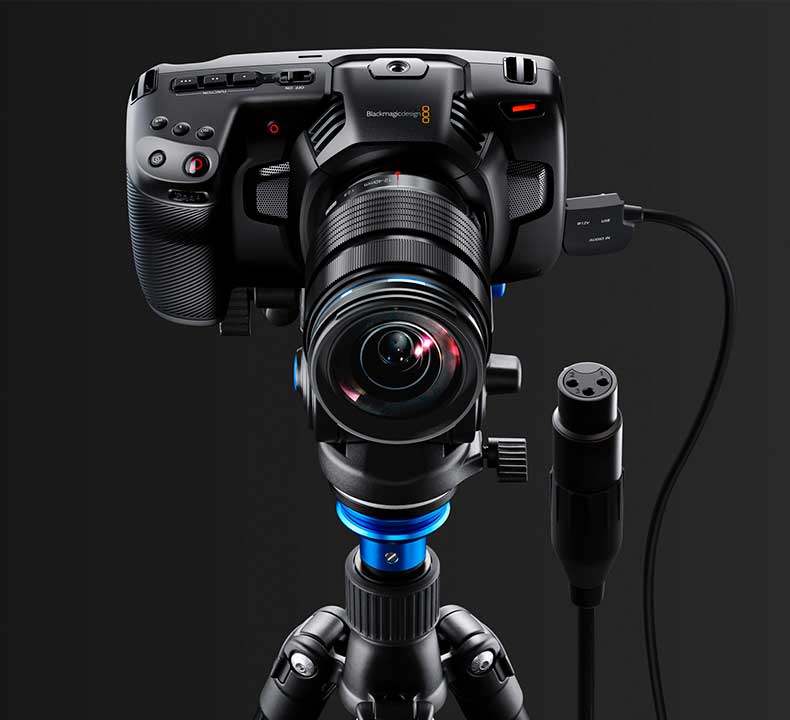 The Blackmagic Pocket Cinema Camera 4K gives you professional high fidelity audio recording so you don’t have to carry around a separate sound recorder! The camera features a mini XLR input with 48 volts of phantom power for connecting professional microphones such as lapel mics and booms. There are also built-in microphones with an extremely low noise floor so you can capture great sound on location! There’s even a 3.5mm stereo audio jack so you can use different types of video camera microphones.

Even though it’s small and portable, the Blackmagic Pocket Cinema Camera 4K has a full-size HDMI connector built in! You get support for advanced features such as HDR output and a clean 10-bit output with on-screen overlays showing full camera status, making it perfect for on set monitoring. There’s also a mini XLR connection with 48 volts of phantom power for attaching professional microphones, a 3.5 mm video camera style microphone input and a professional locking DC power connector! 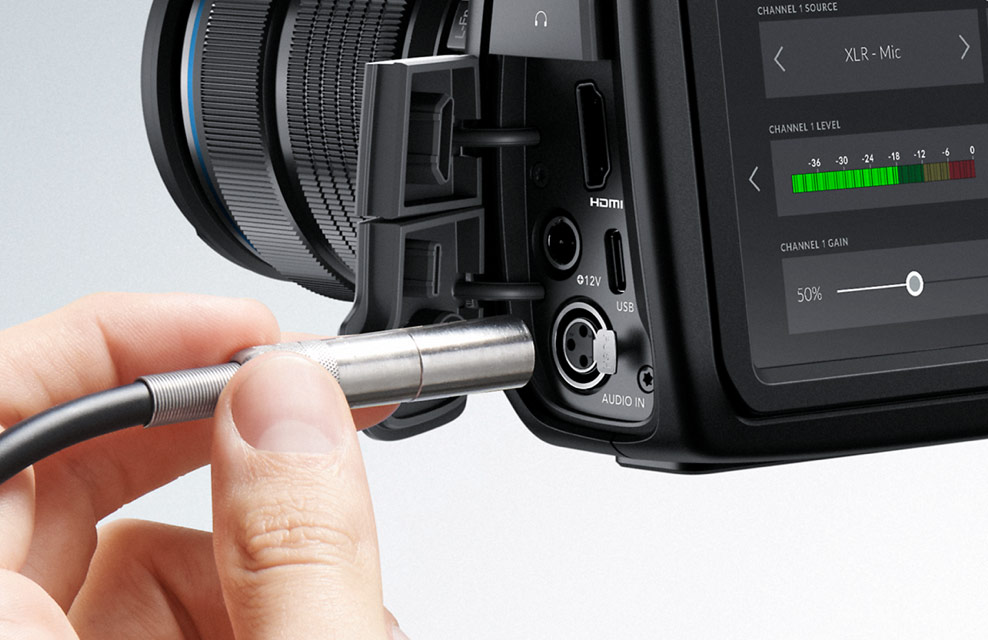 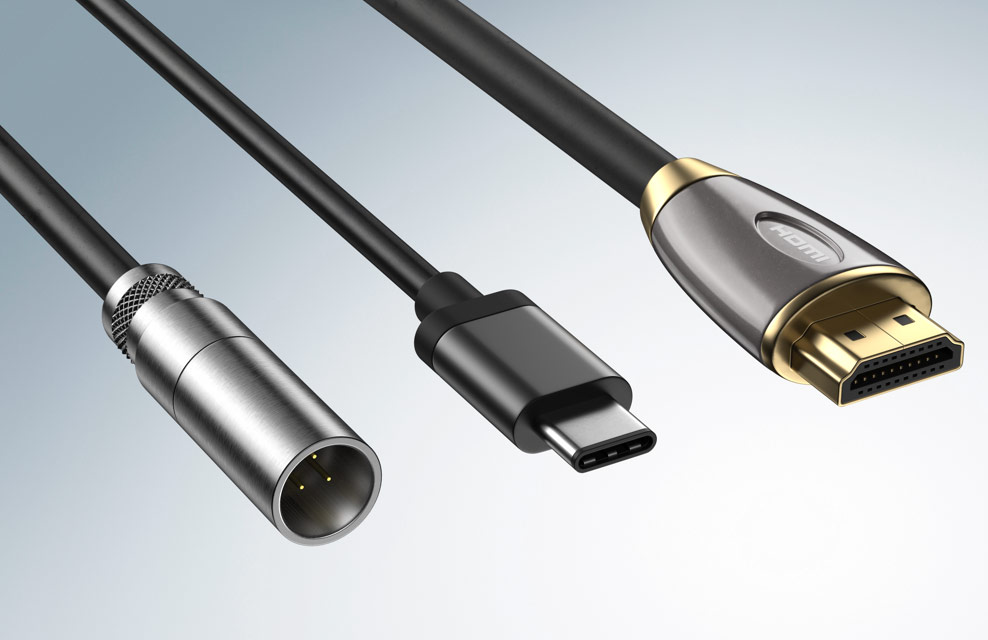 You get a full-size HDMI connection as well as a high-speed USB-C expansion port for significantly longer recording times to external SSDs.

Battery, DC, and USB-C so you can shoot all day long!

The Blackmagic Pocket Cinema Camera 4K uses standard removable LP-E6 type batteries. You also get a locking DC power connector so it can’t be accidentally disconnected in the middle of a shoot. The included 100 – 240-volt plug pack can be used to simultaneously power the camera and charge the LP-E6 battery. Plus, it includes international socket adapters so it can be used anywhere in the world! The USB-C Expansion Port accepts power so you can charge the battery from portable battery packs, a mobile phone charger or even your laptop computer! The Blackmagic Pocket Cinema Camera 4K gives you a wide range of flexible power options so you can shoot all day!

The Blackmagic Pocket Cinema Camera 4K includes a full version of DaVinci Resolve Studio, which is a complete postproduction solution. You get the world’s most advancedsolution that combines professional editing, colorcorrection, audio post and visual effects all in one software tool! DaVinci Resolve is used to finish more Hollywood feature films than any other solution, so you'll get the best possible post production tools to edit native video from your camera and retain every bit of quality. Whether you’re working on major Hollywood feature films,episodic television productions, music videos, commercials or even the latest YouTube shoot, DaVinci Resolve Studio gives you a completely lossless workflow for native editing, color correction, effects, audio and delivery, soyour video always looks as good as possible! 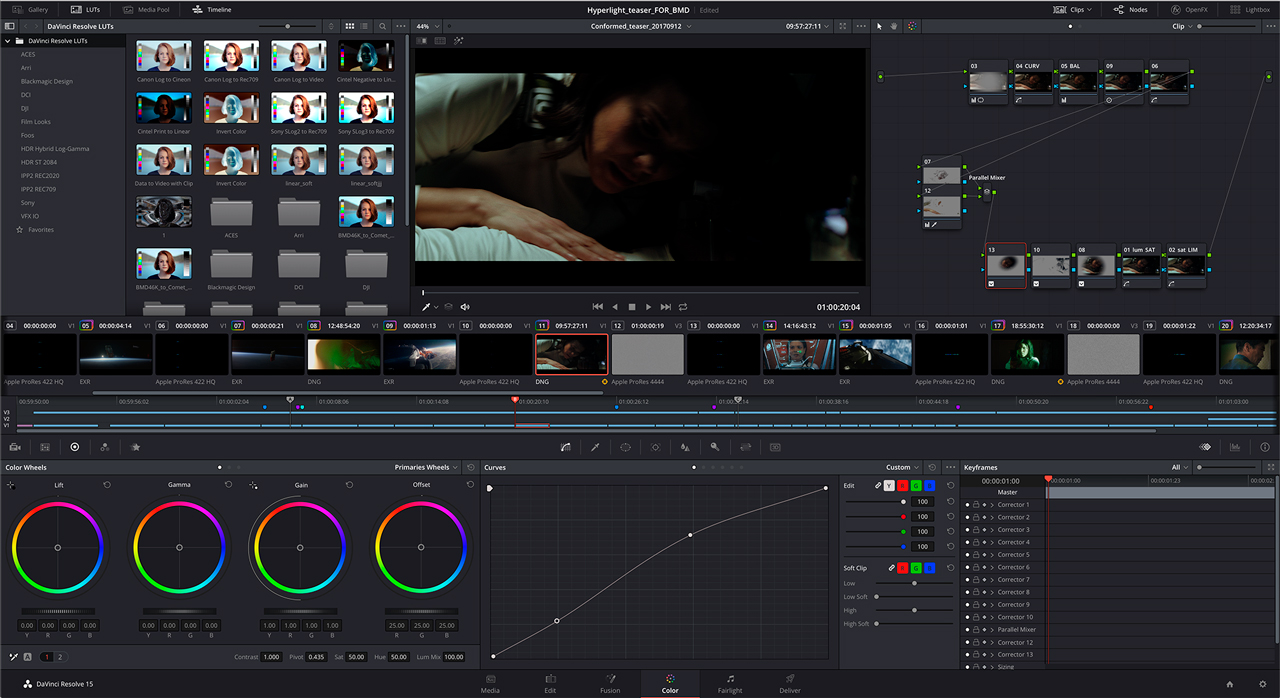 Media Format
Can format cards to ExFAT for Windows and Mac or HFS+ for Mac (file systems). 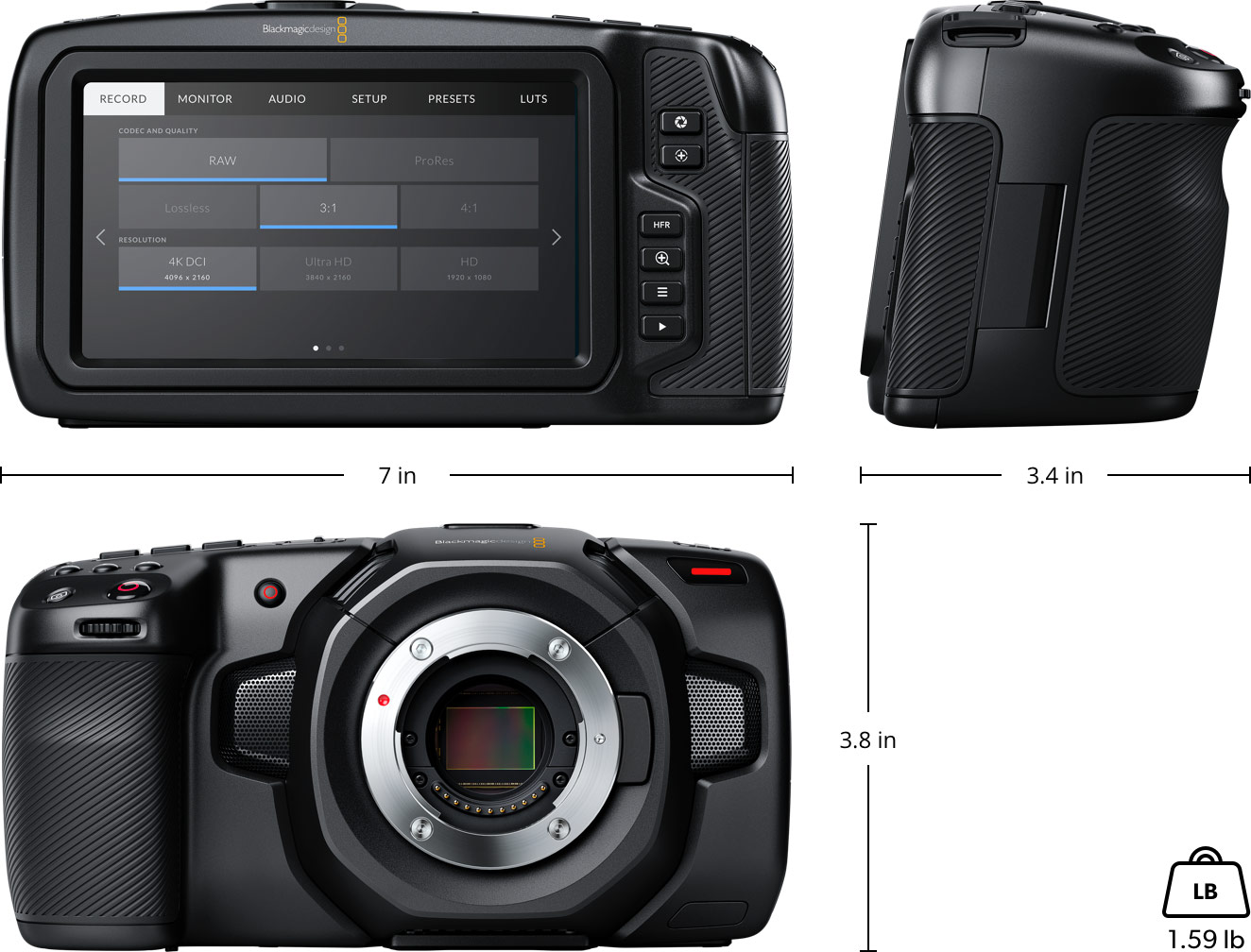