A perfect match: Apples and Orange…This is THE classic OrangeVocoder effect used on popular tracks played on every radio station in the country. Its unmistakeable sound that you won’t find anywhere else has made it Prosoniq’s top selling product for over ten years! First released in 1998 as a VST plug in the OrangeVocoder has quickly gained a reputation as being the single most flexible and transparent sounding vocoder ever to be available as a plug-in. 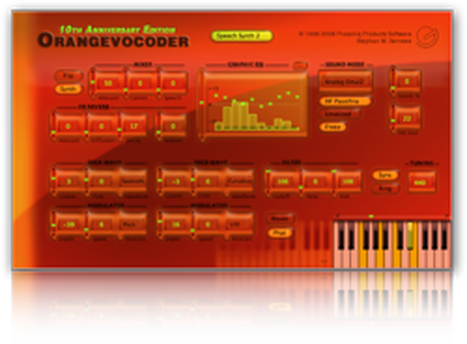 Its unique sound can be heard in countless movie productions and in many popular songs and is easily recognized. The sound of Prosoniq’s OrangeVocoder was originally modelled after a famous hardware device and has been approved by one of the most popular German vocoder manufacturers at the time. Even 10 years later it is still one of Prosoniq’s top selling products and is getting rave reviews all over the world.

The 10th Anniversary AudioUnit Edition takes the vocoder one step further by making it AudioUnit compatible and adding a wealth of features that the original product didn’t have. The new version is AudioUnit compatible on both the PPC and Intel Macs, quadruples its internal voices, incorporates full MIDI control and supports all project sample rates. But it doesn’t end there: in addition to the features of the previous versions OrangeVocoder 10AE also offers 8 unique sound modes each with a distinct basic vocoder sound, voiced/unvoiced detection linked with a noise synthesizer, a filterbank freeze option and a HF passthru mode.

New in this AudioUnit edition of the vocoder:This is a comparison with the original version 2.x VST/RTAS vocoder