The industry’s leading rotoscope and paint tool is now packaged with major features for compositing. Silhouette 2022 offers 400+ nodes including premier tools Sapphire, Mocha Pro and Particle Illusion wrapped into one integrated node based package. Silhouette’s been integral to Hollywood’s biggest titles for over 15 years; most recently with Dune, Spider-Man: No Way Home, Free Guy and The Mandalorian. Designed by visual effects artists, Silhouette has won Academy and Emmy Awards and is a member of the Netflix Production Technology Alliance.

New Surface tool and DOD update with cropped tracking for precision and speed.

Silhouette 2022 includes under the hood enhancements that improve general workflows for professional post-production and VFX studios.

AUTO PAINT FOR SPEED AND RELIABILITY

Now including the Mocha Pro node! The fully-featured Silhouette interface for roto, paint, and compositing can also be launched as a plugin from standard VFX applications: After Effects, Premiere Pro, Nuke, Fusion, Resolve, Flame, and VEGAS Pro.

The Silhouette multi-host plugin is included with all Silhouette standalone application licenses or can be purchased as a separate option.

Not sure which option is best for you? View our compare chart. 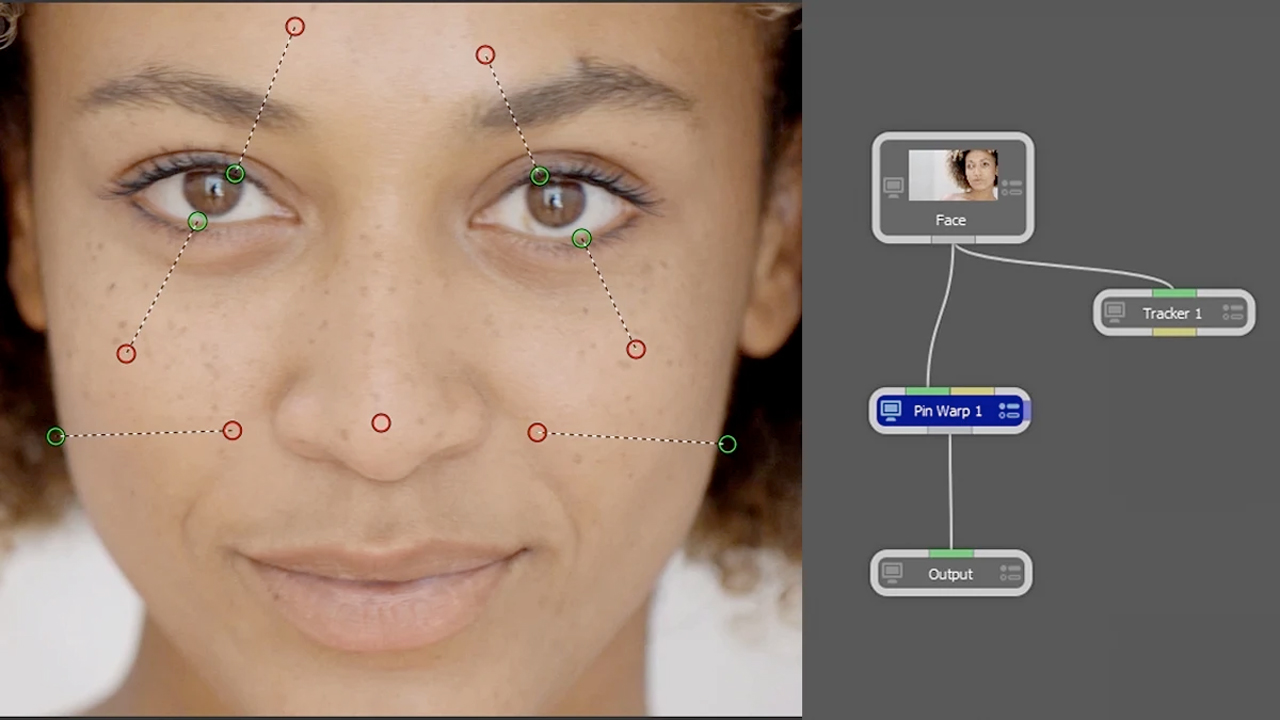 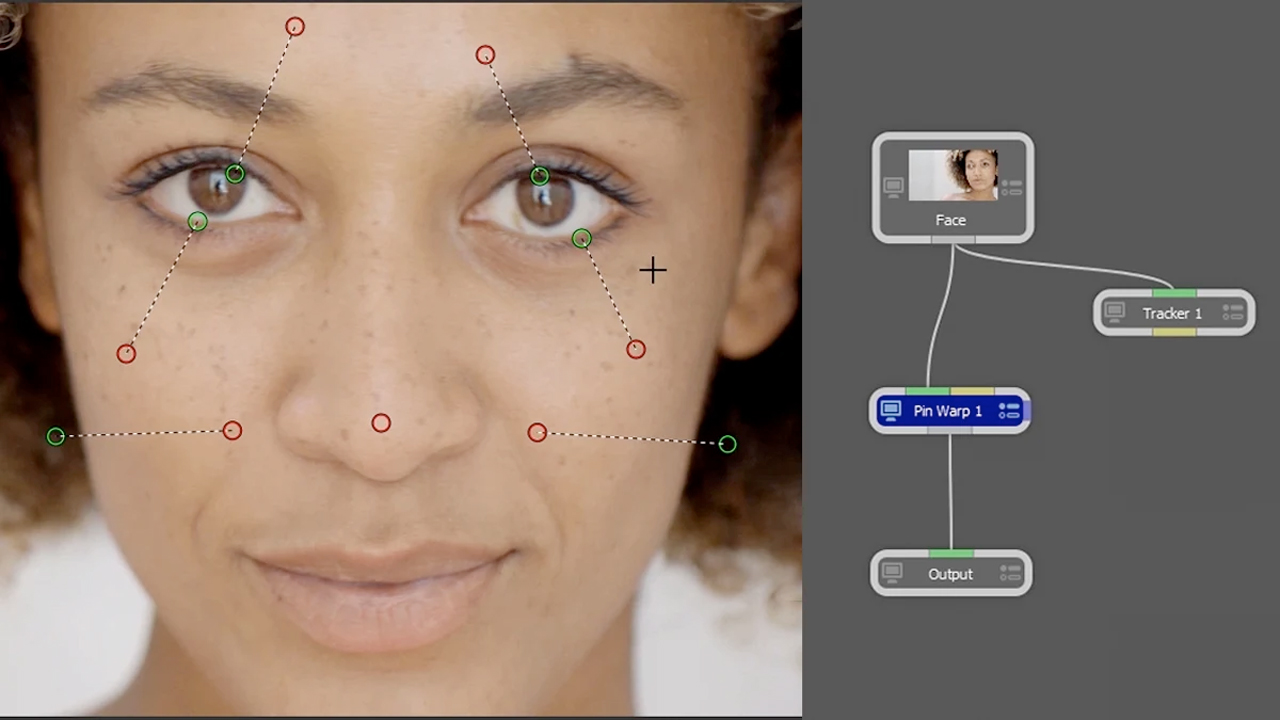 With a rich history on some of the world’s most famous music videos and effects shots, unique “shape-to-shape morphing transitions” can be timed per layer with interactive previews for fast flexibility. Intro to Morphing Video

Pin Warp is perfect for beauty work, allowing user-defined image areas using pins while leaving other areas untouched. Adjustments can range from subtle nip and tucks to something more obvious like repositioning an arm or leg. Watch Now 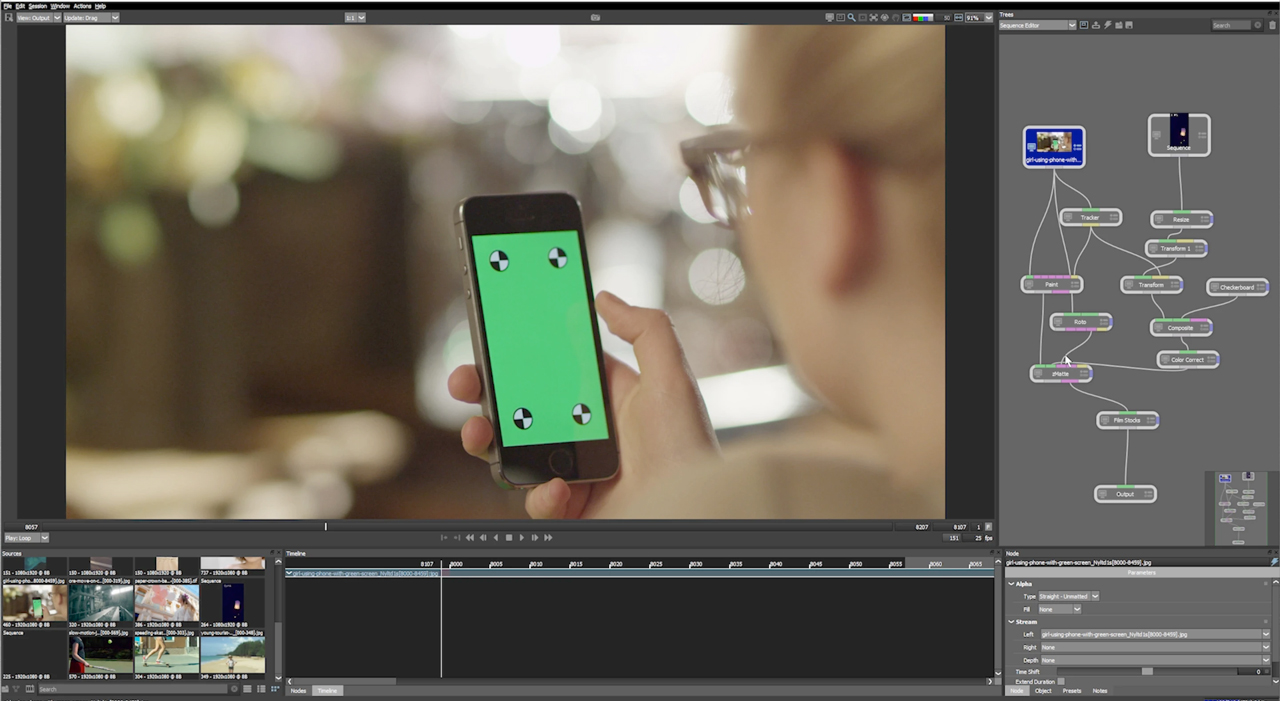 The powerful zMatte and Power Matte nodes use proprietary matte extraction techniques that handle the most difficult keying and matting challenges, including shots with fine hair detail, smoke, or reflections. 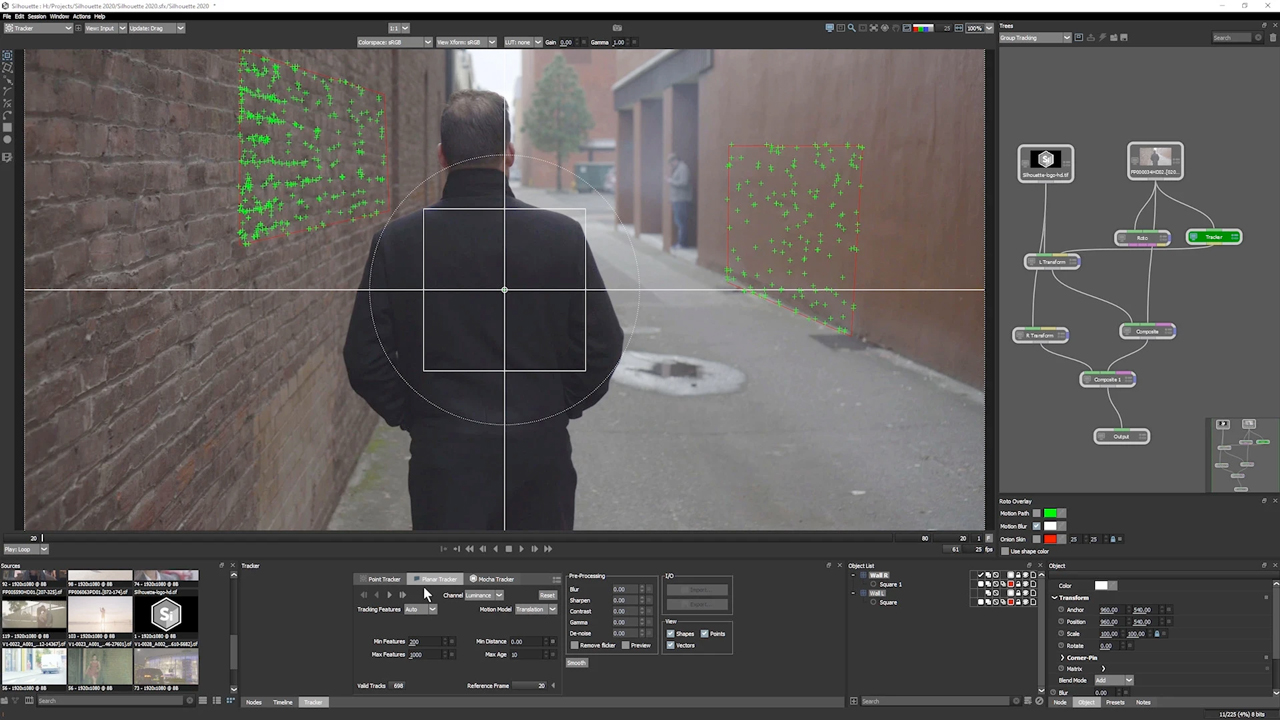 The industry’s most powerful tracking drives Silhouette’s animation system and can be applied to speed up paint, roto, warp, and stabilization tasks. Choose from point tracking, native planar tracker, or the award-winning Mocha Pro node, now included in Silhouette 2022.

Note: The Silhouette plugin option includes the Mocha Pro node, but does not include Particle Illusion or Sapphire effects.

Changes
Grain Size Smaller Than .5
The Grain > Size went no lower than .5. The minimum size is now 0.1.

Hold Node Frame Value Not Preserved
The Hold node Frame value was not preserved after a project restart. It always reset to 0.

Roto Delete Crash
Silhouette would crash after creating multiple layers and then pressing the Delete icon in the Object List.

Timebar Frame Markers Didn’t Disappear After Delete
After deleting frames in the Auto Paint window, the frame markers did not automatically delete. You had to drag the Timebar to get them to disappear.

Using DOD Or Crop On FG Before Composite Clipped FG
If a DOD or Crop node was adjusted smaller than the Session size and inserted on the FG input of a Composite node, the FG was cropped.

Known Issues
Trimmed Footage in Premiere Pro Loaded Entire Clip
If a clip was trimmed in Premiere Pro, the entire clip was loaded into the Silhouette Paint plug-in instead of the trimmed clip. This is a Premiere Pro limitation and the issue has been logged with Adobe.

Note: Alt-clicking still adds a tracker wherever you click.

When dragging on a value field with an edit range different than the display range, for example the OCIO Gain control and some Sapphire controls, the value can now be Alt-dragged all the way to the edit range limits.

Silhouette Paint is the industry’s first paint and tracking plug-in designed to bring best-of-breed, 32 bit, high dynamic range paint tools to editing and effects applications. Artists can now access Silhouette’s professional sequence-based paint tools inside their host of choice including Adobe After Effects and Premiere Pro, The Foundry’s NUKE, Blackmagic Fusion & Resolve, Autodesk Flame and more. Available on macOS, Windows, and Linux. A Silhouette standalone license can run either the standalone or plug-in.

Time > Hold Node
The new Hold node repeats the specified frame for the duration of the session. Useful for freezing a single painted frame for a clean plate, among other things.

Exporting Mocha Tracked Layers as 4 Point Corner-Pin
You can now export a Mocha tracked layer as a 4 point corner-pin.

Onion Skin
A Viewer > Onion Skin mode was added to the Viewer. Onion Skin does a mix, as defined by the Mix value, between the current frame and either previous or later frames. This is useful for creating frame by frame, hand-painted animations.

Clone > Red Triangle/Exclamation Point
The red triangle/exclamation point icon in the Paint > Clone tabs was changed to a green dot.

Cursor Position Color Values
The cursor position color values when in the Paint node are now displayed in the Status Bar.

Zoom Default to Fit
The default zoom is set to Fit when activating a source or Session.

Alpha Only Render Issues
Alpha only renders from Silhouette either crashed when re-imported or couldn’t be displayed.

Freehand Tool In Tracked Layer – Spline In Wrong Place
The Freehand tool was not using the layer transform during shape creation. This could also affect Magnetic shapes in certain cases.

Layer Center Motion Vector Used Layer Center
In the Tracker, when viewing the motion vectors for a selected layer, the center of the layer rectangle was used instead of the layer’s position + anchor.

Flare Editor Crash
Clicking in the Flare Editor Viewer, but not on a control point, caused a crash.

Occlusion Crash
When View > Occlusion was selected with no Occlusion input, Silhouette crashed.

License Window Loop After Deactivation
After deactivating, selecting Cancel cycled between the Silhouette license window and the Boris FX license tool. The only way to stop it was to activate or run in demo mode.

Automatically Created Track Layers Not Really Selected
If you had a selected shape in the Mocha tracker and tracked, a new layer was created, the shape was placed in the layer and it was tracked. After tracking, the layer appeared to be selected, but the track controls were grayed out. To track again, you had to click on the selected layer to really select it and you could then track again.

Mocha Tracker With GPU Enabled In Hi-Res Sessions
The integrated Mocha tracker drifted with the Tracker > Mocha > Use GPU If Available preference enabled.

Multi-part EXR File Crash
EXR layers containing only alpha or only two channels caused a crash in the Sources window when set to Thumbnails view.

OCIO Initialization Failure
When using the ACES OCIO config, the OCIO processor would not initialize because the sRGB view was named differently. This could cause a crash on startup.

Clone > Interactive and Region
With Interactive enabled, turning Region on and then off caused Interactive to not work, but the Interactive button was still highlighted.

Cutout Brush Not Saving
If you painted a stroke with the Cutout brush, the result was not saved on the frames you painted on.

Paint Only – Undo Strokes Appear
Strokes removed with Undo appeared in the Paint Only output.

Arrow Cursor Sticks On – Mac
When using a pen/tablet on Mac, if you slowly moved over a sash, the cursor changed to a split icon and stuck on. You had to hit Esc to get rid of it.

Stroke Tool Not Selecting Paint State
When using the Stroke tool, the associated paint state changes, like brush size and opacity changes, were not selected.

Tracker Node > Black Viewer
When hooking a source into a Tracker node, the Viewer was black until the cache was cleared.
Viewer > Node Selector Pop-up Menu Did Not Open

The Viewer > Node selector intermittently did not open.
Weighted Keyframe Crash
If you there was only 1 keyframe, pressing Alt-K and then OK or Cancel caused Silhouette to crash.

Bug Fixes
Legacy Feather Did Not Work
Legacy feathering did not work.

ROI Keyframes Not Saved With Project
ROI keyframes were not saved with the project.

RotoOverlay Was Opening By Default
The RotoOverlay window was opening by default and was not supposed to.

Transform Node
When Viewer proxy resolutions were used with a Transform node, images of a
different size than the Session were blank in the Viewer.

Features
Copying/Pasting Mocha Trackers & Shapes to Silhouette
Shapes and trackers copied to the clipboard in Mocha can now be pasted into a Silhouette Roto node. Requires Mocha Pro 7.0.2 or later.

Changes
Make Disabled Nodes More Obvious
To make it clearer when a node is disabled, there is now an X over the node while disabled.

Mocha Tracker Status Window – Initializing Message
When using the Mocha tracker, an “Initializing” message appears in the tracking status window while the GPU shaders compile prior to tracking.

Paint > Subpixel > Speed Up
Some Paint > Clone brush filters, like Sinc, take longer to process. If there is no transform and no Clone offset, Silhouette will use a fast processing path regardless of the Subpixel setting.

Trees Window Won’t Zoom In Until You Zoom Out
You had to zoom out before you could zoom in to the Trees window.

Windows Crash On Startup
Windows could crash or exit unexpectedly during startup.

Breaking Down the VFX of Wendell and Wild

Watch Breaking Down the VFX of Wendell and Wild on Boris FX Live, Thursday, November 10th at 2 pm EST. Or, catch the archives later.

Katie Morris, a digital VFX artist shows how she uses Silhouette and Mocha Pro together to tackle advanced rotoscoping, paint, and more.

SilhouetteFX was created by the developer of Elastic Reality, Perry Kivolowitz.  Mr. Kivolowitz contacted me a few days after this article was first published, thanking me for the shout out. He is a Faculty Associate in the computer sciences department at the University of Wisconsin, Madison as well as a partner at SilhouetteFX and was the cofounder and president at both Profound Effects, Inc. and Elastic Reality.  I asked him if he would mind elaborating on morphing in SilhouetteFX.