With V-Ray’s complete set of lighting, shading, and award-winning rendering tools, you can bring any idea to life.

Built to handle it all

Built to handle your biggest projects, including scenes with massive amounts of geometry and thousands of lights.

Get the job done with ease

Artist-friendly tools and an intuitive interface help you work smarter, making it easy to get the job done.

V-Ray’s GPU and CPU rendering capabilities bring a speed boost to any production. With fast interactive rendering, you’ll see the changes to your scene rendered on the fly.

Harness the power of multiple computers to render high-resolution images with V-Ray’s distributed rendering. Or take your rendering to the cloud with direct access to Chaos Cloud.

V-Ray 5 is more than a renderer. Built-in compositing and interactive light mixing let you fine-tune and finish your renders in the V-Ray Frame Buffer without going to a separate app.

New in V-Ray 5.10, Chaos Cosmos is now also available as part of V-Ray for Cinema 4D.

V-Ray 5 brings a whole new rendering experience to Cinema 4D. With new smart tools and workflows, plus an intuitive interface, it’s faster and easier than ever.
V-Ray 5 for Cinema 4D goes beyond rendering with built-in compositing and interactive light mixing. 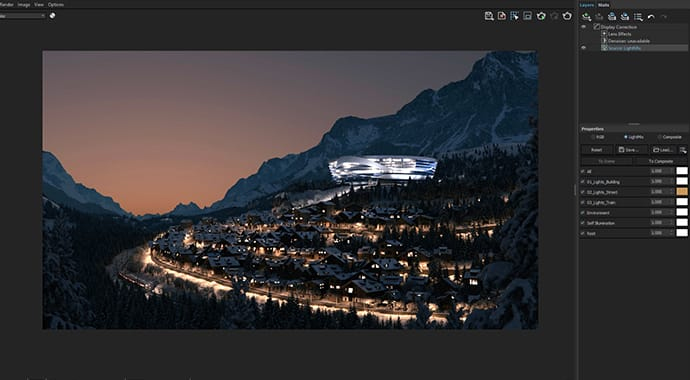 Now from a single render, you can create dozens of lighting scenarios. Change the color and intensity of lights instantly without having to render again. 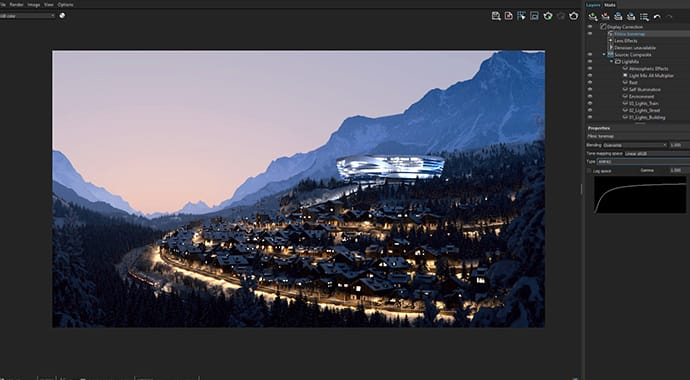 The new layer-based compositor allows you to combine render passes, set blending modes and adjust colors without going to a separate app.

Unleash the power of V-Ray

Faster rendering than ever before 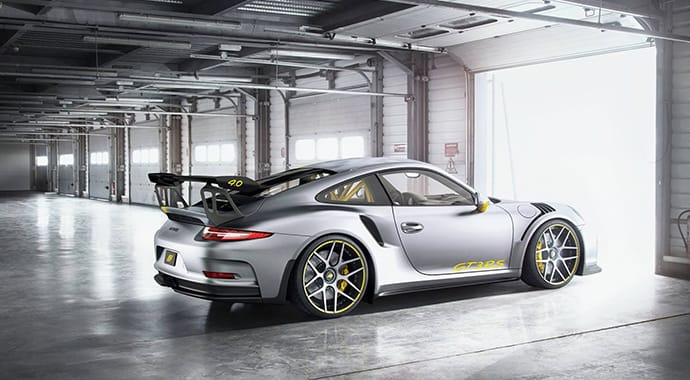 Take full advantage of your hardware. With V-Ray, you can render on GPUs, CPUs, or a combination of both. 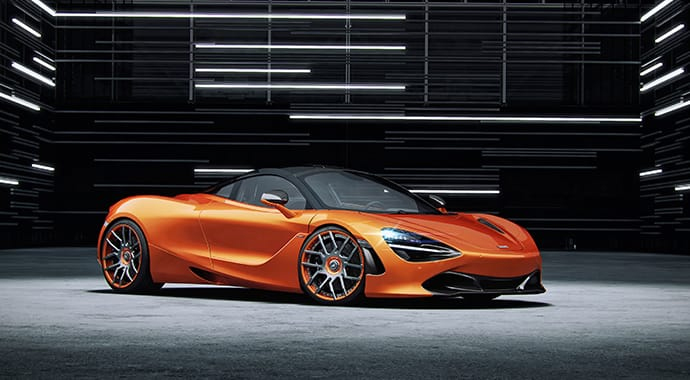 Get a powerful speed boost with the GPU-accelerated performance of V-Ray GPU. Now even faster with an NVIDIA RTX card.

Create the look you want without the wait. To explain, interactive rendering lets you see the changes to your scene rendered on the fly. 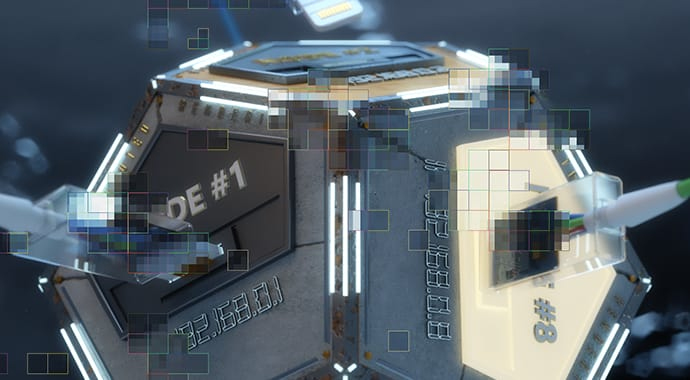 Easily harness the power of multiple machines working together to render images even faster. 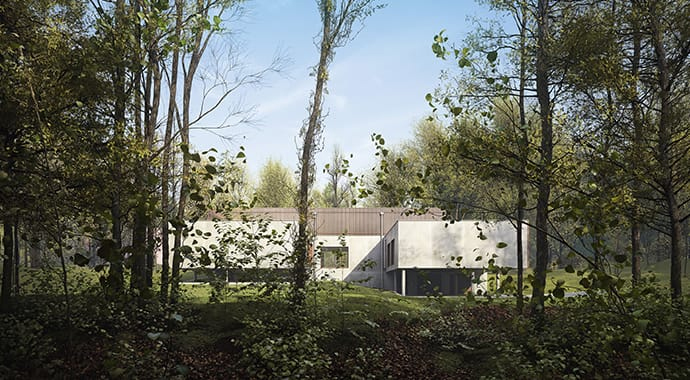 Render stills and animations alike in the cloud, at the push of a button. Not to mention, V-ray now comes with full support for Chaos Cloud, our cloud rendering service. 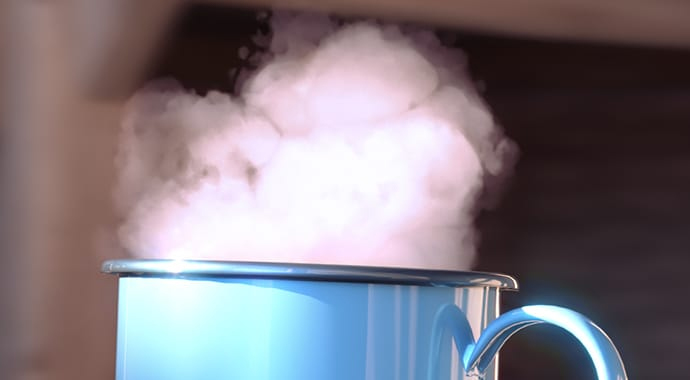 Let V-Ray do the work for you. 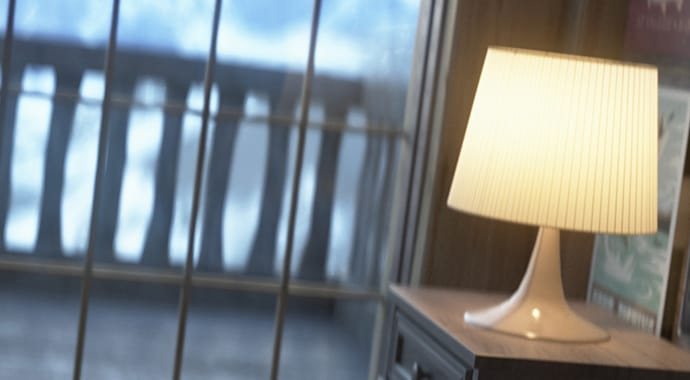 The V-Ray Camera can automatically set exposure and white balance for you, so you don’t have to do it manually. 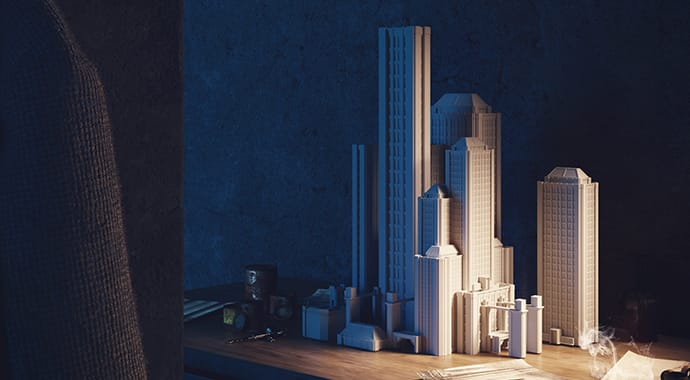 Expand your creative toolkit with all the right tools for the job. 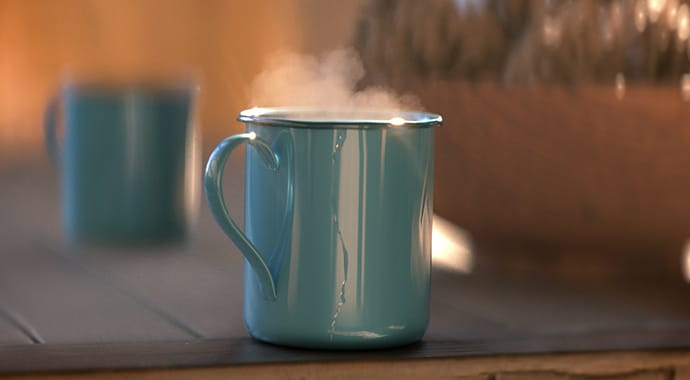 Easily create layered materials with reflective coatings directly in the V-Ray Material. It’s faster to set up and renders more quickly than a blend material. 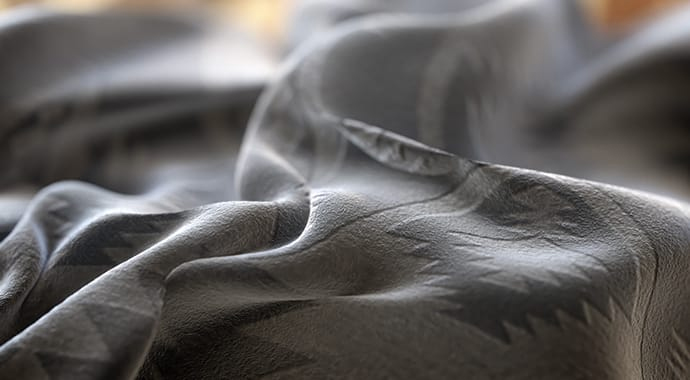 Easily create materials for fabrics like velvet, satin, and, of course, silk with the new Sheen layer added to the V-Ray Material. 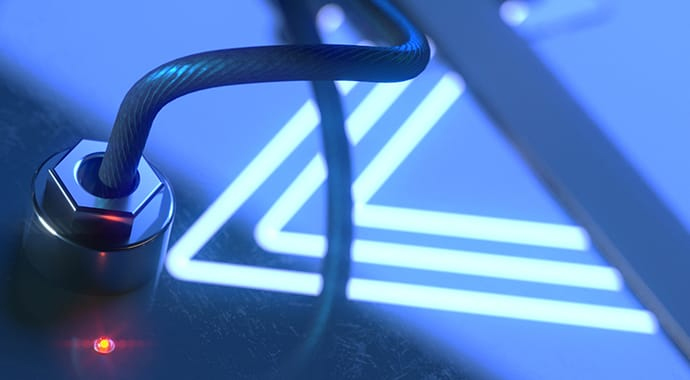 Metalness reflections are now supported directly by the V-Ray Material. In other words, you get full compatible with PBR workflows. 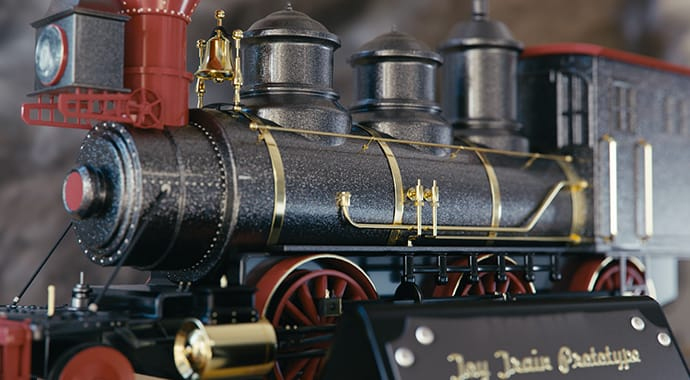 Take your automotive renders to the next level with a new car paint material. To emphasize, it includes more realistic flakes and uses less memory. 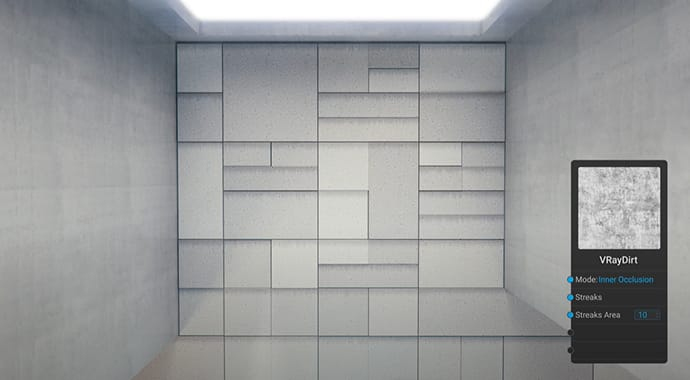 Give surfaces a weathered look. To explain, with the improved V-Ray Dirt texture, you can add dirt to cracks and crevices, create procedural streaks, or cover an entire surface. 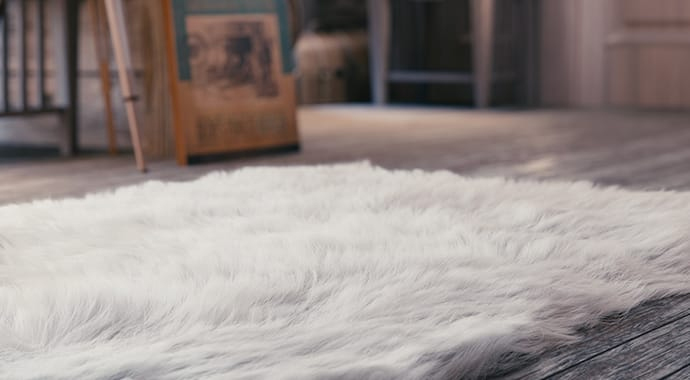 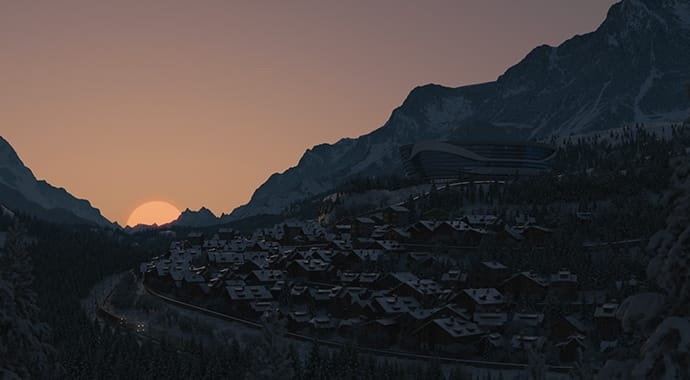 Capture the light of magic hour. The new Sun & Sky model is more accurate and looks better at sunrise and sunset. Markedly, even as the sun dips below the horizon. 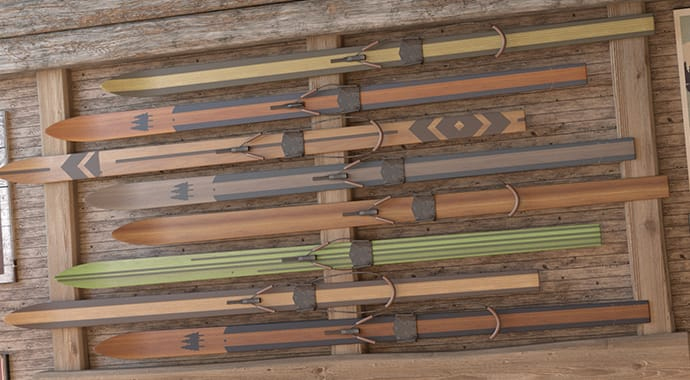 Add variety to your scenes by, for example, randomizing colors and textures with V-Ray MultiSub Texture. 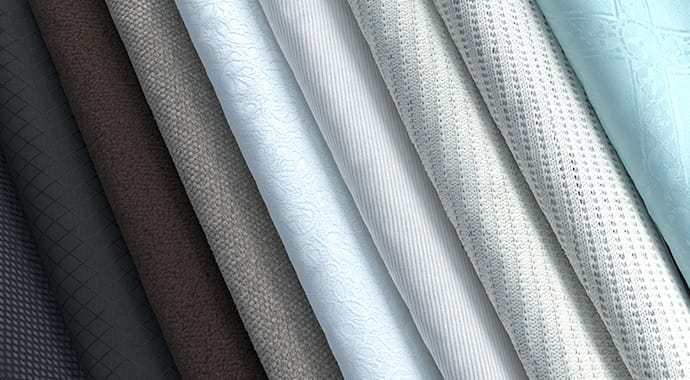 Get access to a library of over 1,000 unbelievably real materials. Significantly, it’s a great asset to help you with your V-Ray visualizations.

For the ultimate control in compositing, by all means, you can create your own render passes with Light Path Expressions.

This initial implementation of out-of-core rendering can help you render scenes that are larger than the memory of your GPU.

OpenCL with both AMD and Nvidia cards is not supported with V-Ray for Cinema 4D on macOS.

Vray does not need no introduction, if your reading this your know how often this render engine is used in big productions, and is known for its quality output. Vray for C4D fits the balance between its blistering speed, and flexibility for small studios thanks to the extra render node choices. Thanks to the hard working team Vray for C4D has been taken to a new level along side other platforms such as Max. You can go as deep as you wish into its settings, or simply use its finely tuned render presets to get set up rather fast. Like any professional renderer it has a learning curve if you wish to get into the deeper areas, but the user manual has improved a great deal since v1.9. I would like to see a pdf version as at times there can be delays online. The IPR (Interactive Preview Renderer) is very fast, and providing you know its current limitations such as SDS tags removing all material previews unless you apply it to a null, multiple material tags can not be used, and rigged characters can cause odd artefacts, your get very fast feedback with the IPR, in fact im often taken back how fast I can preview thousands upon thousands of hairs in real time along with the SSS options. The team behind this version of Vray are very hard working, and are quick to help, so any limitations as mentioned im sure will get addressed, however some limitations are native to Vray across all platforms in which rely on a good collaboration with Chaos Group, Vray core developer. Other things worth mentioning is due to the way C4D works, currently you wont get much of a preview in the view-port, but hope in due time the r18-r19 view port abilities will be used to better this area in future updates. Vray 3.4 is polished like never before for the C4D platform, and after a short while your be at home with it producing high quality stills, and animations. Its not the cheapest solution out there up front, but you get them extra render nodes that certain other reneder engines dont, hence Vray fits the bill for freelancers, small studios to large production studios. With Vrays fast speeds, high quality realistic lighting and materials its hard not to recommend Vray for C4D v3.4. Id like to see Vray for C4D community gel more, and interact better as often is the case that troubleshooting works best with a good community such as found on C4D Cafe.

If you missed the live webinar, no worries, you can find out about Chaos V-Ray 5 for Cinema 4D's exciting new features and workflow changes with the webinar replay right here.  Learn about the new V-Ray Frame Buffer, learn how to add more variety to your scenes through new material layers, enhance the magic hour with the refreshed Sun and Sky system, go beyond rendering with V-Ray’s built-in interactive post-processing — and more!

Learn to light an interior scene with these lighting and rendering techniques. Create rich and realistic renders using V-Ray for Cinema 4D.

Master lighting in VRAYforC4D with this free lighting tutorial series from MographPlus.  This 8 part series lasts just under 2 hours and will teach you the secrets, tips and techniques for interior and exterior lighting, using physical sun & sky and much more.

A Beginners Guide to VRAYforC4D

Learn the basics of using VRAYforC4D with this short introductory tutorial.

Want to make incredible renders with V-Rayfor4D? Mograph+ explains how to do it!

Rendering a Sci-fi Gun and Scene With VrayForC4D

Burning Question: How do I Make Grass in CINEMA 4D?

The Hair Module makes lovely grass in CINEMA 4D and here are some resources to help you make a lush lawn or field of waving grains. Includes lots of tutorials and freebies!

This tutorial from Mograph+ talks about multipass rendering in VrayForC4d using its powerful multipass manager.

Ben Watts has a new tutorial that shows how to make a chiseled bevel in CINEMA 4D on a complex letter. He covers a quick VRAY render setup too.