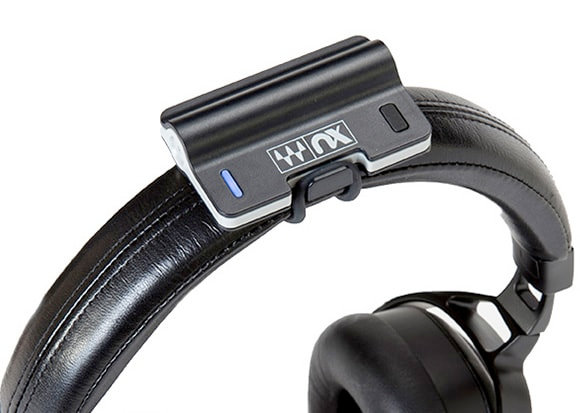 It delivers the same acoustic response you would be hearing in the sweet spot of the Studio 3 control room—with the same stereo (or surround) image, and the same well-balanced sustain across the entire frequency spectrum.

Now you can mix and produce in the same environment where mixing and production sessions for Pink Floyd, The Beatles, Amy Winehouse, Radiohead, Kanye West, Frank Ocean, and many more were crafted and perfected.

The plugin allows you to choose between the three sets of high-end speakers at Studio 3 (near-field, mid-field, far-field), as well as the studio’s full 7.1 or 5.1 surround speaker setup. It also features headphone EQ calibration for selected popular headphone models.

This combo also includes the Nx Head Tracker, which tracks your head movements with precision, in order to enhance the immersive experience of being inside the Abbey Road Studio 3 control room.

Use Abbey Road Studio 3, complete with head tracking, to get a reliable representation of how your headphone mixes and productions will sound on speakers. Whether you are away from your acoustically treated mix room, or simply don’t have one, you can now mix on headphones and consistently predict how your mixes will sound on other systems.

Immersive audio experiences are found in movies, computer games, VR/360° video, YouTube, Facebook 360, and more. Find out what it's all about!

Waves product manager Yoni Zlotkin walks you through the Waves Abbey Road Studio 3 plugin. See how you can mix and produce with the perfect acoustics of the Studio 3 control room—inside your headphones.