The days of difficult to manage 3D lighting are gone! Zaxwerks 3D ProAnimator has invented new technology to make advanced lighting design and animation capabilities much easier than before. Using the same procedural animation engine that 3D ProAnimator has become famous for, you can now create moving, flowing lighting sequences, coordinating the motion, brightness and color of hundreds of lights at the same time. ProAnimator comes in two forms: as a standalone application and as an After Effects plug-in.

CHANGES ARE NO SWEAT

The fourth big new feature in 3D ProAnimator 8 creates big things out of small ones. Object distribution has always been a part of 3D ProAnimator but in version 8 we've made it much more flexible and powerful. We've added many new distribution styles which make it easy to create environments, backgrounds, and objects made up of other objects.

Simple distributions are like arranging objects into rows, rings or grids. 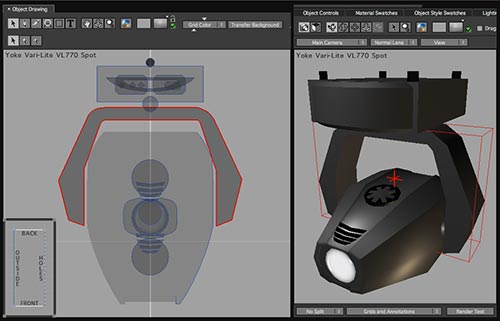 What are lighting effects without lens flares? In 3D ProAnimator 8 when you point a light at the camera you'll see lens flares.  The program comes with over 50 gorgeous flare styles and an editor to create your own. 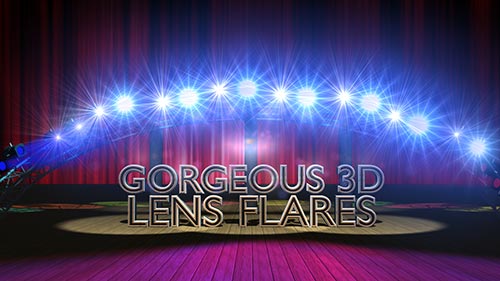 3D ProAnimator 8, which has its own modeling, animation system, and large shader library, is now available as either a self-standing motion graphics application, or as an After Effects plug-in, and is only $399 making it an unbeatable value for someone adding 3D motion graphics to their tool set.

Many Lights – One Track

Typical 3D programs put each light on its own track.  This makes it very inefficient when adjusting multiple lights and very time-consuming to create animations with coordinated motions.  Because of this, lighting in 3D motion graphics tends to be plain and uninspired.  Something not at all appropriate for the dynamic motion graphics expected by today's sophisticated audiences. Zaxwerks 3D ProAnimator 8, for the first time, puts dynamic lighting into the hands of the average person.  A single track can handle many lights, and you have control over those lights in ways that produce flowing, coordinated motion with little effort.

Creating animations of multiple lights moving in the sequence is very difficult.  ProAnimator, using it's advanced procedural animation engine, lets you create amazing moving light animations without needing to set keyframes and without even having to render the animation to see what you're getting. You can create blinking lights, color change animations, light chase sequences, and movement animation such as searchlight motion or high impact dance club motion. 3D ProAnimator's automatic light orientation can make lights follow objects, create fanned arrays, or point in random directions, at your command.
All of this is done without setting a single keyframe, yet totally under your control.

Seeing the beams of light can make your animation look more exciting and real.  3D ProAnimator 8 does just that! You can make beams with hot centers, fat washes, patchy atmosphere, and streaky smoke.  Switching between the looks is just a click.  A dozen attractive looks come with the program and you can always modify them or create your own.

In the real world light fixtures are hung from pipes and truss.  3D ProAnimator creates the models for your trusswork automatically.  You choose the layout, straight, circular or rectangular, the arc and size of the truss, and ProAnimator will create the trusswork, hanging the lights for you.  As with all things Zaxwerks you can change any part of it at any time and the program will rebuild and make adjustments so you can keep working at top speed.

In the real world light bulbs are held in lighting fixtures.  3D ProAnimator creates the fixtures for you too.  Choose from a variety of industry-standard lighting fixtures such as Altmans, Vari-Lites and Martin Macs.  ProAnimator will insert them into your 3D scene, attach them to the trusswork and even animate them for you.  Building elaborate lighting rigs has never been so fun and easy!

Once your lights are set up you can save them as Lighting Rigs.  Rigs are multiple lighting tracks saved as a single swatch or thumbnail image. A rig contains everything it takes to recreate an entire lighting animation: position, number of lights, trusswork, color, right down to the animations and the actions. A rig can be added to any project by simply clicking on the picture. Lighting Rigs are very powerful ways to reuse animation or add professionally designed lighting animations to your project giving you high-quality results while under deadline pressures.

One of the most dramatic parts of motion graphics these days is the lens flares.  All lights in ProAnimator 8 can create flares when pointed at the camera.  These are true 3D lens flares so they automatically become smaller as the light goes into the distance.  They also fade out if other objects move in front of them, and bloom as they go out of frame. The program comes with 50 professionally designed flares.  You can use the flare editor to customize the presets or create your own.

Another time-consuming part of production is creating the materials that color the surfaces of your objects.  ProAnimator 8 includes 100 materials that you can drag and drop onto your objects for instant gratification.  All materials include specular maps and most have bump maps for professional and realistic quality.

Lighting design is a difficult field.  Most 3D animators don't even try it because doing lighting in 3D is a major pain.  3D ProAnimator 8 has a long list of innovative new features that put professional lighting design and animation into your hands.  It makes it accessible.  It makes it real.  It makes it something that you can use to up your game.

Standalone Version.  It does not run as a plug-in.

Note: Zaxwerks allows two installations (for instance, a Desktop and Laptop), provided only one is activated at a time.

Learn how to create wireframe materials with Zaxwerks 3D Invigorator Pro and ProAnimator.

Alex Dow of Zaxwerks on the RFShow

Alex Dow of Zaxwerks, the ProAnimator Guru, lets his talent run rampant on for RFShow.TV! Watch Alex display the power and simplicity of ProAnimator 8!

From the creative minds at Zaxwerks comes a wonderful tutorial showing how easy it is to create your own custom bevels in 3D ProAnimator and 3D Invigorator Pro.  This tutorial teaches you how to utilize the Profile Editor to create and edit bevels. You will also learn how to customize 3D Text and vector shapes.