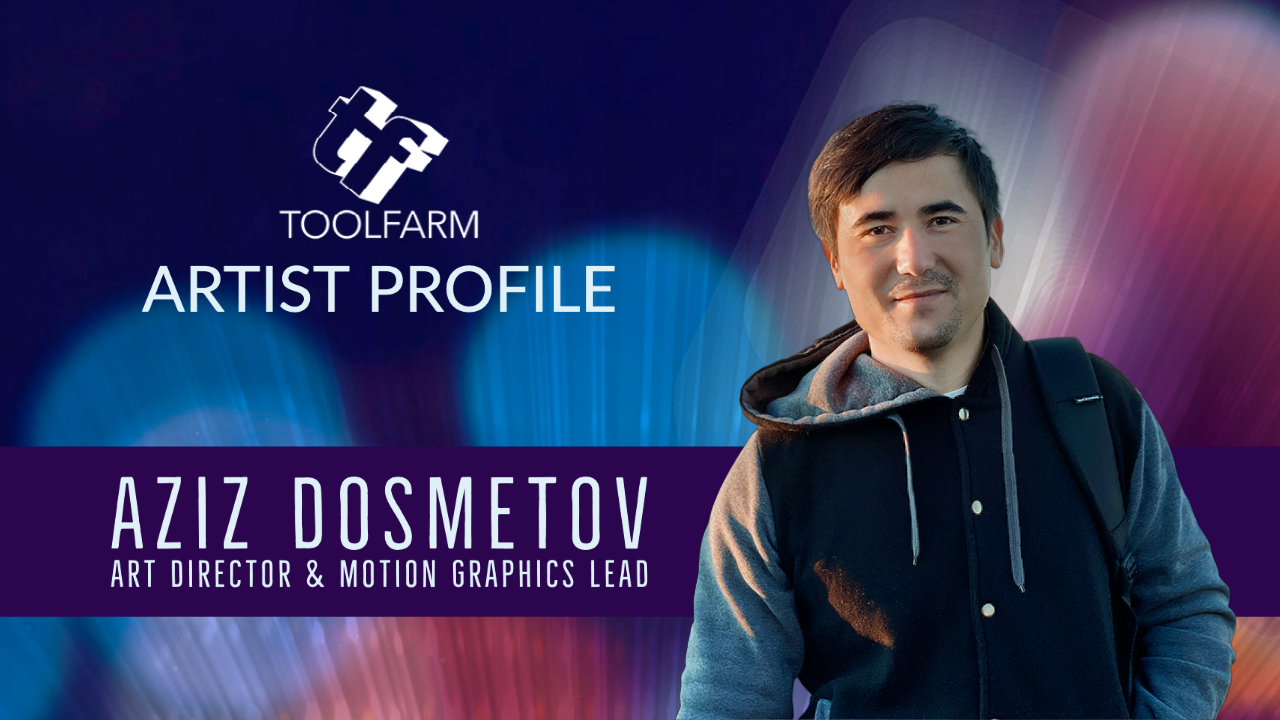 Aziz Dosmetov won a 6-month license of V-Ray for Cinema 4D during our recent webinar. We took a look at his work, and we loved it. We thought that you all would enjoy seeing it so we put together this profile. He was kind enough to answer a few questions, as well.

Aziz is a Los Angeles-based Art Director and Motion Graphics Lead and does a lot of freelance work for television and film. Aziz worked on many fantastic main titles of popular shows, working as a freelancer with teams at MPC, Prologue, Method Studios, and others.

Below, we’re featuring a few that show some of his recent work and a nice variety of projects. Be sure to check out Aziz’s Behance page and his website for more great work.

After checking out his work, scroll down for a brief interview with Aziz.

Aziz worked with Elastic as an animator on the whimsical Main Title Sequence for Amazing Stories. I loved the 1985 Steven Spielberg show, and now Apple has created a new original series based on the original. See some still frames on his blog.

I was a big fan of this show from Amazon, starring Al Pacino as a Nazi Hunter in New York in the mid-1970s. Aziz worked as an animator on the Main Title Sequence with Elastic. The title sequence presents the characters as a 3D-animated chess game.

The American Horror Story opening sequences have always been visually chilling. Aziz’s role on the teaser FX’s American Horror Story season 8 was to design visual and reference frames for digital production, including the heart, the missile, explosion, city and roads, and the mushroom cloud. In addition, he produced some episodic frames.

A Few Questions for Aziz

Toolfarm: If I understand correctly, you’re a freelancer with your own studio and you’ve been working with MPC, Prologue, Method Studios, and other studios as a motion graphics lead in recent years?

Aziz: Yes, I mostly freelance for studios and sometimes work with clients and agencies directly. Either way, I get to collaborate with other artists with different skill sets, thus learn from them.

TF: What are your favorite pieces that you’ve worked on? What was it that you enjoyed about working on those pieces? What was the most challenging piece and why? Any details you can share about any of the projects that I can share?

Aziz: I may have to write pages to answer this question because most of the projects I worked on were interesting and had their own challenges. Generally speaking, we overcome those challenges as a team and put our best effort at a reasonable time given. And I enjoy the heck out of that process.

TF: Can you mention the main toolset that you use? What do you like about these tools?

Aziz: The toolset changes per project and sometimes per studio. For design and motion graphics work, Adobe and Maxon products come very handy while Autodesk and SideFX products are great for film and visual effects work. Including many other extensive plugins that we have today. Some people don’t but I really like the fact that you can rent most of the software now for as long as you need it. It’s great for flexibility in order to switch gears between projects and it allows me to stay cutting edge with the latest features.

TF:  Have you learned any lessons during your career that have helped you be more successful?

Aziz: For the workflow tips, I believe you gain this through experience. As a guidance tip, I would say collaborate more with other artists, you will constantly learn something new and it will break through the habits of creating similar things every day.

In conclusion, find things that you can truly relate to and stay relevant whether it’s traveling, sports, or outdoor activities. Anything really that drives your imagination can help you with your personal projects. These things had helped me to climb up the ladder a bit more, which some call a success.