Andrew McMurry seems to be a wunderkind. He’s the Director/VFX Artist for Andrew M Films and has a very successful YouTube Channel with his film shorts. You may have seen Mario vs. Minecraft or LEGO Invasion and they are not only fun to watch, but technically complex. Michele Yamazaki from Toolfarm talks to Andrew about his film shorts. 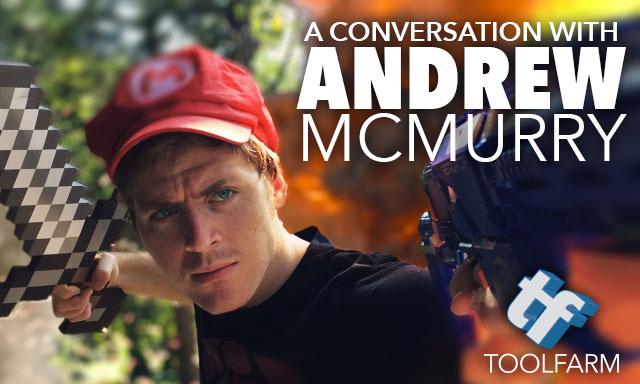 A couple of weeks ago someone on Facebook shared Toy Wars, which I thought was so clever and fun. It really reminded me of Action Movie Kid from Daniel Hashimoto, a Dreamworks animator and cool dad, who been doing an ongoing series of special effects vignettes with his toddler. Both Toy Wars and Action Movie Kid are really creative and clever, and both involve fathers, but they are very different in scope.

I watched several more film shorts from Andrew McMurry, the director/VFX artist behind Toy Wars, and I learned he had quite a following… and with good reason. They are fantastic! My technical side can appreciate all of the work that goes into creating the 3D, motion tracking elements, and compositing it all together. The kid in me loves the silly humor and imagination. After seeing LEGO Invasion, I contacted Andrew right away for an interview and he was kind enough to oblige.

Michele Yamazaki: Andrew, you must have had a very active imagination as a child! Did you always want to make movies?

Andrew McMurry: I was home schooled for a majority of my life, so I had a ton of free time to do whatever I wanted. In my case, it was doing creative things like drawing, animating, etc. When I was around 8 or so, my parents got me a cheap little camera from a pawn shop, and from then on, it’s just a big blur. I got a copy of After Effects when I was about 15 and spent several hours a day watching tutorials to figure it all out. I never went to any type of film school at all – just experimented with the software a ton. So, in short, I’ve always been the creative type, but never really knew exactly what I wanted to do. At least not until I got a camera and fell in love with making videos.

MY: Where do you find inspiration? Video games and action movies are pretty obvious, but there has to be other sources. Do you find yourself watching something and suddenly coming up with an idea for a film?

AM: Weirdly enough, I don’t get much inspiration from movies. I get ideas for elements from them, like camera motions and all that. Most of my plot ideas come from a simple “Well what if this happened” and I expand from that with creative scenarios. I love watching YouTube videos similar to mine to drive my inspiration a bit, particularly channels like CorridorDigital, timtimfed, SoKrispyMedia, and more.

Video games are a big driving force of the channel because they’re popular and also have a ton of room for imaginative scenarios. And I just love video games. A lot.

MY: Can you talk a bit about your pre-viz? Storyboards, shot lists, and so on…

AM: Usually, I’ll just have one storyboard and that’s it. I just draw out how I want my shots to look and all that. 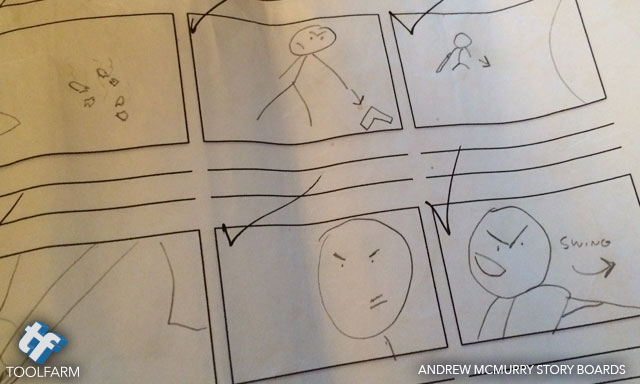 MY: In the credits of LEGO Invasion and Mario vs. Minecraft, you’re listed as Director/VFX. I am guessing that your credits would be much longer if everything you did on the film were listed!

AM: Hahah, yes, I normally do much more than directing and VFX. Usually I direct, shoot, sometimes act, edit, and do VFX. I’ve been trying to find other people to fill some of those roles, though. It can be stressful doing it all myself.

MY: Yeah, I’ll bet! As the cinematographer, what sort of gear do you typically use? Have you learned any good tricks?

AM: I used the Blackmagic Cinema Camera for a good while. Just jumped back to good old DSLR, though. I like to keep it simple. For lighting, sometimes I’ll bring a reflector and never use it.

MY: Ha, good advice. I’m watching Mario vs. Minecraft right now and I can see that you have some great editing, lots of motion tracking and match moving, 3D modeling and compositing, etc. What types of software do you use in post production?

MY: It looks like you do the majority of the work yourself. Without knowing anything about you, I am assuming that you probably work a post-production job and make these films in your spare time. With the amount of work going into the films, it must take all of your spare time!

AM: No other job than freelance editing for other YouTubers! It takes up a lot of my time. It can take from 2 weeks to several months to make a video. LEGO Invasion took about 6 months to complete. Eeeek.

MY: Wow, that’s a lot of time, but your the work really shows.  In the credits, you list Matthew McMurry for music. Is he your brother?

AM: Matthew and I are like two peas in a pod. We’re cousins, but basically brothers. We’ve been making videos since we’ve known each other (roughly 14 years). He helps with the creative process and does the sound/music. He’s pretty awesome at it so I rarely have to mess with it!

MY: How about actors. How do you find them?

AM: For a good while, I just used my brothers Seth and Nathan to act in my videos. Easy enough! Seth is still a big part of the channel (Mario, Rust, GTA Cop, Toy Wars, etc.). Typically, if I need actors these days, I’ll just post a status update on Facebook and people will offer to help.

Rust in a Nutshell

MY: Are you earning income from your films on YouTube? Is publishing film shorts on YouTube is a viable way for filmmakers to earn a living?

AM: Yeah! YouTube is a great job. I love it, and am lucky enough to call it an actual job. It supports me enough to fund future projects and have some extra change in my pocket. I don’t really host my videos on other websites. Only YouTube!

MY: Okay, time for a hard hitting question about licensing. In a recent video interview with Richard Dunn, The Lonely Airport Guy, he talked about how he didn’t have the rights to use Celine Dion’s song All by Myself, but luckily it all worked out with Sony Records. He is not able to collect any income though from YouTube ads, which, after 22 million views, would have been a nice way to help with his daughter’s college fund.

In your videos, you use characters which are licensed to Nintendo, LEGO and other companies. I know they are not exactly the same – your Mario is a human, after all –  but is there any concerns about copyright infringement?

AM: To be honest, I don’t know much about it. I’m signed to a network that allows me to get away with a lot of that. I couldn’t do what I do if I was a regular YouTube partner. I accidentally used a remix of the Mario theme in my most popular video “Real Life Super Mario: Updated!” so I don’t get any income from that video, unfortunately.

MY: Interesting. So, do you have anything currently in the pipeline?

AM: I think we may continue this VS. style of videos a bit. People seem to enjoy it enough! We’re thinking about a Half-Life/Portal themed VS. video. Should be fun! I’m always trying to do something a bit different with each video, but also staying true to the type of content that people subscribed for. I don’t want to stray from my roots all of the sudden and freak people out.

MY: Well, I look forward to your next project. Thanks for taking the time to answer my questions, Andrew. You’ve got a great thing going and I wish you success!