We had a chance to catch up with Jeff Desom and talk a bit about his clever timelapse of Alfred Hitchcock’s “Rear Window”, discuss his creative process and current work. Vimeo Awards 2012 Winner/ “Remix” Cateogry ; Winner of Prix Ars Electronica Golden Nica for Computer Animation / Film / VFX.

We had a chance to catch up with Jeff Desom and talk a bit about his clever timelapse of Alfred Hitchcock's “Rear Window”, discuss his creative process and current work.

“I dissected all of Hitchcock's Rear Window and stiched it back together in After Effects. I stabilized all the shots with camera movement in them. Since everything was filmed from pretty much the same angle I was able to match them into a single panoramic view of the entire backyard without any greater distortions. The order of events stays true to the movie's plot.”

TF: What inspired you to create a time-lapse from rear window?

JD: The time-lapse is based on my 20 minute real-time version which was designed as a large scale projection. It was a commission for which I was given a blank canvas and only a few technical constraints: The resolution had to fill a fixed width of three horizontally aligned projectors and it had to be loop-able. Coming from a background in production design, I've always had a strong interest in architectural concept drawings and miniature models of sets. My initial idea was to create a panorama shot of an urban environment with a lot of little windows displaying scenes from daily life. I just wasn't sure what technique to use. Of course, Hitchcock's Rear Window immediately sprang to mind, but only as an inspiration. I sat down and re-watched it to remember what happened in the famous courtyard. That's when it struck me that all of these shots were strictly taken from one and the same position. Everything was already there, some assembly required. I later found out that the original short story 'It had to be Murder' is also called 'Murder from a fixed Viewpoint.' If Hitchcock hadn't taken the title so literal in his mise-en-scène, this sort of reconstruction would have never been possible. 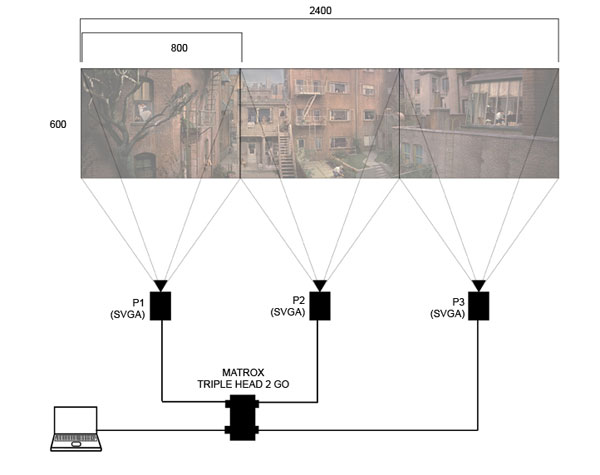 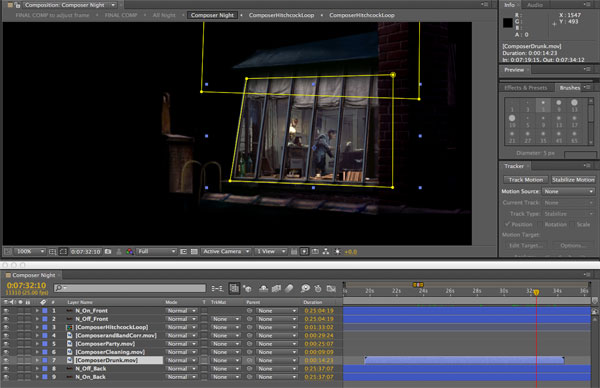 TF: What was your process for analyzing the movie and creating comp segments? How long did it take you?

JD: I used Photoshop to stitch a panorama of the courtyard together using only screenshots. The start of the time-lapse video demonstrates this in a simplified manner. It doesn't show how I compensated for lens distortion and extreme changes in color temperature. That was a major challenge. Since the original camera had scanned pretty much the entire set for most parts of the day, I was able to create such a panorama for noon, twilight and midnight. I then isolated every single POV shot from the original to have them as separate clips. In After Effects, I stabilized, color corrected and scaled those snippets into the appropriate window at the appropriate time of the original's plot. I mapped out a timeline for every sub-plot not to loose the overview. Take a sequence of the following shots for example: Grace Kelly climbs up the ladder followed by a shot of Jimmy Stewart watching, then another shot with the continuation of Grace Kelly's action. I would cut Jimmy out and stitch the stabilized Grace Kelly shots together as seamlessly as possible. At times I was surprised to see that only a few frames had been cut from the original shot. You could tell Hitchcock hadn't used more than one take for most of it. I didn't count the comps, layers and hours that went into it, but they were many.

TF: How does dissecting a movie like this change your experience of watching the full movie?

JD: I was already a great admirer of Hitchcock, but working close range with his material has been the most humbling experience. It was very much like reverse editing the film before I stitched it back together. One can truly recognize his mastery and precision of work down to last frame. I felt obliged to push myself to the best of my abilities to do his masterpiece any justice. Even the pigeons on the roof got the same treatment like every other character in the film. I haven't watched the original since, but I'm probably more fed up with my own remix of it. I owe a great deal to Rear Window. It will always have a special place on my dvd shelf.

TF: Your video was picked up very quickly by several design news outlets. Did you have any idea that it would become so popular?

After the 20 minute installation piece had only been screened on a couple of occasions, it was gathering dust on my hard drive. Because a lot of energy had gone into it unnoticed, I decided to make the time-lapse edition to illustrate my working process and promote the large scale projection along the way. When I played that Hugo Winterhalter rendition of Brahms to it, I felt that I had to stick to that playfulness. Initially, I refrained from using the tilt-shift effect because it has been used to the point of exhaustion. But eventually I couldn't help it. I knew it was a combination of some popular elements, but I would never have expected this sort of resonance. 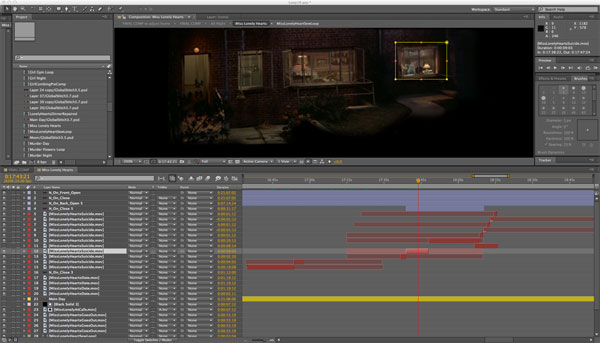 TF: About yourself- Can you tell us a little about any upcoming projects that you are excited to be working on? What types of projects do you enjoy working on the most? Any influences (film, video, mograph, design or art) you'd like to mention?

JD: At the moment I'm in post with a new music video. It's the third one in a row for Hauschka. He's an experimental pianist from Germany and both our worlds happen to correlate in a good way. We also have a live show called Ghost Piano which combines projection mapping and old-school optical trickery.

It's something very different from my short films and music videos, it really has to be seen live.
I always look for a challenge in the next project, especially those of a technical nature. The pace at which digital technology advances is quite mind boggling, I have to admit, it does intimidate me at times. I find it reassuring when I see a vintage piece of technology or art that stood the test of time. Like the pepper's ghost illusion. It's actually quite simple to achieve, but when you stand in front of it, you'd think you're on a holodeck. The combination of the old and the new has proven to be quite a successful formula for myself. I like to explore both ways.