For Midweek Motivations, we’re featuring some fun, short examples of work using Rowbyte Plexus from artists on Vimeo. This will give you a great idea of all of the cool things you can create with Plexus. First, a note about the sale happening this week. 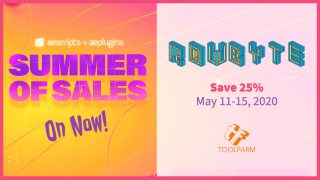 Save 25% on Rowbyte Plugins during Summer of Sales

Save 25% on Rowbyte plugins during the Summer of Sales, including Plexus for Adobe After Effects, Aura, Data Glitch, and the TV Distortion Bundle.

Dave Mason did some commercial work for Corelis. This is a VFX breakdown that includes his work in After Effects with plugins from Red Giant, Video Copilot Element 3D, and of course, Plexus.

Rafael Calleja was commissioned to work on this design for the Daimler Supplier Awards. He used After Effects, Plexus, Red Giant Trapcode Particular and Trapcode Form. His final resolution was 6K. It’s a cool piece, so click below to watch it on Vimeo.

This animation from Jan Gryc is the final lookdev for his animation for Miral Developers. The electron was created in After Effects with the help of Plexus and Red Giant Trapcode Form.

MFTKR created the walls of the heart forming using Plexus.