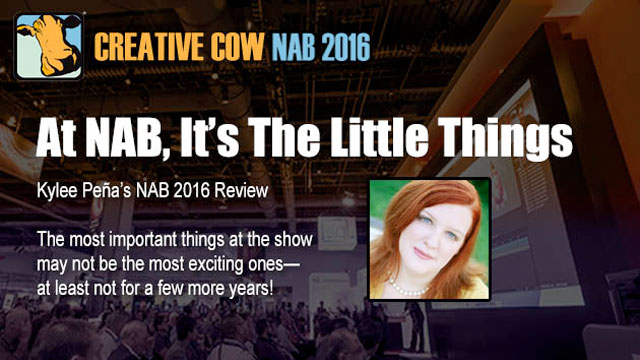 Kylee Peña, of Creative Cow, gives her thoughts on what were the big (or not so big) takeaways at NAB this year.  Read an excerpt here, then follow the link to her full article.

The “little things” are what affect the acquisition-to-delivery workflow right now — if not practically and immediately, then conceptually. My job deals with facilitating and supervising the workflow from camera to finishing for TV shows, as painlessly as possible. So my NAB was spent focused on acquisition formats, on set color tools, displays, and software support for all of these things in post. These are things that are no less important than anything else to the right people, but don’t attract the crowds and blogs of Big Deal announcements. They’re quicker to hit the market or “updates” tab of your software. Or they fundamentally change an aspect of your working life in a mundane but important way. Or they’re just not as much fun to demo or talk about.


THE MOST IMPORTANT NAB 2016 STORY MAY NOT BE IMPORTANT TO YOU UNTIL 2019
It’s fun and interesting to look at the broad concepts that may be a predictor of NABs to come to see how some big ideas become small pain points that need solving. Walking around SAM’s booth (the re-branded Quantel and Snell) has become a post production crystal ball for me each year. A relative few utilize Quantel Rio and its 8K capabilities on a day to day basis compared to the sea of people on the exhibit hall floor of the South Hall. Many of those people still dismiss 8K or beyond as “ridiculous” or “unnecessary” — same as they did with 4K, same with HD. It’s the same story, year after year.

Three years ago, I was writing about real time 4K editing and broadcast from companies like Quantel and Grass Valley and even then, it was old news — most of these products were originally released in 2007. Dealing with 4K and UHD has moved from a narrow speciality to a mainstream NAB hot topic to a practical problem that needs to be solved in small but important ways, especially for 4K delivery.

I spoke briefly with SAM’s Director of Creative Services Danny Peters about the dismissal of 8K by some. To paraphrase and over-simplify one aspect, this dismissal is a lack of understanding of what 8K is giving you: not just more pixels, but better quality pixels that yield an emotional response, even if you can’t tell why.

The story shifts from “what’s that” to “I don’t need that” to “how do I make that work” and suddenly we’re at an NAB where the people are searching for software and hardware capable of dealing with these changes in their specific workflow.

I'm a post production professional with experience in broadcast television, commercial, corporate, independent film, web, and other things people put videos on.  I particularly enjoy working with young people who are just getting started in the industry. Education in post is a high priority for me.  Besides writing for Creative COW, I'm the co-host of a post podcast about confessing your mistakes and what you've learned from them called The Track Matte Moment.

Kylee is also one of the tip contributors for our Toolfarm NAB survival guide video.