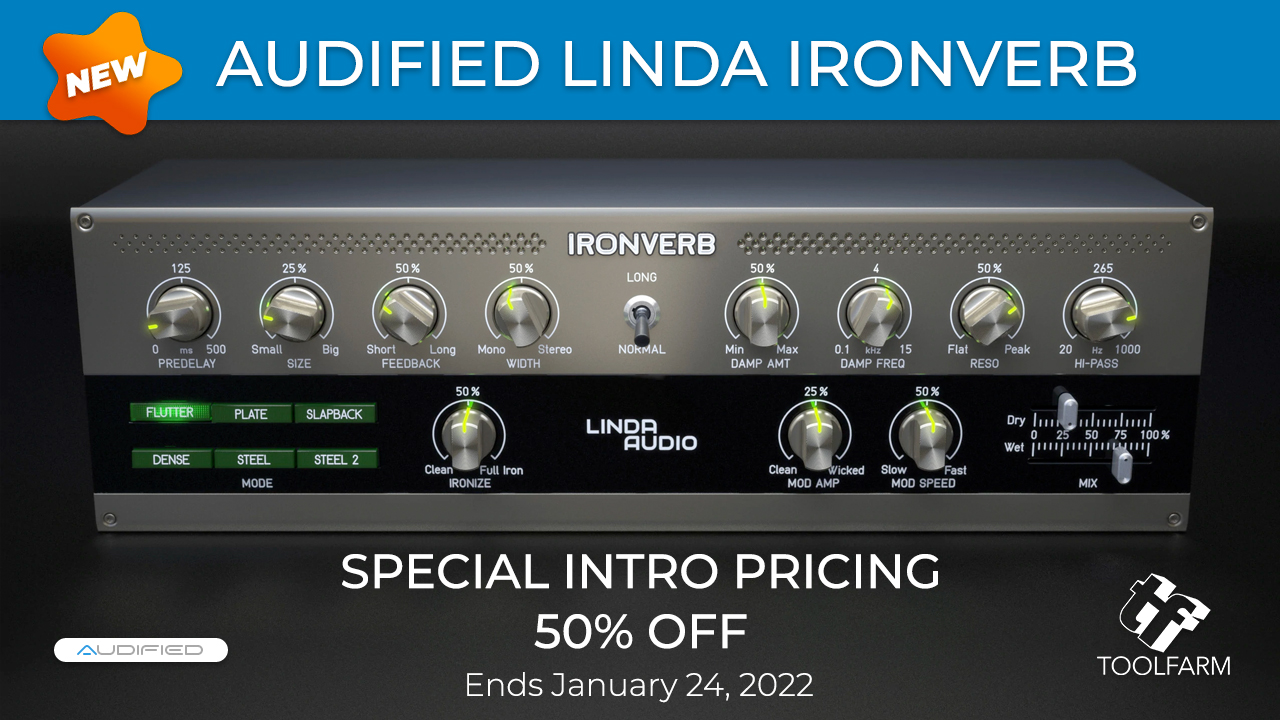 Audified has collaborated once again with mastering/mixing engineer, musician, and programmer Martin Linda to bring you IronVerb, a Universal creative reverb.  Get it now and save 50% with special introductory pricing, thru January 24, 2022. 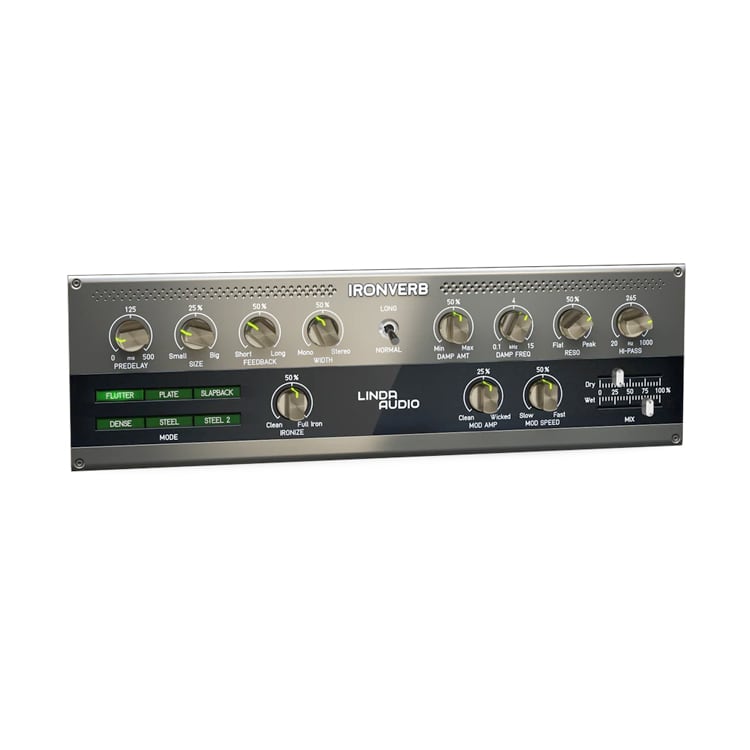 IronVerb is a classic algorithmic reverb, perfect for all reverb needs: from subtle, short reverb to huge atmospheric, ethereal, and ambient textures with long decay. The main feature, the Ironize modulation, adds an iron-like sound to reverb tails. Featuring 6 different modes, a multitude of parameters such as predelay, feedback, and damping, you can tweak it for your desires and needs. The modulation section allows mixing vibrato/chorus into the reverb. Its use is anywhere, from drums, vocals, and guitars, to simulating large spaces such as halls or cathedrals.

BRNO, CZECH REPUBLIC: following in the critically acclaimed footsteps of Linda RockStack, representing the inaugural release in its namesake Audified Wings plug-in portfolio as a unique virtual amp designed to meet the specific needs of modern-day guitarists, software application, software effect, and hardware processor developer Audified is proud to announce availability of Linda IronVerb — instigating a second creative collaboration with experienced mastering/mixing engineer, musician, and programmer Martin Linda’s namesake Linda Audio as a classic algorithmic reverb plug-in with modern features and a unique twist in its IRONIZE function’s ability to add a metallic-like touch to the resulting reverb effect — as of January 10…

From subtle, short reverbs to huge, ethereal, atmospheric, and ambient textures with long decay at their spacious-sounding core, Linda IronVerb is a classic algorithmic reverb plug-in with modern features and a unique twist. Since standing out from the sound of the plug-in crowd is always a bonus in today’s somewhat swamped marketplace, Linda IronVerb is blessed with a unique-sounding feature from which it takes its notable name — namely, IRONIZE modulation. By bringing a smooth or glossy iron-like character to the production proceedings, it is perfect for pads, atmospheric sounds, and ambient soundscapes. Simply tweaking the IRONIZE knob from Clean to Full Iron allows anyone to free themselves from more traditional reverb sounds in favour of something that is much more unique sounding. Speaking of modulation — and equally simple and effective in implementation, MOD AMP controls the amount of applied chorus/vibrato effect to the reverb sound, while MOD SPEED controls the speed of the applied modulation. Musically speaking, adding modulation to the reverb sound can quickly add some ‘synthy’ vibe to prevent the resulting reverb from sounding sterile and stale.

It is, of course, fair to say that there is already an abundance of other reverb plug-ins out there that offer an abundance of overwhelming controls and features for crafting detailed reverb sounds, yet achieving those desired sounds can often take time — not least learning all the parameters involved. It is for this reason, therefore, that Linda IronVerb’s namesake creator crafted it to draw out the most pleasing sounding reverbs possible with a perfect blend of really responsive controls; users can consequently tweak to their liking with minimum fuss. Intuitive in the way that it is laid out, Linda IronVerb sounds musical while gently coaxing creativity — just the way Martin Linda likes it. Indeed, it features six different modes with original algorithms for various reverb colours and vibe, including FLUTTER, with periodic warbling effect; PLATE, based on classic vintage plates used in recording studios; SLAPBACK, with a slower attack resulting in a slapback echo-like sound; DENSE, with its narrow space and high density resulting in a sharp sound; STEEL, simulating a steel
barrel; and STEEL 2, bringing a different vibe to the STEEL barrel sound with a slower attack.

Additional creative control over those pleasing-sounding reverbs comes courtesy of PREDELAY, which allows for delaying the time — up to 500ms — before first reflections start to occur; SIZE, which allows for shaping — Small to Big — how the reverb sounds; and FEEDBACK, for controlling the amount and time of reflections from Short, echo-like reflections to Long decay tails — acting as a decay control, in other words; while WIDTH allows for expanding the sound image from Mono to full Stereo, and everything in between. But moving along a GUI (Graphical User Interface) that is as easy on the eye as it is easy to use are a few more carefully chosen controls for creatively crafting reverb sounds still further: DAMP AMT simulates the amount — Min to Max — of absorption of higher frequencies by reflective surfaces and allows for darkening or brightening of the reverb tails; DAMP FREQ provides a frequency choice from 0.1 to 15 kHz to tailor the perfect sound of the reverb; RESO sets the resonance/mid-frequency shaping of the damping filter — when more RESO is applied, more gain is added to the band just below the damping frequency and less gain is applied to the rest of the spectrum; and HI-PASS, a filter control ranging from 20 to 1000 Hz to prevent rumble and energy build-up at the bass end of the frequency spectrum, which could cause issues with other instruments. It is also worth noting MIX, with Wet and Dry controls for blending the clean signal and reverb effect.

And as if that was not enough — and not easy enough — to be getting on with, Linda IronVerb includes 68 outstanding presets, providing something suitable for all uses, which is exactly what software application, software effect, and hardware processor developer Audified and experienced mastering/mixing engineer, musician, and programmer Martin Linda’s namesake Linda Audio collaboratively and collectively envisaged when designing Linda IronVerb as the perfect plug-in for anyone wishing to easily expand their reverb palette. Perfect for producers, musicians, and mix engineers favouring a musical and creative approach to reverb, Linda IronVerb’s included feature set is enough to seriously satisfy, yet its layout is simple enough not to be a turnoff — not knowing what to do or what knob to turn need not get in the way of quickly crafting creatively and musically satisfying reverbs,
after all.

According to Martin Linda himself, though, the universality of the resultant reverb is central to Linda IronVerb in that it blends really well with the sound being processed, rather than simply sitting on top of that sound — as is the case with so many reverbs out there. Therefore, it always sits well in the mix. Moreover, its IRONIZE function is simply something to add a metallic-like touch to the resulting reverb effect — or, of course, remove it if that unique twist is not needed. Needless to say, it appears that the Audified Wings plug-in portfolio is all set to fly further with Linda IronVerb!