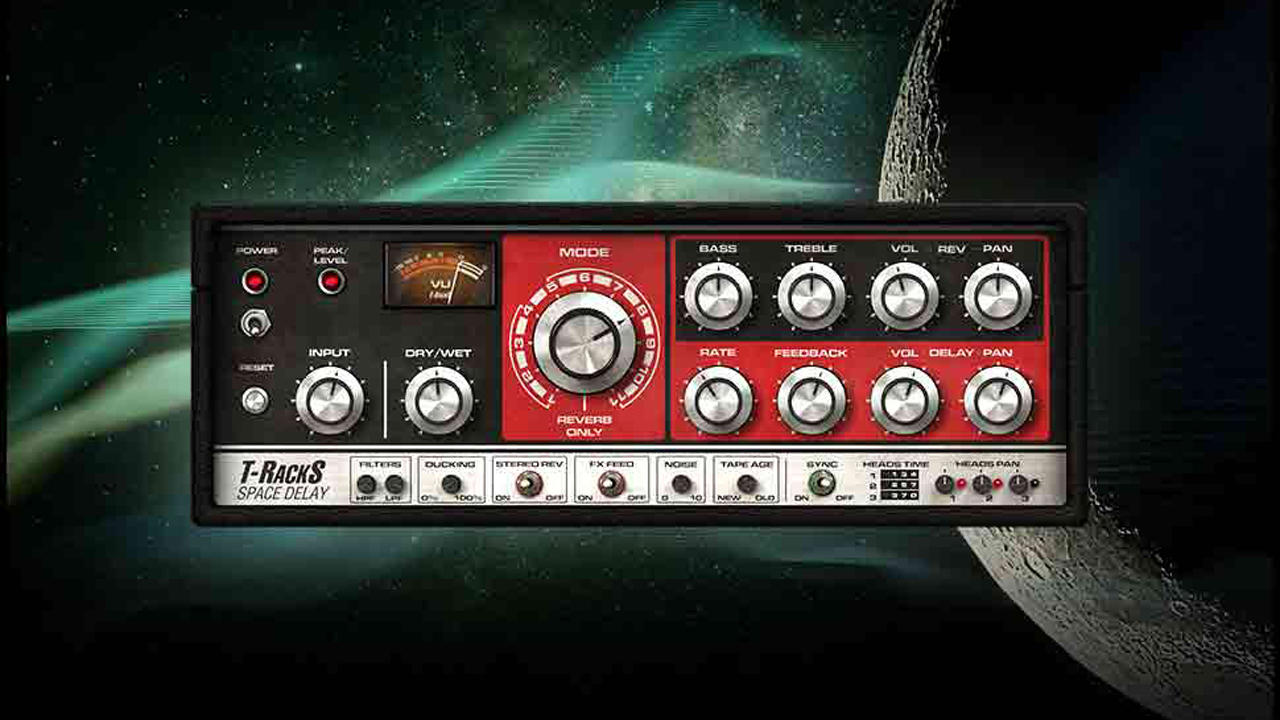 IK Multimedia has released the T-RackS Space Delay for their T-RackS mixing and mastering software workstation. This new vintage tape delay/spring reverb plug-in recreates the detailed character and sound of an iconic tape echo unit heard on countless albums and can be used both as a stand-alone plug-in or inside T-RackS 5.

T-RackS Space Delay offers users a chance to enjoy the flexible controls and instantly recognizable organic sound of the classic Roland® RE-201 Space Echo™ delay unit, modeled with an unprecedented level of detail.

Using the same mix of dynamic convolution and physical modeling as IK’s Tape Machine Collection, the T-RackS Space Delay captures the sound of this iconic effect, down to the finest detail. Just as on the original, users can enjoy experimenting with three playback heads, the variable speed motor and engage the spring reverb to create everything from subtle space to rich, swelling echos.

Like the Tape Machine Collection, creating Space Delay began with an original unit restored to pristine, factory spec condition. Every design element was carefully analyzed, inspected, and measured to create a precise physical model of every circuit, from the preamps to the playback heads.

The physical model, paired with a powerful dynamic convolution to capture every nuance of the spring reverb and other elements of the sound, results in breathtaking fidelity to the original unit.

Stereo operation
Pan each of 3 playback heads and the spring reverb separately for immersive stereo soundscapes.

Input filters
Use the high-pass and low-pass input filters to further shape the sound before hitting the tape.

Ducking
Create dynamic echo effects or cut through a crowded mix with this convenient ducking feature.

Lo-Fi effects
Use dedicated controls for unit noise and tape age to easily add extra grit and grime to tracks for a more vintage sound.

Flexible use options
Like all T-RackS processors, T-RackS Space Delay offers two ways to work: as a single plug-in, or inside the T-RackS 5 shell itself.

T-RackS 5 is the latest version of IK’s industry standard mixing and mastering software workstation that has been used on countless albums by top engineers for more than 20 years. This powerful modular system offers maximum versatility via 45 high-quality processors (EQs, limiters, compressors, etc) that can be used in parallel or series, in a variety of working environments. In total, T-RackS 5 offers everything needed to professionally treat and finalize audio from raw mixes to a perfect finished product. For even more professional results, each version of T-RackS 5 also offers free downloadable signature presets from some of the industry’s top engineers.

T-RackS Space Delay is available now in the T-RackS Custom Shop, from the IK Multimedia online store and from authorized IK dealers worldwide for $99.99.