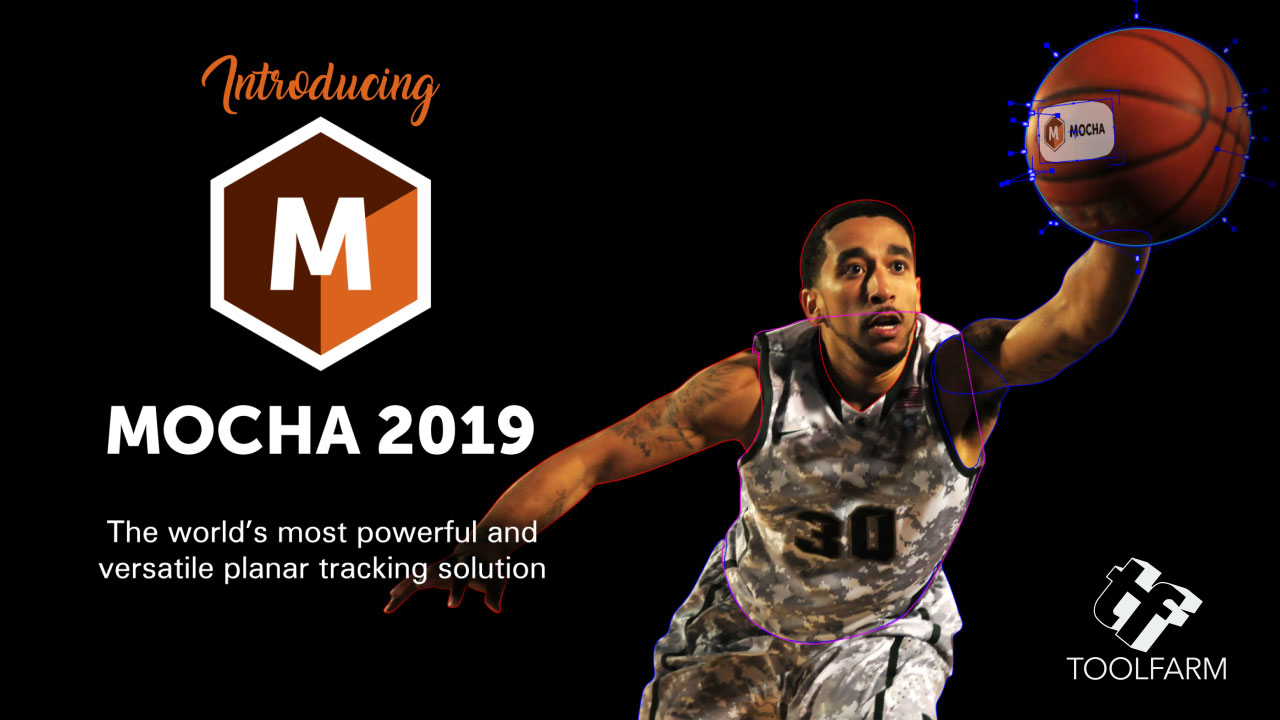 Mocha Pro is the Academy Award-winning planar tracking tool for visual effects and post-production. With a proven record on the world’s most notable film and television projects, Mocha is valued by effects artists and editors for its unique ability to reduce the time-consuming keyframing associated with high-end VFX and finishing. Mocha Pro 2019 features GPU-accelerated planar tracking and object removal, advanced rotoscoping tools, stabilization, 3D camera solver, stereo 360/VR support, and more. New Features Available now on macOS, Windows, and Linux, and as an integrated plug-in for Adobe, Avid & OFX hosts such as Nuke, Fusion, HitFilm, and VEGAS Pro.

Mocha Essentials Workspace: Simplifies the power of Mocha with an updated interface; makes planar tracking easier to learn and faster than ever before

All Mocha Pro and Mocha VR customers that are on current U&S plan, or purchased within the last year will receive a free update to Mocha Pro 2019.

Customers who purchased Mocha Pro v5 or Mocha VR before October 1, 2017, can pay to upgrade using the standard upgrade (with no legacy fee). The U&S plan is now in effect for Mocha product line moving forward. Since Mocha was not part of U&S when v5 was launched, customers who upgrade are effectively joining the U&S plan.

Customers who own older Mocha Pro v3 or v4 licenses can use the legacy upgrade path.

The updated interface makes Mocha easier to learn than ever before and looks great on hi-res and retina enabled monitors!

The Mocha Essentials Workspace brings the power of Mocha to novice level users with a simplified, elegant, and easy-to-learn interface.

Tracking & masking is now faster by reducing complexity and focusing the Mocha interface on the most essential icons and tools. Switch to Classic for advanced modules and customize workspaces for flexibility.

Mocha’s powerful masking tools are improved with 4 new spline tools to speed up shape creation and save time on roto projects:

Don’t paint yourself into a corner, these masking tools are vector splines for continuous editing capabilities and speed on high-resolution projects.

Mocha’s amazing Remove Module has been rewritten to optimize GPU video hardware for up to 4-5x render speed improvements on removals and clean plating projects. For high-resolution 4K projects and 360/VR video resolutions, the resulting speed improvement is a massive time-saver. View our speed test!

Fix it in post! The Remove Module is one of the most popular reasons After Effects artists upgrade from the Adobe bundled Mocha AE CC. It’s like Content Aware on steroids!

Planar tracking is at the heart of all Mocha modules and is used to drive tracking, roto-masking, object removal, and more. Unlimited tracking layers and the advanced AdjustTrack interface can handle reflections, occlusions, noise, and even areas with motion blur or low details.

Now with faster with GPU rendering!

The Remove Module is an amazing alternative to traditional clone and paint techniques for getting rid of unwanted pixels and removing objects. It automatically detects temporal clean frames to blend and align pixels with little user input.

Render graphics onto your tracked screen surface within Mocha Pro 2019 or back to your host timeline with the new plug-in option. Combines with Lens Module for realistic VFX compositing on distorted footage.

This simple and easy-to-use interface allows users to calibrate the distortion introduced by camera lenses. Unwanted lens distortion can be removed or matched for realistic compositing.

Mocha Pro 2019 is the ultimate companion for stereo 360 projects in Adobe After Effects & Premiere Pro.

Unlike feature based camera tracking, Mocha solves the 3D camera based on user-selected planar data. This fast and easy-to-use solution is ideal for set extensions, 3D text, and particle tracking. Additionally, the 3D solver can be used to assist other 3D tracking applications on difficult shots with low detail or significant foreground occlusions.