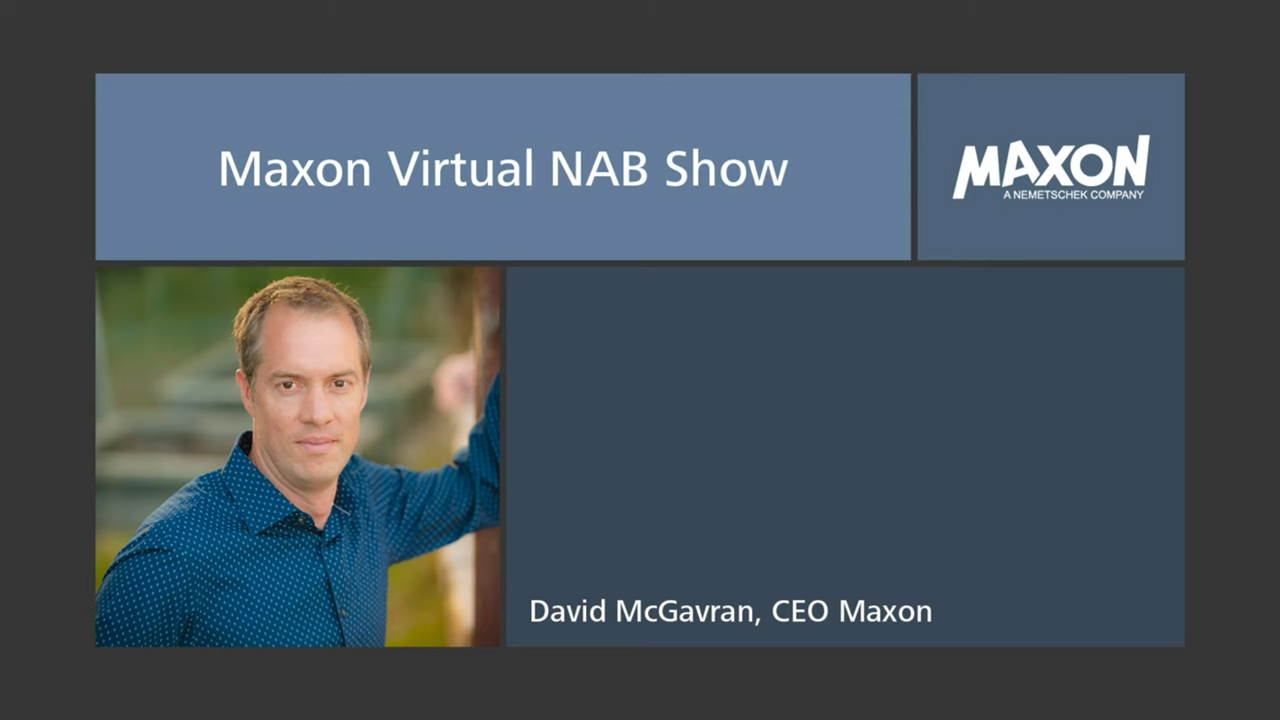 Even though NAB was cancelled this year, MAXON hosted virtual presentations by Andrew Kramer, Daniel Hashimoto, EJ Hassenfratz, Beeple and more.  So sit back on your couch and enjoy all the presentations from Maxon’s virtual NAB Show from April 20-23, 2020.

Dave kicks off our virtual NAB 2020 with the latest Maxon news and announcements!

Andrew Kramer is a creative director known for his design work on film & TV as well as his contributions to the design community through innovative tutorials and creative plug-ins.

Angie breaks down her workflow in her presentation – FUI for Villains

Angie Feret is a Motion Graphics Designer and currently works as a FUI designer at Scarab in Vancouver BC. Her most recent works are in the DC universe on CW shows such as Batwoman, Supergirl, and The Flash, as well as screen graphics for the recently released Sonic the Hedgehog. She also teaches 3D fundamentals and MoGraph using C4D at Vancouver Film School.

Hashi shares his techniques for Quick and Easy CGI Characters. Includes some sneak peeks at a new feature (color matching) coming soon to a VFX suite.

Daniel “Hashi” Hashimoto spent a decade at DreamWorks Animation on the visual development team. Since 2014, Hashi has been using his VFX skills to turn his young son, James’ playtime into the viral web-series “Action Movie Kid” with over a million followers across social media. He’s partnered with Disney, Lucasfilm, Warner Brothers, Target and Toys ‘R’ Us in commercial campaigns, and is now a Senior Content Creator at Red Giant, creating their series “Cheap Tricks”. Hashi still consults for animation studios on upcoming feature film projects and is developing new and fun ideas with his writing partners.

Bryan is a creative director, motion designer, and style-frame artist, with more than a decade of experience. His work relies upon Cinema 4D as a foundation for the creation of broadcast and commercial work. Bryan has worked with a wide range of clients including MPC, Framestore, The Mill, Toros Kose, Blacksmith, WeAreRoyale, HPE, Sarovsky, and Man Vs Machine. He is currently based in Los Angeles and NYC.

Blurring the Lines between Film, Television, and Games

Andy Blondin an award-winning artist who specializes in realtime 3D graphics. He loves design, animation, and motion graphics. Andy is a visual artist who is always striving to push the boundaries, make the most beautiful art that he’s capable of. He loves working and collaborating with other people, and is pretty much a down to earth guy.

Veronica is a Certified Medical Illustrator and the principal of Falconieri Visuals, a scientific and medical illustration, and animation studio. She uses Cinema 4D to visualize microscopic and nanoscale stories for clients in research, biotech, and pharma. When not nerding out about biology, she lifts heavy things for fun.

Getting Unreal with Cinema 4D

Jonathan Winbush has been working in Hollywood doing Motion Graphics for Movies and Television shows since 06. He has worked on properties for Marvel, Warner Bros, Hasbro, Discovery Channel as well as several virtual reality projects with Mix Master Mike, Mark Christopher Lawrence, Candy Crush & The Special Olympics. His work has won several awards internationally and most recently he’s started his youtube channel where he freely shares tutorials and tips.

Andy Needham is a Senior Motion Designer specializing in design, animation, and compositing with over 15 years of experience. Over the years, Andy has continued to develop his craft both technically and artistically and is skilled in a variety of software with particular emphasis on Cinema 4D and After Effects. Andy is an experienced author with a demonstrated history of working in the e-learning industry teaching the software he loves to use on LinkedIn Learning and Greyscalegorilla Plus.

Making the Surreal Portrait “Lady of the Valley”

Sasha Vinogradova is a designer and illustrator. She is currently an art director at The Mill, Los Angeles.

Gary Radburn is the Director of VR/AR and Virtualization globally at Dell Inc. As part of his role, he manages the team charged with developing and delivering VR/AR technology, works closely with Dell customers on VR/AR deployments and founded Dell’s VR Centers of Excellence with locations around the world for businesses and consumers to experience and learn more about VR in the real world. With more than 29 years of experience in the technology industry, ranging from Engineering to Sales and Marketing, Gary has had experience across all aspects of designing successful products and solutions and bringing them to market. He has worked for companies such as Digital Equipment, 3Com and, for the past 16 years at Dell. Originating from the UK, where he managed the OptiPlex client business for EMEA, he went on to lead the Workstation Solutions team in the US and then championed graphics virtualization for engineering applications. This has now progressed into other domains and with the fast adoption of VR and AR solutions, as well as virtualization, Gary has taken the helm for driving these exciting new areas of business.

Lukasz Wieczorek is an LA-based Creative Director with a focus on UI and SCIFI. Past projects include Star Trek, The Walking Dead, Google, Apple, Corvette, GM, Buick, Mazda, Steelcase.

Birds of Prey MOE – How We Got Sketchy in C4D

Penelope Nederlander is a two-time Emmy-nominated art director, motion graphics animator, and digital artist. with over 17 years in the field, her credits include the title sequences for Pitch Perfect, Temple Grandin and both Kung Fu Panda films, VFX on Aviator, Iron Man, and Superman, VFX supervising music videos for Dolly Parton, Sean Lennon, and The Killers, and creating the most recent high-resolution stereoscopic version of the MGM lion logo.

Chris Schmidt is a 3D artist, educator, software developer and now founder of Rocket Lasso. Deeply rooted in Cinema 4D since 2000, he has hundreds of hour’s worth of online tutorials and live streams. Aimed at helping newcomers and professionals alike, covering topics ranging from character rigging and advanced particles setups, Sketch & Toon, and technical motion graphics techniques. Based out of Chicago, Chris also co-founded the annual Half Rez Motion Design Conference and the Chicago C4D user group.

Seth is the Senior Creative Content Manager at Red Giant, where he makes films, ads, and tutorials. He also directs commercials and branded content for Bad Robot, Sandwich Video, and more. He is beloved by all who lay eyes on him.

Crafting a Shot from Styleframe to Delivery

Nidia Dias is a passionate freelance Art Director and Designer with several years of experience focused on styleframes and art direction for motion graphics. Currently living in Porto, Portugal, she works remotely with a number of different studios around the world such as Tendril, Blur, FutureDeluxe, and ManVsMachine just to name a few. Her work involves creating styleframes for pitches and awarded work, Art Direction, Digital Art as well as commissioned pieces.

C4D: The Perfect Tool for Nearly Any Animation Style

Kelcey is a Texas native and current motion designer at Primal Screen in Atlanta, GA. As a design and 3D enthusiast, she loves to create in the digital realm, but can’t resist the chance to get her hands dirty every now and then.

EJ is a freelance 3D artist and educator who has hosted over 150 tutorials on his blog Eyedesyn.com as well as created a 10 week course on Cinema 4D on School of Motion. He’s a craft beer geek who tries more different beers in a year than most people do in a lifetime.

How to Rip Off the Matrix When You’re Home Alone

Stu Maschwitz is a director, photographer, writer, visual effects artist, and designer of filmmaking software. A graduate of CalArts, Maschwitz spent four years at Industrial Light & Magic, before co-founding the legendary visual effects firm The Orphanage in 1999. A champion of accessible filmmaking, Maschwitz wrote The DV Rebel’s Guide: An All-Digital Approach to Making Killer Action Movies on the Cheap, co-created the Fountain screenplay format and the screenwriting app Slugline, and maintains a filmmaking and photography blog at prolost.com. Maschwitz currently serves as the Chief Creative Officer of Red Giant, where he creates powerful, intuitive tools for filmmakers and motion designers.

Raw & Rendered is Joey Camacho – a Canadian graphic designer creating thoughtful, conceptual designs and animations for brands around the world.

Joey is also the co-founder and creative director at AvantForm, a curated licensing platform dedicated to providing advanced CGI artists the most empowering and flexible way to license their work.

Beeple is Mike Winkelmann, a graphic designer from Charleston, SC, USA who does a variety of digital artwork including short films, Creative Commons VJ loops, everydays and VR / AR work.After he began releasing a set of widely used Creative Commons VJ loops he has worked on concert visuals for Justin Bieber, One Direction, Katy Perry, Nicki Minaj, Eminem, Zedd, deadmau5 and many more.One of the originators of the current “everyday” movement in 3D graphics, he has been creating a picture every day from start to finish and posting it online for over ten years without missing a single day.