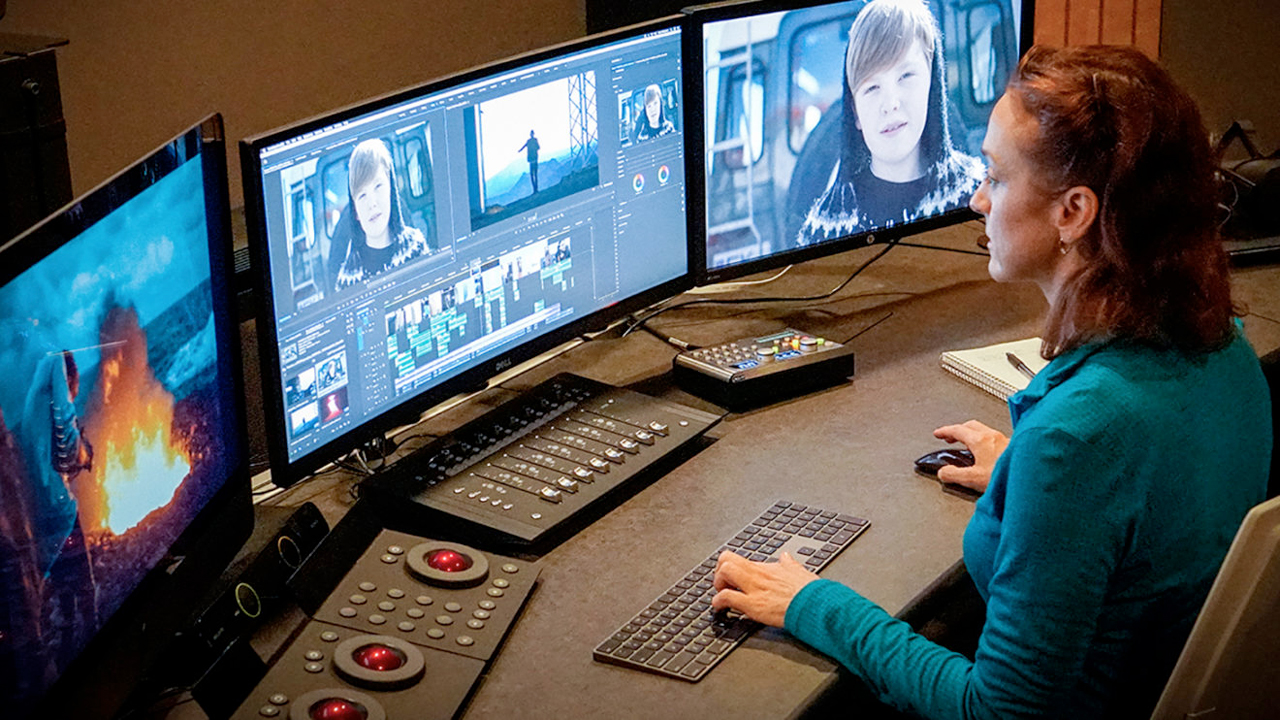 With smarter tools and flexible, connected workflows, Adobe gives you everything you need to turn your ideas into stories and bring them to the screen.

After Effects CC is the industry standard for motion graphics and visual effects, used by animators, editors, designers and compositors to create sophisticated animations and composites for compelling video. The new release offers more design controls and improved performance throughout the application.

Long a hallmark of After Effects and the Adobe apps, connected workflows drive efficiency and empower creativity. Motion Graphics templates encapsulate complex After Effects projects into single files with simplified controls for use in Premiere Pro. Workflows like this, including Dynamic Link integrations, eliminate any need for intermediate rendering between applications, speed up production and keep your media editable at any stage of the pipeline.

Simplified authoring: Designed to streamline editorial in Premiere Pro, After Effects artists can now hand off uncluttered Motion Graphics templates with editable parameters organized into groups with custom headings and twirl-downs for showing (or hiding) each set of controls. Your editors will love you.

Font controls: Unlock font settings and enable editors to change typefaces without having to ask you to resubmit the template. Like everything else in Motion Graphics templates, you decide which elements can be customized and which should not.

Responsive Design—Time: Preserve the integrity of keyframes within flexible, stretchable After Effects compositions to protect designated regions, such as
intros or outros.

Advanced Puppet pins for Mesh Sculpting add new life to your animations. Advanced pins allow you to define the position, scale, and rotation of the pin giving you significant control over how the Puppet effect mesh deforms around that pin. Use Bend pins to create organic movements within a design, such as a breathing chest or a wagging tail.

Depth Passes: Position objects quickly and easily in 3D space. Access the depth data of native 3D elements directly within After Effects and easily composite an image layer to look as if it’s a part of a 3D scene. Apply depth effects to make elements look natural or use depth data as part of your creative workflow to simulate 3D looks. Depth passes work with either the Classic 3D or the CINEMA 4D renderers inside After Effects.

Easier & Faster Expressions: Accelerate your animation workflow with a modern new JavaScript engine. Expressions are easier to create and run up to five times faster than before.

End-to-end VR 180: Augment editorial workflows for immersive content with new support for VR 180 immersive content. Add VR 180 effects and work interchangeably with 180 and 360 material. Output finished videos in the Google VR180 format for viewing on YouTube or other platforms.

Format Support: Work faster with hardware-accelerated decoding of H.264 and HEVC video on macOS, and import files encoded with the HAP codec.

And much more:
Other new features include brand-new in-app learning tools for users who are starting out with After Effects, group invitations for Team Projects, Theatre Mode for previewing flat video in an HMD, the ability to set guide positions numerically, and more.

Motion Graphics templates provide a comprehensive toolset for creating and managing imagery and brand identity in video content, combining polished graphics with efficient customization in editorial.  New authoring tools in After Effects streamline production in Premiere Pro with parameter grouping to organize the template and order the workflow for editors.

Data-driven infographics turn numbers into stories in Premiere Pro. Drag and drop spreadsheet files onto Motion Graphics templates to generate visual representations of your information. Even better: updates to the spreadsheet are reflected automatically in the graphic.

Instantly improve your audio by removing background noise or reverb with new Reduce Noise and Reduce Reverb sliders in the Essential Sound panel. Make audio easy with intelligent tools and take your video productions to the next level.

The Lumetri tools turn color and light into an integral part of editorial so you can refine your cuts and your color in the same creative workflow.

NewSelective Color Grading tools in Premiere Pro and After Effects take the guesswork out of curve adjustments. Expanding on the Hue Saturation “donut,” Selective Color Grading offers more tools with greater precision by pairing values, such as Hue vs Hue and Luma vs Saturation, on two axes that show you exactly how much you can adjust any parameter as you work.

Create content that puts your audience into the middle of the action and jump into immersive video with new support for VR 180, including optimized ingest, editorial, and effects, for monoscopic and stereoscopic content. Output finished videos in the Google VR180 format for YouTube or other platforms.

As with existing support for 360 content, you can view 180 media on-screen as flat equirectangular images, mouse around rectilinear VR view (also on screen), or using VR headsets with the Adobe Immersive Environment. Turn films into experiences with immersive storytelling in Premiere Pro.

Spatial Markers: Review immersive media more efficiently in the Adobe Immersive Environment. Place spatial markers on your media while in your headset so you can easily find those areas when you return to the desktop Timeline.

Theatre Mode gives you a new portable reference monitor within the Adobe Immersive Environment: a virtual screening room for collaborating with your director or producer, whether for 2D or immersive content, or a combination of both.

In this livestream, Principal Evangelist Jason Levine showcases some of the latest innovations coming to the next update of the Creative Cloud Video & Audio apps. This video is chapterized on Youtube.