Wes Plate of Automatic Duck announced today that he’ll be working with the production team at Adobe to help improve compatibility between Premiere Pro and other applications that use the AAF and OMF project interchange formats. 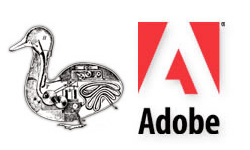 Wes Plate of Automatic Duck announced today that he'll be working with the production team at Adobe to help improve compatibility between Premiere Pro and other applications that use the AAF and OMF project interchange formats.

Wes explains, “Over these many years we've enjoyed improving the interchange between Avid, Final Cut Pro, After Effects, Pro Tools, Smoke, Quantel and other AAF and OMF-friendly apps, and now we're thrilled to announce that Automatic Duck has partnered with Adobe Systems to bring that same interchange functionality to Premiere. To that end I have joined the Adobe Product Marketing team and am really excited about their products both today and new things yet to be released.” He adds, “Harry Plate (my Dad and the co-Founder of Automatic Duck) will be assisting with the technology integration while continuing to focus on supporting other Automatic Duck partners.”

“We view our partnership with an Adobe as a great opportunity for our customers, as we will finally be able to offer the same best-in-class quality translation interface for Premiere as we have offered in the past for other video editing products, enabling customers to seamlessly move in and out of Premiere in their editing/processing workflows.”

Al Mooney, Product Manager, Video Editing at Adobe Systems, is also “absolutely thrilled to be able to say that Adobe and Automatic Duck are now partnering with the aim of bringing absolute best-of-breed workflow integration into Premiere Pro. This means that, as we work together, Premiere Pro’s ability to integrate with the industry’s other leading tools using technologies like AAF, XML and OMF will get stronger and stronger. And so Premiere’s ability to be a good citizen in all kinds of broadcast and post-production workflows will get better and better.

Mooney sums it up “These are really exciting times for us at Adobe, and I can’t wait to start working with Wes and the guys to bring a new degree of integration capabilities to our beloved NLE.”