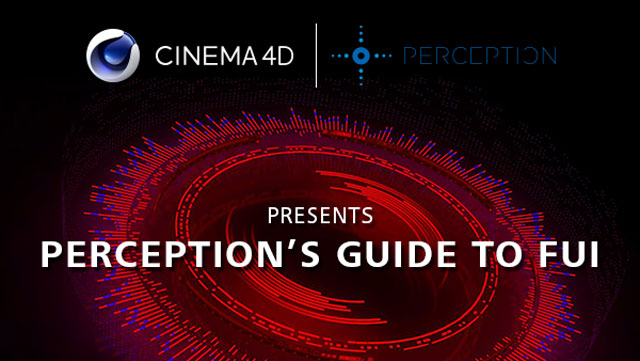 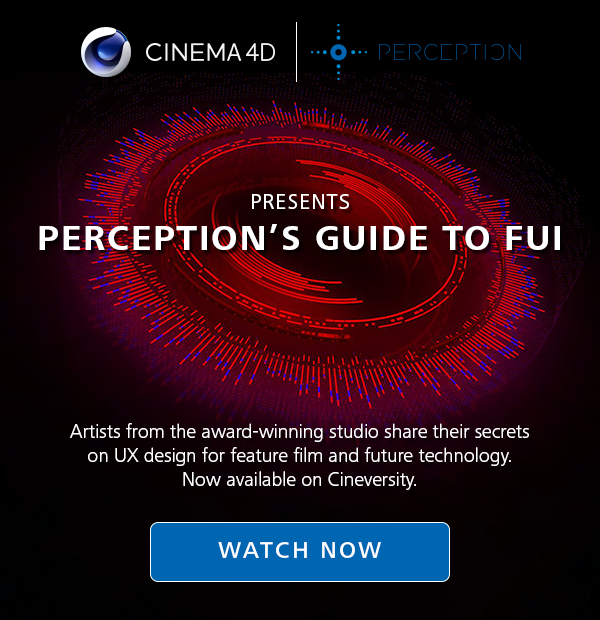 The series was created by Perception, the New York City-based motion graphics studio best known for providing high-end visual effects with an emphasis on futuristic UI and HUD designs for blockbuster feature films including The Avengers, Captain America: Civil War, Captain America: The Winter Solider, Batman v Superman: Dawn of Justice, Iron Man 2, Iron Man 3, and The Avengers: Age of Ultron. Perception’s vision of the future also extends to digital concept and product design for some of the biggest names in technology including Microsoft Hololens, Samsung, Mercedes Benz and SpaceX.

“Cinema 4D’s designer friendly interface and powerful toolset make it an ideal environment for creating dynamic UX,” explains Paul Babb, president/CEO MAXON US. “We’ve given our customers the tools. Now, with the help of Perception we’re able to provide a comprehensive tutorial series designed to teach Cinema 4D artists the technical and creative aspects of designing motion graphics for fictional and nonfictional UX. We’re thrilled they have generously shared their cutting-edge tips and techniques.”

“Whether developing a UI for a superhero, an emerging technology, or a record-breaking hypercar, the robust animation tools and flexible rendering options in Cinema 4D and its powerful After Effects integration continue to be indispensable in helping us visualize the future of technology,” says John LePore, Chief Creative, Perception. “We’re thrilled to prepare this in-depth tutorial series for the MAXON Cineversity community to show how Cinema 4D can empower artists to quickly experiment and conceptualize futuristic design concepts in three dimensions with the greatest of ease.

The “Perception Guide to FUI” tutorial series was developed by LePore along with fellow studio artists Russ Gautier, Doug Appleton and Justin Molush. Each addressed a different technique in the tutorial series including:

Availability
The new “Perception Guide to FUI” is currently available to all Cineversity members at https://www.cineversity.com/vidplaylist/the_perception_guide_to_fui.

[Note: At the 2017 NAB Show taking place April 24 to 27, at the Las Vegas Convention Center, members of the Perception creative team will showcase the new Cineversity tutorial series at the MAXON exhibitor booth #SL SL6324.]

About Cineversity
Cineversity is a leading online resource providing education on nearly every aspect of Cinema 4D. The site features nearly 3000 videos and learning sections that allow users to quickly find the most relevant videos in the Cineversity library covering a wide range of specific subject areas including: Virtual Reality, Character Rigging, Motion Graphics, Visual Effects, Game Design, and more.

About MAXON
Headquartered in Friedrichsdorf, Germany, MAXON Computer is a developer of professional 3D modeling, painting, animation and rendering solutions. Its award-winning Cinema 4D and BodyPaint 3D software products have been used extensively to help create everything from stunning visual effects in top feature films, TV shows and commercials, cutting-edge game cinematics for AAA games, as well for medical illustration, architectural and industrial design applications. MAXON has offices in Germany, USA, United Kingdom, Canada, France, Japan and Singapore. MAXON products are available directly from the web site and its worldwide distribution channel. MAXON is part of the Nemetschek Group.