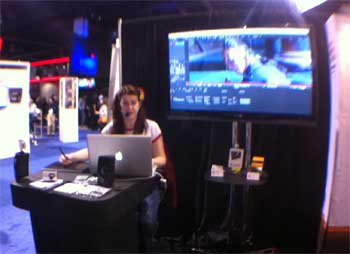 This was a question posted in our forum about Imagineer mocha v3.

DumbMarine (aka Ian): Can anyone explain in layman’s terms the various benefits and drawbacks of one versus the other?

The difference is that our camera solver solves for the planes you track in mocha and builds a camera based off that. Just like we’re not a point or feature tracker, neither is our camera solver a camera tracker. mocha v3 does a 3D camera solve based on planar tracking, while, for instance, the Foundry’s camera tracker is a 3D feature tracker. One difference is that mocha v3 will solve a virtual camera and “select” 3D planes. mocha v3 exports 3D nulls instead of a point cloud. Because mocha is using the planar tracker to solve, one of the benefits will be the ability to track and solve footage with motion blur, footage that goes offscreen, etc. Common difficult tracks such as reflections or obscured tracking areas, the planar tracker can solve.

Our camera solver doesn’t solve a point cloud (but it will give you nulls that represent the planar surface that you can use as “a point cloud” in programs like nuke even though they just mark where your planar surface is). And it doesn’t solve for “the” camera like a camera tracker does, the ultimate goal being to put objects anywhere in the 3D scene or putting volumetrics in the scene. Our camera solver solves for a camera relative to the planes you have tracked.

With our camera solver, usually less is more. Fine two or three really good NON-co-planar planes to track and then hit solve. You will be able to put a 3d object into the scene relative to one of those planes.

The point being that you usually don’t need a huge camera solve to put a 3D object into a scene, as there are numerous solves you can get with a 3D camera tracker anyway. You just need a reference point and a camera that works for the element you want to drop into the shot.

We’re not trying to replace camera trackers. In fact, for blurry shots or other hard to track shots, mocha can even help camera trackers by putting in new, sharp planar information where bad information used to be. That is if you have a need for THE camera the shot was shot with and want to help your camera tracker.

Things to look out for are just the normal things you need to look out for with our planar tracker, avoid tracking reflections, occlusions, slow moving shadows, etc. And understand that you don’t need tons of data for the solve, you just need to track one good plane for a Pan/Tilt/Zoom camera, and two non-co-planar planes for parallax cameras. As in, you can’t track two shapes on the same wall and expect to get a good parallax solve.

For example: if you need to rebuild your entire set in 3D, our camera solver might not be the best option, but if you need to do a simple set extension for a wall or a ground or both, we can totally do that. mocha’s 3D solver does not give you the entire camera space, only select planes. This could be very useful for many match moves, set extensions, particle effects, etc.

It is probably best to download mocha v3 which is now shipping and activate the 15 day trial to do some tests and compare for yourselves. Both products so similar but different things depending on what kind of work you do.

mocha AE v3 is also very useful for roto and 2D tracking. Upgrade from the AE bundle version for $195.

Hope that helps! Let me know if you have any questions.

If you haven't seen the Imagineer customer reel that they showed at NAB 2012, here it is. It's pretty great.