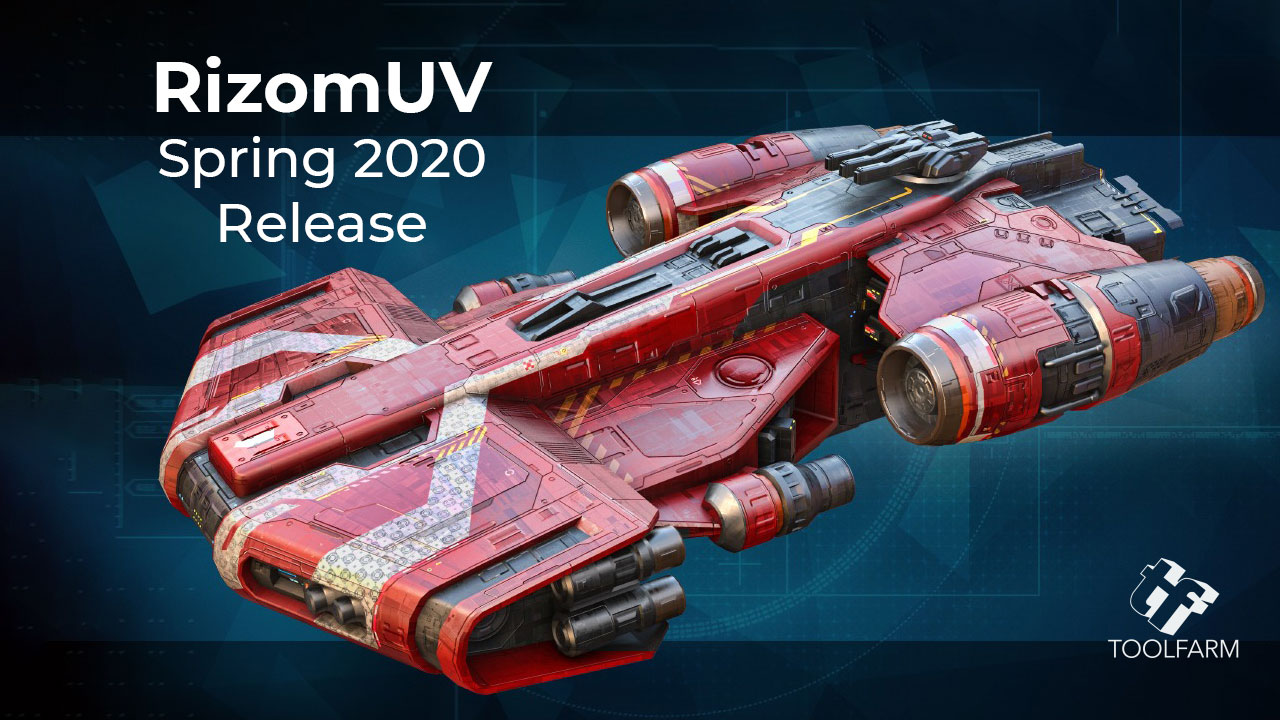 Rizom-Lab has released RizomUV 2020 Virtual Spaces (VS) and RizomUV 2020.0 Real Space (RS), the most recent versions of its UV unwrapping applications.

Rizom-Lab has released RizomUV 2020.0 Virtual Spaces (VS) and RizomUV 2020.0 Real Space (RS). These are the latest versions of its UV unwrapping applications. AskNK takes look at how to get started with this awesome tool.

We’re fortunate to have a community that keeps working with us to improve RizomUV. As well as algorithm improvements, here are the new features implemented since the Winter release from November 2019:

We have made using Texel Density (TD) in RizomUV significantly easier by tweaking the UI and how it works. The functionality, complete with shiny new icons, is in the Layout and Packaging panels. But, the workflow is now a little different. Texel Density is now one, linked setting, as opposed to separate in earlier versions. Texel Density in the Packing Panel is now linked to the Layout Texel Density by default. However, should you need to set TD settings in the Packing panel, you can unlink them from the Layout Panel by pressing the Custom button and then defining your TD.

Texel Density in the Layout Panel

Texel Density in the PackingPanel

We have kept Keep and Average as they were, but we made the following changes to the workflow:

Select Element works just like it does in, i.e. 3DS Max: you select the Element, and then you can, i.e. press I to isolate and unwrap it. The Element selection remains regardless of UVs, so you can always select it for further refinement or packaging.  In the video below, we enter Island mode (F4) but you can use Polygon Mode (F3) as well.  We then Selected an island of an Element. Then we pressed the Middle Mouse Button (MMB) but you can also use the icon in the top right of the align panel

Select Flipped does precisely what it says, it selects all flipped islands or polygons in a model or isolated group if you pressed I to separate something out. Rizom interprets Flipped components as downfacing in UV space. To select them, you press the icon, and hey, presto!

Once the islands or polys are selected, you can use any of the flip options in the flip menu, or you can press U to unwrap them if they are existing islands, that will also flip them the right way in many cases

After doing the spider OCD UVs by hand using the Align tools in RizomUV 2019 we decided to implement something similar to Photoshop’s Align/Distribute function as well. Here is how it works: In the Align/straighten/flip etc. menu in the lower right, you’ll find the new settings. You can distribute horizontally and vertically, and select an average, pixel, or real space for distribution

The Group switch specifies if the primitives must be moved as solid groups or independently.

Located in Edit_>Preferences, RizomUV now has Autosave and Debug options. Autosave is off by default, but when you set it to on, it will save in a location of your choice (the default being RizomUV’s autosave folder in C:\Users\YOURUSERNAME\AppData\Roaming\RizomUV at intervals of your choice, and you can define up to five (5)autosaves. You can, of course, change the location of your autosave

Found in the same location, the Debug log for RizomUV comes in two flavors: The Command log outputs how RizomUV initializes and the commands used in the current RizomUV session you are running. The OpenGL log outputs what OpenGL is doing during your session.
Both will hopefully make troubleshooting even easier, and we urge people to add the command logs when reporting a problem at support.rizom-lab.com. 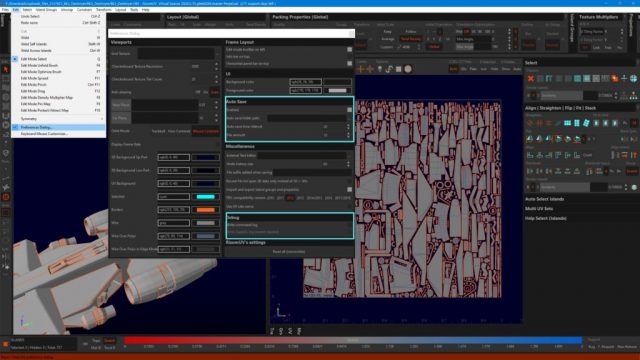 RizomUV now has an option to keep constrained edges aligned when unwrapping or optimising. It can now also create a hinge from a vertex, meaning the alignment will “bend” based on the position of the vertex.  Please note you have to be in Vertex mode for this (F1). It’s kind of like how you insert an extra point in a Marvelous Designer pattern and bend it straight from there.

In addition, based on a user request, we have implemented an Edge Selection Stop featurette, where Edge Selection stops selecting edges when it meets an already selected edge. 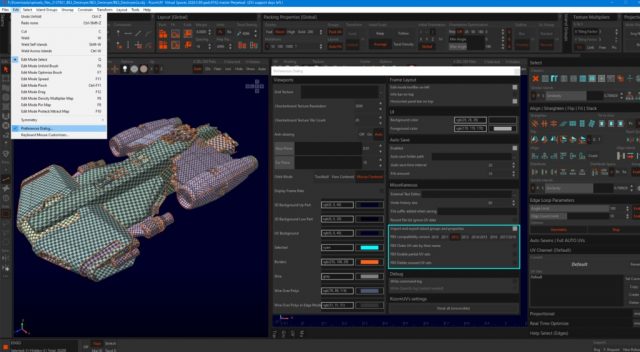 Firm believers in no-pain UV mapping, Rizom-Lab release their first major update of the year for their RizomUV UV-Mapper offerings.

Home of the phrase UV Zen, RizomUV has gained enormous traction as a staple UV Mapping tool for Indie as well as Studio pipelines over the last year. Built on some of the fastest and flattest UV algorithms around, RizomUV makes for fast and easy unwrapping workflows. The new release sports optimizations to its five auto cut and pack algorithms, new alignment tools, a Texel Density workflow overhaul. In addition, new and improved selection features, as well as several quality-of-life enhancements such as Edge Selection and FBX-based mesh improvements.

Team Rizom has also added three new members to its growing script library: A new script to handle preferences, another to handle multichannel mesh, as well as a new script to make dividing hair- or foliage card stacks easier. The RizomUV user community is also heavily invested in scripting, as shown by the frequent updates and support the creators provide for their C4D, Maya, Houdini, Modo, Max, and Zbrush bridges or LiveLinks.

Always focusing on the quality of unwrapping life for its users, Rémi Arquier, founder and owner of Rizom-Lab, and creator of all things RizomUV states:

“We’ve said it before, but it bears repeating: Quality of life is a top tier feature for us, on par with code. This is why we have implemented new features as well as code- and existing feature overhauls for this release. We’ve implemented new selection features as well as a much-requested Distribute feature-set for those in need of fine-tuned alignment and packing options. We also gave the Texel Density workflow a serious overhaul, and we implemented autosave and error logging options. We’ve also heeded user requests and enabled easier backface selection, as well as improving FBX-geometry-based workflows. For those big on automation, we improved the scripting panel and added three new scripts. Other quality-of-life improvements have also been made, such as additional selection options and Optimise function improvements.”

RizomUV is available on Windows, macOS, and Linux. The spring 2020 release offers the following workflow updates and enhancements in RizomUV VS for general 3D work, and RizomUV RS for CAD:

For more details, please read the “What’s new in Rizom” page, or the full release notes on the Updates tab on the product page.

There are currently no plans to increase RizomUV’s price, which has remained static since 2018. Users can buy a variety of licenses: Student licenses have a permanent 70% discount. Indie pricing starts at a monthly 14.95 Euro, as does the annual rent-to-own. Annual licenses are 149 euros. Node-locked and Floating Pro licenses begin at 34.90 Euro. People needing an SDK license will need to contact Rizom-Lab. Each non-SDK license allows RizomUV to be installed on two machines. (Note: Toolfarm has the prices in US dollars).

A fast-growing startup, Rémi Arquier started Rizom-lab in 2016 and began releasing RizomUV late 2017. The name Rizom comes from the rhizome. A rhizome is an always growing, underground root system. And Rizom-Lab has no intention to.

The company is currently on a quest to create the perfect UV mapping toolset for any pipeline. The team is always looking to improve its already impressive capacity for flattening and packing UVs in seconds, not hours. And they’re always on the lookout to make sure the glue binding modeling and quality texturing is a pleasure, not a pain.