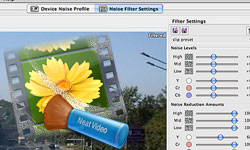 The updated Neat Video 3.1 plug-ins include:

Neat Video incorporates the most advanced noise reduction algorithms in the industry – Neat Video noise reduction algorithms were developed for digital imaging and digital video processing field by a highly-qualified professional research group. These algorithms surpass the quality of all classic noise reduction methods and even that of the wavelet-based methods. Although the wavelet-based methods were developed only 10-15 years ago and are still considered relatively modern, Neat Video uses an even newer and more efficient approach to noise reduction. This approach allows drawing a more clear distinction between noise and details in noisy video data. This helps Neat Video reduce more noise and better preserve true details in digital video clips.