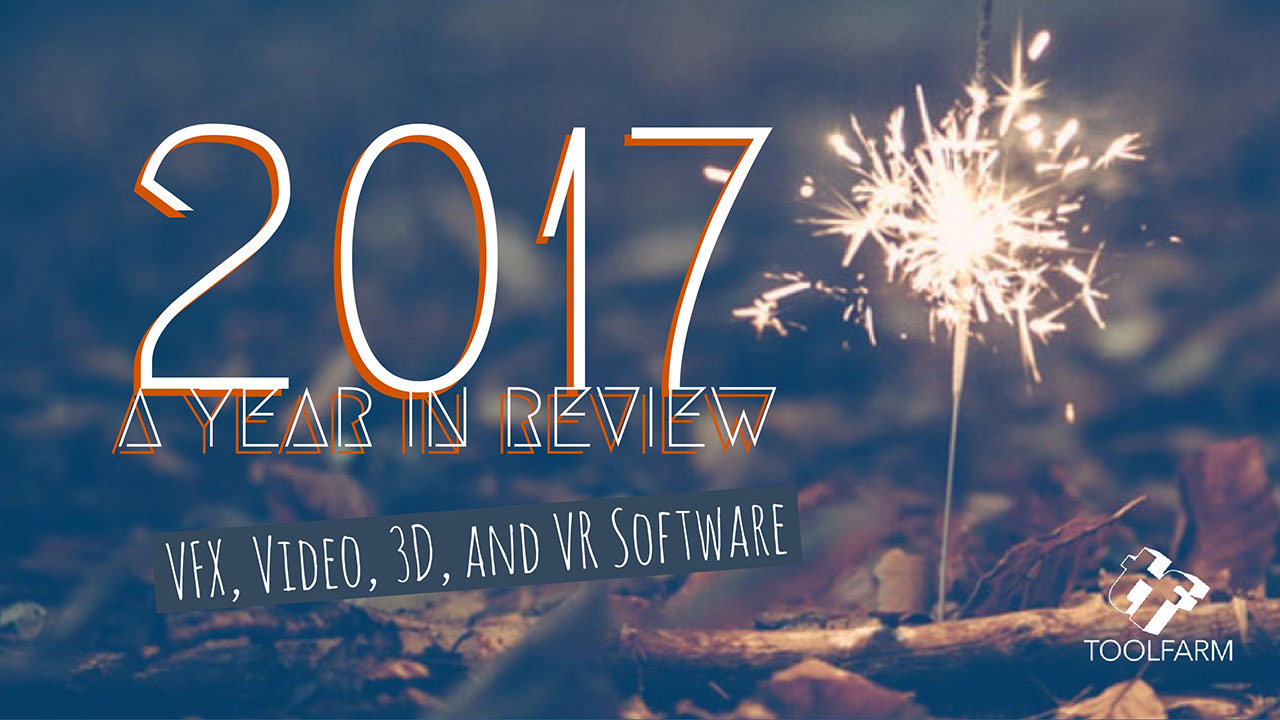 2017 was not all that much of an eventful year for software, unless you’re talking about 360° VR software. Here’s a look back at some major releases and trends in our microcosm.

All of the well known hosts had major updates this year and 2017 seemed to be the year that many hosts have reached maturity. Major releases of established softwares didn't wow us with new features but instead seemed to target speed and reliablility, which is always welcome to users. The one feature that seemed to be added to almost everything is VR. VR Tools popped up everywhere in 2017.

In July 2017 Autodesk Maya 2018, and it's faster and more efficient. There's a new UV editor, new MASH Dynamics a new clumping modifer, and a new Shaderfx Game hair shader. There were major updates to the Viewport and improvements to Bifrost and Animation.Autodesk also includes Arnold Render in both 3ds Max and Maya.

There have been 4 updates since the release of Max 2018, which came out in April, and new features are being added all of the time. The 3ds Max 2018 offers smart asset packaging, data channel modifier, an improved UI with customizable workspaces, and of course, Arnold 5 for 3ds Max, replacing Mental Ray. 3ds Max also allows users to create virtual reality (VR).

This major update came out in May 2017 and included improved performance and new shaders, bundled with 3ds Max 2018. Arnold is now a standalone renderer as well as a plug-in for Maya, 3ds Max, Cinema4D, and Katana.

This release came out at NAB in April 2017, superstitiously skipping v13,  brings the integration of Fairlight audio technology to give Resolve full, post-production audio mixing capabilities. The price also drastically dropped for this release.

Fusion 9 was announced at Siggraph in Autust this year. “Fusion 9 has been designed to support the latest workflows and features new VR tools, entirely new keyer technology, planar tracking, camera tracking, multi user collaboration tools and more.” They really focused on VR in this release with a full 360º true 3D workspace, along with a new panoramic viewer and support for Oculus Rift, HTC Vive and other VR headsets.

FXHome has released major upgrades to both HitFilm Pro and Ignite in November 2017. The latest release of HitFilm Pro comes with with a professional editor, compositor, 800+ VFX and presets, and new built-in animation tools. Ignite Pro 2.0 gives you over 180 plugins for your NLE of choice, including 360° filters. You didn't think there wouldn't be 360° video tools here, did you?

Final Cut Pro X 10.4 came out just a few days ago. New features include 360°VR editing, redesigned color grading tools, tools for HDR media, and support of 8K media. Of course, there are major VR workflow tools included in this release, which likely has a lot to do with Tim Dashwood joining Apple earlier this year.

Vegas Pro 15 came out in the Siggraph rush and includes workflow and UI enhancements, hardware accelleration, new color workflows, and tools to speed up productivity.

Plug-ins for VR and more!

VR Tools popped up everywhere in 2018 and not just in the hosts mentioned above (Adobe, Fusion, Final Cut Pro X, etc.). Mocha VR came out in February 2017 and is based on Imagineer’s Academy Award-winning planar tracking algorithm. It includes a native 360 optimized workflow for familiar 360° video post-production workflows.

The new release of Continuum came out in October 2017 and dropped the word “Complete” from the name. The latest update features Primatte Studio, a VR Unit, Title Studio Templates, new filters, and more! Boris Continuum really is the Swiss Army Knife of plug-ins!

The biggest advancement is the integration of Mocha for tracking and masking into this already stellar package.

Other Updates for plug-in packages