Burning Question: What is Datamoshing? 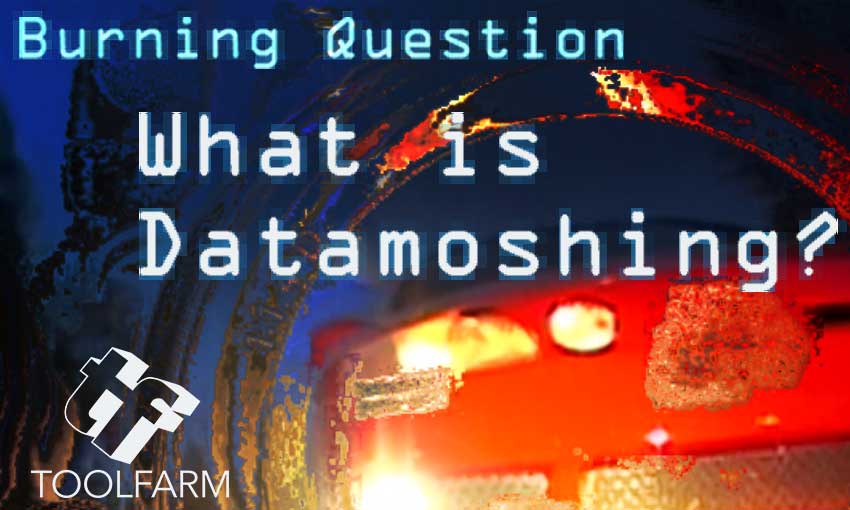 In the mid to late 2000’s, datamoshing, or glitch art, was commonly seen in music videos, in VJ sets or even on public access channels. Here’s an overview of the effect, some examples of what it looks like, a few tutorials and some tools to help you get started datamoshing.

Datamoshing, or databending, is a complex technique where the movement in one layer of video is applied to another layer of footage, using lossy compression and removed frames to create a glitchy, psychedelic result. Think of what it looks like when your Netflix stream is dragging and creates a ghost image transition. KnowYourMeme did a nice overview on the topic.

It may be difficult to picture but there are plenty of examples below. Let me say that it’s a trippy effect but not the most watchable. It gives a person a bit of a headache to watch too long and should not be over used. You won’t likely ever have much of a use for the effect but it’s a fun one to know.

There are a few artists who are known for Datamoshing, but it was Eddy Bergman, a Facebook friend, who posted his tutorial and test video to the AE Portal on Facebook recently, and reminded me of this effect which I knew by sight, but didn’t know there was a name for it. His post and tutorial, in effect, spawned this article. Check out DATA-MOSHING TUTORIAL for PC and he uses AviDemux, which is freeware software for Windows.

This guy started the trend with his art piece, Monster Movie. The song is by the band Plate Tectonics.

David O’Reilly is an award-winning filmmaker and artist and known for innovative projects, including datamosh effects in videos. Check out his site because there is a lot of interesting work there, as well as some freebies for Maya.

Nabil Elderkin directed this video for Kanye West a few years ago and used the datamosh look.

Kneel before Zod! Here’s a clip from Superman from Warner Bros.

oneseconds: having a different kind of facial

The song is Zero Life by Kap Bambino. Oneseconds, is a multimedia collective in Utrecht, NL, used the Datamosh plug-in for Quartz Composer to create this piece.

Tools for Datamosh and Glitch Effects

There are very few real plug-ins for datamoshing because the effect is so complex, but here are some tools you may like.

Here are some tools used in Datamoshing.

Now, just because there are no plug-ins for the effect, you can create your own how brewed effect. Here are a list of plug-ins that can create digital noise, artifacting, compression effects and grungy transitions so you can concoct your own datamosh effect.

Now let me say, I have not figured this out on my own, but according to some tutorials and posts on forums about data moshing, you’ll need motion vectors to create the effect and there are a couple of things you could use for that.

If you’re looking for just feedback or glitch effects, here are a few you can try.

Eddy Bergman pointed me to Datamoshing.com, for step by step instructions.

This is a very weird video that has a link to The One-Stop Datamosh Kit that you can download for FFmpegX. It includes some presets. Even if you’re not interested in the free kit, just watch a bit of the video for the examples.

Noel Powell from Creation Effects put together a tutorial on this transition which alluded him for so long. He is using presets that he is selling but he uses a combination of a displacement map, motion tracking, and the echo effect.

Peder Norrby from Trapcode uses Trapcode Particular and RE:Vision Effects Twixtor to create a sort of Datamosh effect. He walks viewers through creating a Vector Map with Twixtor.