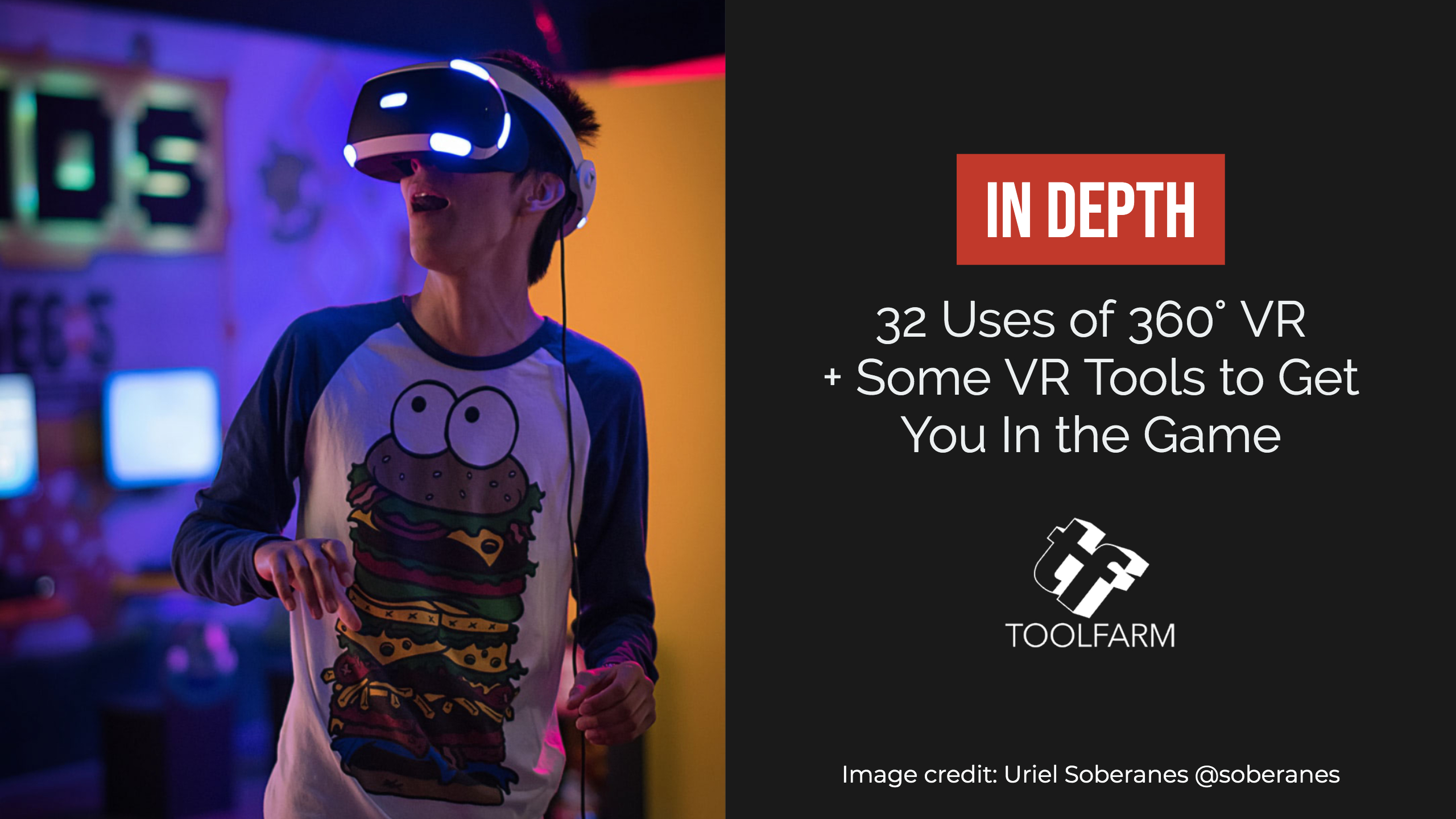 We get asked all the time if we think that VR and 360° immersive video is something that is just a novelty or if it is an important technology. Plus, I’ll go over some of the 360° VR tools available for your favorite NLEs, 3D programs, and more to help you get started in VR.

Larry Jordan’s Digital Production Buzz asked me to come on as a guest and talk about VR and after doing a bit of research I thought I should write an article about it. VR can include 360° Video and immersive video in which the person experiencing it wears goggles. I’ll admit that really haven’t played with VR much but I’ll tell you, some of the VR setups at NAB were pretty impressive. There seems to be some interesting use in VR cinema, especially VR horror films, and, of course, gaming. Virtual tourism, which is cool and all, but is it enough to keep VR around? Is there more to VR?

What VR being used for, besides gaming and entertainment? Here are 32 things.

I spoke with David Baker, a digital media instructor at Ferris State University about this and got his take. David is someone I would call an expert in this area. He works in the digital media department and they’ve been incorporating VR into their curriculum for a few years. He explained that where he really thinks there will be growth is in the education field, especially in medical education. He gave me several ideas including medical uses and training, so I did a bit of research and this is what I found.

VR is being used:

VR is being used in full force in marketing right now to sell Audis, Bourisin cheese, and Happy Meals, too. And, if you want to check out an amazing 360° VR music video, one of my favorites is Gorillaz – Saturnz Barz (Spirit House).

VR Tools: You Probably Already Have Some!

If your clients are not yet working in VR formats, you can see from the list above that it’s a quickly expanding field and chances are, you will be working with VR formats within the next five years. Many major softwares have incorporated VR tools into their recent releases and here are a few. This is by no means an exhaustive list, but a showcase of some popular tools at Toolfarm.

Adobe acquired Mettle’s VR tools last year and the tools are incorporated into Adobe tools such as Premiere Pro CC. Add virtual reality effects to your 360/VR videos without creating unwanted distortion at the poles or artifacts along the back seamline. Effects include VR Blur, VR Glow, VR Sharpen, VR De-noise, and VR Chromatic Aberrations to create colored fringes on video or graphics produced by uncorrected lenses.

Hugh from CreatorUp! walks you through the VR Tools in Premiere Pro.

Get the Adobe Immersive 360° Tools

Learn all about the all-new 3ds Max to VR Workflow.

Render 360° Stereo VR Video with R19’s Spherical Camera, which is included in both Cinema 4D Studio and Cinema 4D Visualize.

Get Continuum Free for 30 Days

Freebie: Get a Free 30-Day Rental License of Boris Continuum 11 for a Limited Time

The VR Unit is also included in the following bundles:

The next version of Final Cut Pro has been announced and will have VR tools. Apple, in fact, bought Tim Dashwood’s technology and much of that will be integrated. Learn more

The Future of VR

VR is going to explode in the next 5-10 years, mark my words. Headsets and gear will come down in price and will be able to do more and it will be explored for so many purposes. The Oculus Rift is only a year and a half old and still pretty expensive.  It would be worth it, for your future, to learn a bit about how it works, even if you’re not working on any VR projects right now. David Baker tells me that Augmented Reality (AR) is growing faster than VR right now because it uses phones and tablets instead of goggles and people and companies are finding a lot of uses for it. Augmented reality is a topic for another article!