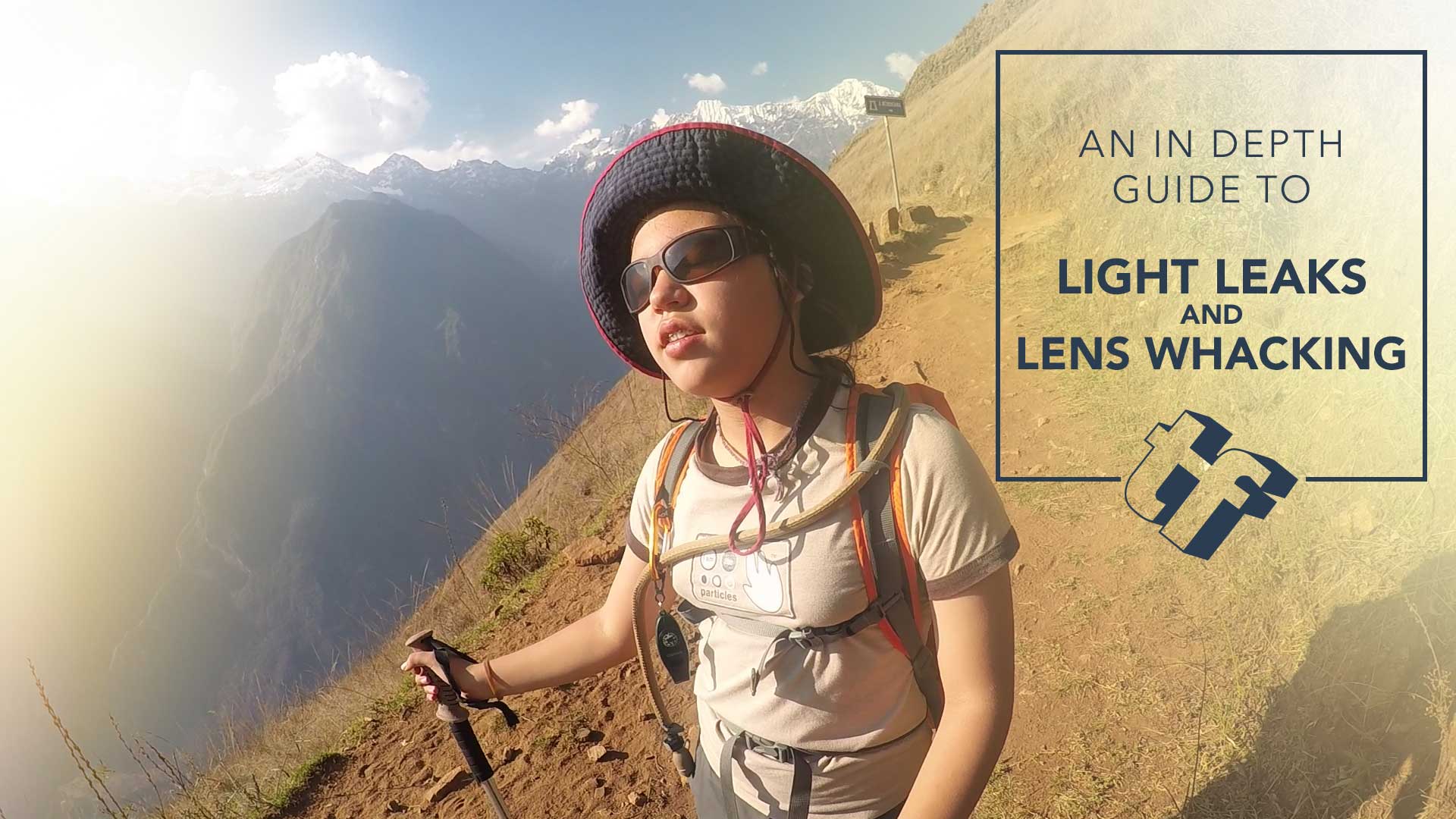 How to Lens Whack

Last week I was watching the mountain climbing documentary, Meru, and there’s a section in the film where they’re doing a flashback sequence about Mugs Stump, a climber who was killed several years ago. Jon Krakauer, most notably known as the writer of Into Thin Air, a book about the Mt. Everest disaster, was in the film, too. They used still photos in this section of the film, with Ken Burns moves on photos, and also a lot of light leaks and texture. This may have been the best example of light leaks I’ve seen used in a film. The effect was noticeable but worked so well with the photos. I emailed Jimmy Chin, professional mountain climber and director of Meru, to get permission to use the clip on the site. I immediately received an out of office response and he’s away for the full month of May, hopefully on a new vertical conquest in some exotic location. After a few days, I did hear back from one of his staff, though. Denied, but very politely. Oh, well. It was worth a shot. See the film! It’s on Netflix.

What are light leaks

So, light leaks… Light leaks happen when a little bit of light enters the container that holds the film. This area should be completely sealed so no light can enter, but sometimes small holes or cracks allow light to come into this area, exposing the film. My first experience with light leaks was in November 1997 when I went to Scotland. I had a 35mm Kodak camera that I kept popping open and exposing my film. I put Scotch tape on the back cover but it didn’t help as much as I would have liked. I have about 6 good photos from that entire trip. Most of the photos are plagued with light leaks. Maybe I was just ahead of my time because now people purposely use apps to add light leaks to their vacation photos. LOMO cameras have light leaks as a feature!

Most of the time with video is used as a stylistic technique to lend some interest to a shot, or in the case of Meru, to add life to still imagery. There are several plug-ins, tools, and stock footage elements for video that allow users to add light leaks to otherwise pristine footage. I spoke with several plug-in developers and others in the industry about light leaks to get some more information.

Light Leaks can also be used over a transition, to cover an edit.

And here’s a slightly violent message about staying in school and not being a slacker.

Back in the early 90’s, when music videos still had some relevance, there were loads of shoe gaze and indie bands with light leaks all over their videos. The problem is that many of those examples on YouTube were ripped from VHS and are low quality. Here’s a pretty famous example that uses light leak transitions between shots. This works so well and looks so natural because of the bright stage lights.

Light leaks are often seen in flashback scenes or dream sequences in films and the look is utilized beautifully in wedding videos.

Brian Fox, Product Manager and creative Director for Sapphire visual effects, tells me that “light leaks are difficult effects to emulate, and it works well to take existing light leak footage.” He told me about how his general practice in the past has been to take SD footage of light leaks and apply an additive blend mode, then scale it all up. Of course, Brian works for GenArts and they now have a killer S_LightLeak plug-in that uses actual light leak footage, but allowing it to be modified and individualized for each shot. “GenArts gives full control over the elements unlike stock footage,” says Brian. Sapphire LightLeaks are pre-animated and the customization works off of speed parameter. Randomness is built in. Speed and randomness are combined to give a completely custom look. Brian explained that there are three huge lens flares that are the lights and each can have the speed, color, etc. modified.

One other added feature is that Sapphire includes, Brian explains, “a funky organic texture that we overlay over the light so it gives a funky grain”. This is exactly what I saw in Meru and I’m now wondering if they used Sapphire S_LightLeak in post production. To see the texture, just move the light around and look at the whole light. That texture, a noise pattern, is in there.”

I asked Brian what type of footage works best for light leaks and he said to use Footage with a lot of range, “Anything with high contrast works. Anything dark won’t work as well. Screen mode, Add mode,  and Leaks Only mode are all options. An additive key or screen key will work well with the light areas of the footage.”

This is the Effect Controls in Premiere Pro for Sapphire S_LightLeak. 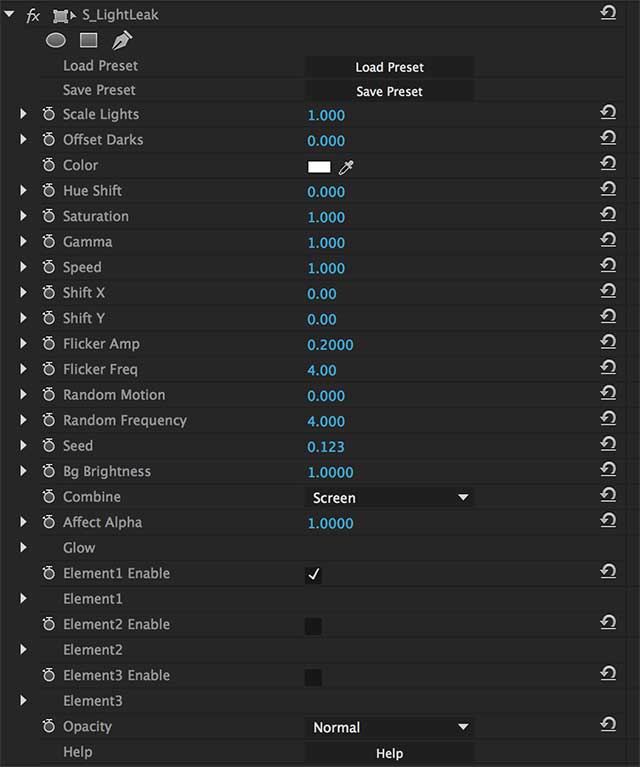 This is Presets Browser in Sapphire for S_LightLeak. 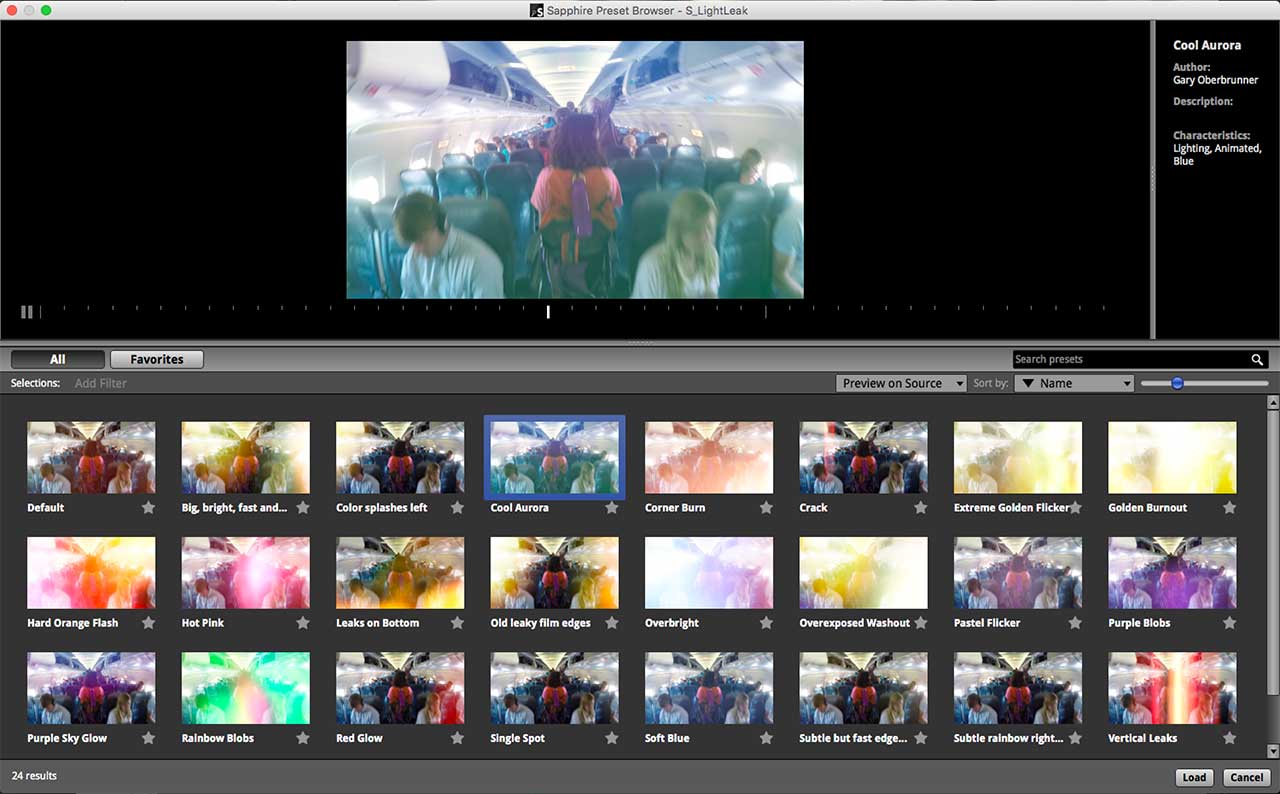 Here’s an example I put together after a webinar. The light leaks in this example are all Sapphire LightLeak.

What it does: Less subtle than a lens flare, this organic lighting effect simulates light leaking into the frame to add nostalgic warmth or a vintage feel to clips.

MSRP: from $499 for subscription, $1699 for multi-host license. Rentals are also available.
Buy now

Try a demo of GenArts Sapphire
Note: You must register for a free Toolfarm account to download demos.

New in BCC 10, the Light Leaks are a cool and eye-catching addition to your footage. The light leaks are procedural, customizable and high resolution. Peter McAuley, Senior Product Manager at Boris FX explains, “Because the effect is procedural instead of raster based, it will scale without any loss of image quality and will look the same at any size.” BCC Light Leaks also ships with about fifty presets that are fully customizable.

The ability to scale to infinity is certainly something that can’t be done with stock footage, and you know I love presets, but I asked Peter to give me a few reasons why people should choose BCC Light Leaks over using stock footage.

This is the Effect Controls in Premiere Pro for Boris Continuum Complete’s BCC Light Leak. 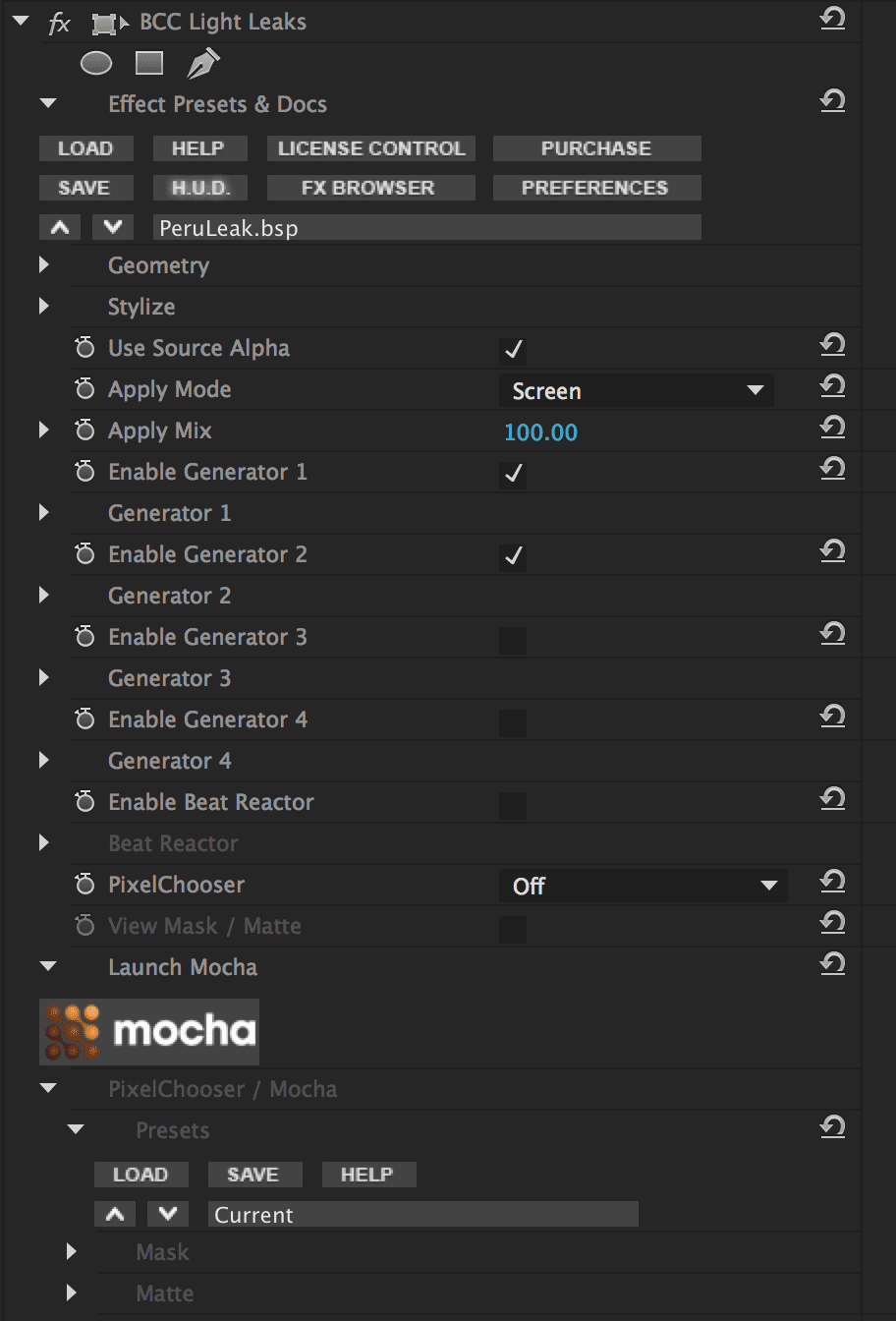 This is FX Browser in BCC Light Leaks. 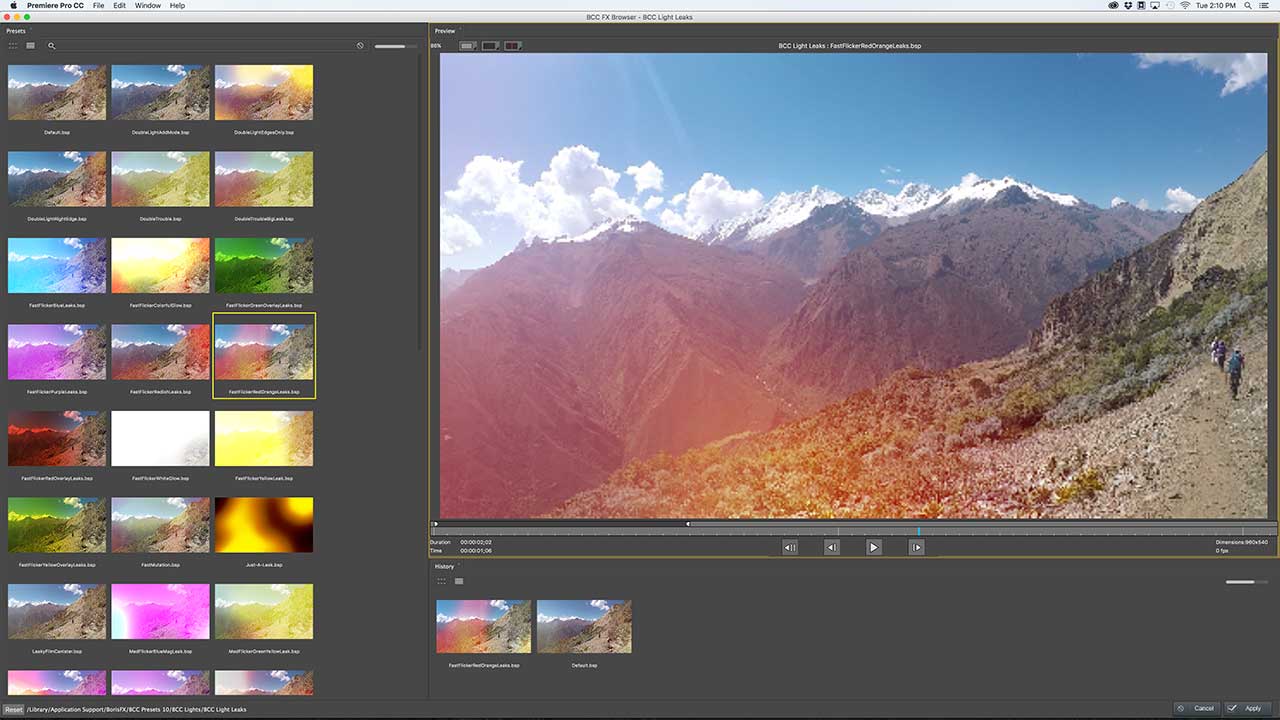 Peter McAuley from Boris FX says that lens whacking effects can also be recreated in BCC, “So from what I’ve read about Lens Whacking, to properly replicate the effect you would also need to blur a portion of the image, right? Because presets can be saved from the PixelChooser (in BCC) separately from the filters main preset function, it’s very easy to create a matte / mask in the Light Leaks filter, and then reuse it in one of the Blur filters to achieve a convincing result.”

Peter gives this tip for working with BCC Light Leaks, “Although the filter has the ability to generate up to four independently adjustable Light Leaks, the parameters in the Stylize group at the top of the filter offers global control of several aspects of the filters result, such as Opacity, Exposure, Hue, Saturation, blending mode etc. The amount of flicker, as well as the speed of the flicker, is also controlled from within this group.”

Here’s an example I put together after the BCC Webinar I did on creating a reality show open. This includes lots of light leaks.

What it does: Light Leaks creates organic and naturalistic “in-camera” light and exposure effects to stylize and enhance your footage.

Try a demo of Boris Continuum Complete
Note: You must register for a free Toolfarm account to download demos.

“Luca’s Light Leaks are carefully crafted light effects that allow limitless combinations and outcomes,” Luca says. These unique light leak effects are facilitated by a plug-in rather than stock footage. Users can adjust the Geometry and Stylization of the effects and then pile on extra filters or multiple instances of the generator, to achieve endlessly different results.

Here’s the Effect Controls for Luca Visual FX Light Leaks in Premiere Pro, showing some presets that are available.

Below is an an example I put together after a webinar for Boris FX. I swapped out the light leaks and used Luca Visual FX Light Leaks in this example.

What it does: Cool, easy to use light leaks effects with user control of the geometry and stylization of the light leak.

Try a demo of Luca Visual FX Light Leaks
Note: You must register for a free Toolfarm account to download demos. Mac only. Requires FxFactory, which is a free install.

Rampant Modern Light Leaks are super slick and numerous light leaks that can be used on any video by dragging them into your project and using blend modes like overlay, lighten, or add.

I talked to Sean Mullen, Founder and CEO of Rampant Design Tools and he had loads of great advice for working with light leaks. “Avoid using light leaks and effects with alpha channels. They never composite properly and tend to look fake.” He adds, “Start with blend modes, specifically Screen. You can also use Add, but fair warning, if you’re working in a broadcast environment Add can lead to illegal values.”

If you’re looking for a more subtle light effect, Sean says, “use a tint filter and match the light effect to a prominent color in your cut. If you want more punch, use a contrasting color.”

And how do you choose how to stylize your light leak to make sure it fits with the pacing of your piece? “Make sure to pick the light effect that best suits your cut. Choose hard hitting light effects for fast pace, high energy edits. Use something a little more gentle or subtle for a slower or more emotional piece.”

What it does: Modern Light Leaks contains 150 2K, 4K, and 5K hand crafted light leak effects for film and video.

Note: Rampant Design Tools are no longer available at Toolfarm.

What it does: With Lumineux, you can quickly add light leaks to any project by simply dragging and dropping right inside of Final Cut Pro.

Note: Luminex has been discontinued.

What it is: Lens Whack is a product that gives you that simulated Lens Whacking effect in post production, without you having to try to focus and film while hovering your lens over the sensor…and you don’t risk breaking anything either!

Note: You must register for a free Toolfarm account to download demos. Mac only. Requires FxFactory, which is a free install.

How to Lens Whack

Like my experience in Scotland, the idea is to let light in to create light leaks on your footage. Here is a cool example from James Miller, a DP.

Lens whacking or “free lensing”, is when you hold a disconnected lens in front of your DSLR and some light sneak in, giving your footage an artistic light leak look. Here’s a video explaining the technique.

All about Free Lensing / Lens Whacking

The upside is that your footage will be completely unique. The downside here is that the light is hard to control and you can’t pull focus. This is why you may want to add this effect instead in post production.

lens whacking in after effects

Here are a few more articles on Lens Whacking.

The art of “lens whacking”, real lights leaks and ones done in post. – Phillip Bloom