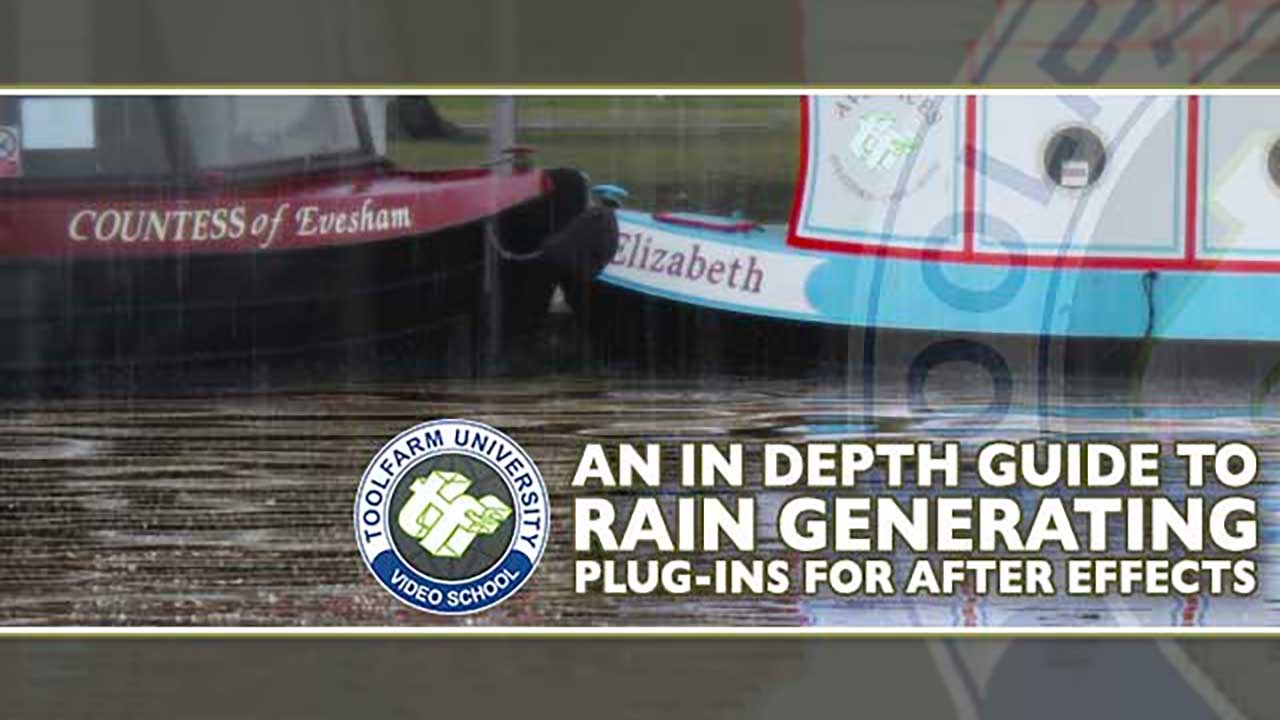 This article was originally published May 1, 2013. Right after NAB, as I’m getting my cable upgraded to 50MBPS, the cable guy needed to get to my basement, where we discovered flooding! It’s being taken care of but it’s raining again. How bad is the rain? Here’s a headline for you:

All this rain has been the inspiration for this article, but by no means is this my first interaction with rain plug-ins.  In my book, Plug-in to After Effects, I wrote a section on Rain Generating plug-ins. Since the book came out, I actually had the chance to put most of the rain plug-ins out there to use. I worked on a film called 7 Stones (note: very little of my work is left in the film.)

So, yeah, it’s wet but, hey, at least it’s not snow (although snow wouldn’t flood my basement!)

Why not just shoot rain if there’s so much of it?

There is a multitude of rain plug-ins and particle generators that can create rain, and some look more realistic than others. I’ll talk a bit about five of them: GenArts Monsters GT M_Rain, Boris Continuum BCC Rain, Cycore CC Rain, Digieffects Delirium RainFall, and Trapcode Particular.

All of the plug-ins auto-animate. All of them have options to control the speed, angle, direction variance, random seed and amount of rain. Some have options for splashing, although not all are that well implemented. Another nice option is to be able to use a mask to avoid splash in certain areas. Pan and blur are also nice features to have. One feature that all of them need is the ability to have depth close to the camera so that drops nearer to the camera are larger. Trapcode Particular is the only one that did what I wished. 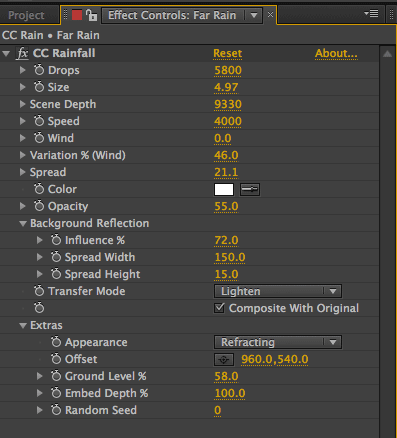 CC Rainfall is a particle generator for quick and easy rain, and it ships with After Effects so if you own After Effects, you already own this plug-in. There are several options to customize rain motion and to set a specific range of randomness to individual raindrops for increased realism.

I placed the plug-in on a solid black layer and applied the effect, then used Add Mode to composite over the background. There is an option to apply the filter right on the footage and use “Composite With Original” and a pull-down menu build into the filter with Transfer Mode, but it looks terrible composited this way. There are options for Background Reflection which can be used when you apply the effect to the background footage. This brings in some of the colors from the background. I didn’t use this feature since I didn’t composite.

I used two layers of rain, one set to larger raindrops and one set to smaller raindrops, to create the illusion of depth. There is also an option for Scene Depth which shows the closer raindrops are falling faster while the further raindrops fall at a slower rate. This looks pretty realistic but the drops are all the same size, no matter how close or far they are. I could have put this on 3D layers and moved the camera to match the motion of the footage, but instead, I chose to use the Offset option, to offset the speed. I linked it to the position of the camera with a simple Expression.

I adjusted the Speed, Size, and Amount as necessary to give a realistic rain, and of course, turn down the Opacity to make it believable There are Wind, Spread, and Variation (Wind) options too.

Overall, CC Rainfall is very easy to use and fast, but the parameters are much more limited than with Boris Continuum’s Rain or GenArts Monsters GT M_Rain.

Note: In After Effects CS6, CC Rainfall was new. You can open and render older projects with CC Rain but it is obsolete.

More on After Effects CC Rainfall

Boris Continuum BCC Rain is a robust rain generator that comes with several presets and rain’s lifespan is adjustable. Of the plug-ins specifically made for rain generation, this is my favorite. There’s a feature to add a Splash Layer or to Splash on Ground, which is referenced from a 3D layer positioned as needed. The splash is tough to see. I would like to be able to control the opacity of the splash and turn it up a bit. The water in my shot is reflective so the splash is lost. The BCC Rain also includes the PixelChooser, which is included in most of the BCC plug-ins and allows for more control in selecting and masking exactly where you want an effect to appear. The PixelChooser is fantastic for separating out elements in the shot via masks or mattes. It gives the user total control.

The Rain Depth options are not quite as good as I hoped. I still had to make use of 3D layers and distribute them in 3D space to give the illusion of depth. Again, keep the opacity low and use Layer Modes to composite.

BCC Rain is easy to use and has a breadth of options and is GPU accelerated so it’s pretty fast. With the right settings, the rain can look very natural. The presets are a wonderful starting point. That’s one thing I really like about Boris plug-ins… lots of presets. I rarely use them as is but it makes it so much faster to get going.

In this simple After Effects tutorial, Imagineer System’s Mary Poplin shows you how to add realistic rain to a shot with plug-ins from Boris FX and mocha AE.

Lastly, Trapcode Particular, while not a plug-in specifically for rain, makes some darn nice rain. The plug-in really did everything I needed with total control.

I liked the fact that I can position the particles in Z space using Position Z so that I can get big drops close to the camera. Positioning the rain in 3D space and creating the depth I wanted was a piece of cake. Particular works with the After Effects Camera and Lights so compositing with other footage on 3D layers works well.

The splash, generated using Physics Model set to Bounce and the Aux System, looks fantastic. I can control the opacity and color of the splash too. I plan to put a quick tutorial together on how to make a splash and the settings I used. Below is a screenshot of the Physics and Aux System with what it looks like in the black square. The bottom half of the screen shows the splash, which looks a lot better when it is moving.

The only real downside of using Particular is that it is not an easy plug-in to just jump into. It takes a time to learn how to use the Physics engine and Aux System. Luckily, Particular is a very popular plug-in and there are a vast number of resources out there to help learn the plug-in.

Simon walker uses After Effects, along with Trapcode Particular and VFX Chromatic Displacement to simulate raindrops. He starts with the rain preset in Particular’s Designer and modifies some settings. Then adds a second instance of the particles, and adds the Turbulent Displace Effect. Finally, he very cleverly uses VFX Chromatic Displacement, which is also available in the Red Giant VFX Suite.

A new addition to this list, Next Limit Realflow is a water generator that can generate tidal waves, rain, and pretty much any type of liquid.

Here are a couple of tutorials:

Another new edition to the list, X-Particles is a full-featured particle generator for CINEMA 4D and makes some super cool rain… like this example…

Jason Sadderland of Big Puddle Films put together this fantastic two-part series on making a torrential downpour. Fantastic work here. He looks like Simon Pegg with an American Accent. Watch these before you watch the tutorials below. This is chock full of great tips.

Ryan Connoly of Film Riot Shows you how to add depth and interest to your shots. He uses After Effects in the tutorial, pulling a quick mask with the roto brush. He uses some multiple stock rain videos and a sky image and explains how to make a believable composite, complete with color grading. He does use Maxon Red Giant VFX Suite in the tutorial.

Danasa Arsad of ActionVFX gives shows how to composite rain using stock video from Action VFX. He is also using After Effects. In the tutorial he uses Mocha and the Puppet Pin tool. He also ads some steam coming up from the pavement as a finishing touch. Pretty impressive work!

Make Your Movie Rain More Dynamic & Sexy with These Dirt Cheap DIY Tricks – This is one of the best tutorials out there for making rain. Good stuff here.

Freebie: Rain Tool for Autodesk Maya – We’ve all heard the term “Make it rain,” well… now you can for free! Click for a tutorial from Animcgi.com and a link to download.

Artificial Rain in After Effects

Save 50% on New Licenses - Limited Time