Spill is the colored light reflected from your background and onto your actor. Spill can show up on light colored clothing or hair, on shiny or reflective elements, around the edge of footage, and it can be a big problem! It can be very easy to fix, or difficult on finely detailed, extremely reflective or semi-transparent areas. Here are some methods of fixing spill. This is another in Toolfarm’s ongoing In Depth series on green screen. We’ve brushed upon the topic of spill in other articles in this series, mainly giving tips on how to minimize spill during shooting.

What is Spill? Baby, don’t hurt me…

It’s actually a problem that is fairly easy to fix but can be difficult on finely detailed or semi-transparent areas. There are some great plug-ins and tricks that I’m going to cover that will help you immensely with the spill. In this article, I’m working with a shot from Hollywood Camera Work, who kindly allows anyone to use their content for purposes like this.

There are a lot of spill removal tools on the market and many keyers have built-in spill suppression. The image below is from Hollywood Camera Work, which has a lot of great shots to practice keying, and they are free! The model’s white coat shows a strong green cast and is a really nice example for this article. Hollywood Camera Work says: “ISSUES: The real issue in this shot is actually spill. It’s hard to see how much there really is because our eyes compensate, but if you cut her out, you’ll find that she looks like The Incredible Hulk. We also have a wild over-exposure in the top corner, which ends up behind her head.”

Green spill is what you will likely have to deal with, as the green screen is what is used in the majority of productions these days. That said, on the film, Universal’s Evan Almighty, visual effects company Industrial Light & Magic (ILM) utilized blue screens on the flood effects. Because of the blue coloration of the water, blue spill not so much of an issue and blue is less noticeable to the human eye than green is.[1] If you’re compositing the scene into a rain forest, the spill may just blend into the shot.

You can avoid quite a bit of spill when you’re shooting by lighting the background separately and actor separately. Don’t use a glossy or overly bright green screen because the reflectivity will cause the green to bounce onto your foreground elements. The image above from Hollywood Camera Work is very bright, but it’s not necessary to have such a neon glowing shade of green. Below is an example of a shot that uses a much less bright screen and doesn’t have the problem with spill that the shot above has. It is a bit dark but the scene she is composited into is also dark. Digital Anarchy has some nice tips on lighting your green screen properly.

Here are three basic rules given by Digital Anarchy:

There are several spill removal tools on the market and many keyers come with built-in spill suppression. This example has a lot of spill on the actor’s white coat and on her skin. If the actress were a blonde, you’d likely see a lot in her hair as well.

First, I’ll go over a few tools that are included in After Effects, so tools that you likely already own. Note that the spill suppression filters are applied AFTER the shot is keyed. Some tools have built-in spill suppression that is automatic, so the “before” examples may use a different keyer to show the original green. Also, if you pull a good key, you may not even need to use any type of spill suppression.

Something strange that I discovered while writing this article is that, generally, the simpler a spill suppression plug-in is, the better the results seem to be. Slide the bar back and forth to see the difference before and after spill removal with After Effects Advanced Spill Suppressor.

There are two Methods for Advanced Spill Suppressor, Standard, and Ultra. The Foundry Keylight is included with Adobe After Effects and is the go-to keying plug-in for many After Effects users. It has all the features you need, including a built-in spill suppressor and for added control, you can use Edge Color Correction, and it works great.

The Bias controls work a bit differently than the spill suppression in other programs. With Keylight, the foreground is despilled automatically, which is great news. If you feel that it’s still a bit too green for your liking, you can remove more. How? After you choose your Screen Colour from the image, adjusting the Alpha Bias parameter. Use the Alpha Bias eyedropper to select a prominent color, such as skin tones or hair color. This will help Keylight in separating the foreground and background colors. The Despill Bias and Alpha Bias colors are locked together by default and that will usually give you the best results, although you can uncheck Lock Biases Together and use them individually. It is possible to pick a color in the bias that gives a really clean alpha channel, but a crummy despill, and vice versa.

Mark Christiansen, author of Adobe After Effects CS3 Professional Studio Techniques has a great tip for using Keylight for spill removal only. “Follow the same steps as you would to key the footage, but don’t adjust any controls below Despill Bias (which you should select using the eyedropper on a representative area of skin tone or equivalent). Change the View setting to Corrected Source; the footage is keyed but the alpha channel remains unaffected.”[3] To explain this one a bit, the Boris Chroma Key Studio ships with Boris Continuum Complete but there’s also a Boris Unit for keying, Boris Continuum Unit: Key and Blend. This is the same tool within each product.

I demoed the BCC Chroma Key Studio at NAB 2014, when it was released in BCC 9. Boris has always had keying tools but I never liked them.  BCC Chroma Key Studio was a game changer. It pulled a great key for me and has great tools for pre-keying with the Quick Mask that you don’t see in other plug-ins. This eliminates the need for a separate garbage matte.

The spill suppression worked beautifully and I didn’t even need to adjust settings.

The Spill suppression is under the Chroma Key settings which are hidden until Spill Suppression On is checked. The Spill Suppression Group includes Spill Ratio, Spill Tone Mix and Spill Tone Range. According to the Boris Continuum Complete manual, for best results, adjust the controls in the order they are listed.

1. Adjust the Spill Ratio until most of the green background color is removed from the foreground image. With green screen footage, setting the Spill Ratio to 0 will turn your image magenta (or yellow for blue screen). Boosting the value to 200 will turn off the Spill Suppression.

2. Spill Tone Mix will bring some of your green or blue background color into your foreground. If you increase Tone Mix value, you can compensate for some of the magentas that were brought in by lowering the Spill Ratio.

3. If you increase the value in the Spill Tone Range, it gives a broader range of the foreground color mix. This can also bring some of the original skin tones back into the footage. Primatte Keyer and Key Correct use the same Spill Killer technology. Both products are available together in the Red Giant Keying Suite. Spill Killer is very simple at the core. There are not a lot of bells and whistles, but it worked well on the footage. I used slightly different settings for Tolerance so that you can see the difference.

For Primatte Keyer, Enable Spill Killer needs to be checked and the Color Mode set to Green. I set the Range to 58% and set Tolerance and Strength to 100%.

To remove the spill with Key Correct Spill Killer, you just need to apply the effect to your layer. I turned down Tolerance to 51%, and the Range to 58%, which helped to avoid giving the model a red face. HitFilm Ultimate may be a newer tool to many of you. It is sold now only as a standalone but the plug-ins come with the standalone. In other words, the plug-ins are still made but no longer sold on their own.

HitFilm Ultimate comes with several keying tools including Advanced Chroma Key, Matte Cleaning, Spill Suppression, and Auto Light Wrap. Spill Removal is another one of those tools with hardly any options, but it is very simple to use and the tools worked really well. I ended up lowering the Strength a bit to 0.80. I kept the Suppression Type set to Extended to achieve my result.

Check the product page for specifics on supported versions.

If you don’t have any of the tools listed above, these plug-ins also have spill suppression abilities

Remove spill then choke the matte

If you have a fringe of color around your actor, remove it first with spill suppression. If you don’t remove spill first, you run the risk of choking the matte in too far and losing your edge detail.

Here’s an excerpt from Plug-in to After Effects: Third Party Plug-in Mastery by Michele Yamazaki by Focal Press I had the best results when I shifted the Green Hue a bit to the reds too, to offset some of the green, even after taking down the Green Saturation. If you don’t have After Effects CC 2014 yet, try this instead of the old After Effects Spill Suppression plug-in. It will be a lot easier to use and the results are stellar.

If you’re using After Effects CC 2014, check out the preset named “Keylight + Key Cleaner + Spill Suppressor”. Apply it to your green screen footage to get your process going very quickly. 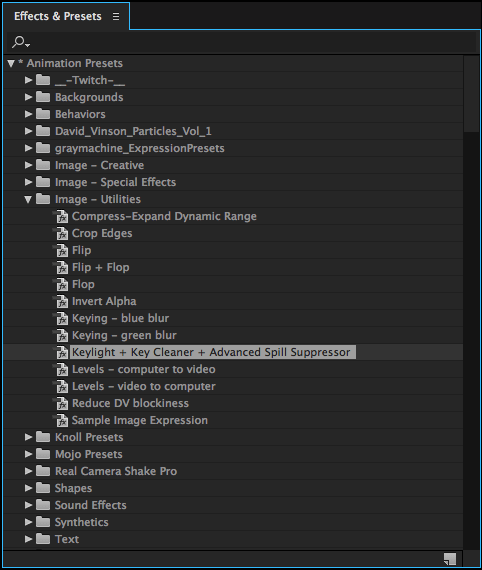