In Depth: Using Adobe After Effects for Print Work

After Effects is made for motion work but it can also be used for still imagery and print work. I recently did a birthday party invitation for my daughter with a Harry Potter theme and lots of effects. Here are some things I learned along the way.

Introduction – Why Use After Effects for Print

You may wonder why I chose to use Adobe After Effects instead of Photoshop to create this invitation, which will be printed as 4″x6″ photos at my local Walgreens and handed out to select classmates. It may seem strange to use a video/motion tool for print but there are many reasons to do so.

I have all the best filters in After Effects. If you have tons of great effects in After Effects, like I do, and don’t have any equivalent in Photoshop, AE is your guy. For the record, I don’t use AE for all of my print work, just effects-heavy projects like this one.

Better 3D in AE. In the end, I use a combination of After Effects and Photoshop to achieve my look. Although I know Photoshop inside and out, I much prefer to work with the 3D Camera, Lights, and 3D Layers than warping to achieve a look in Photoshop. I don’t like the 3D features in Photoshop at all. They are slow and ornery.

The non-destructive workflow in After Effects, There is no need to Convert Layer to Smart Object to apply effects that you want to be non-destructive. If you scale down in AE, you can scale up without losing your resolution.

Better workflow – Because AE links to media and lets you have it sitting in your Project panel, you don’t need to keep everything in your layers, in case you might use it later. If a file is updated in Photoshop, you can just reload it in AE.

Soloing and Locking a layer is nicer in AE. I’ve had the problem with Photoshop files with tons of layers and Grouped layers, that locking a folder sometimes causes the problem that each layer needs to be unlocked or un-soloed one at a time. This is really annoying when it happens several times in a row. Is this a bug or a feature?

Clients Need Stills from Video. Also, when I worked in a post house, on several occasions the client needed a high-res output of graphics created in After Effects and didn’t ask for them until after the project was fully built (of course!). Depending on the content, sometimes it was feasible, sometimes it was not. Hey, it was the days of SD! This is really no longer an issue since everyone seems to be working in HD or higher.

Here is the final invitation. That’s not my real address, obviously! 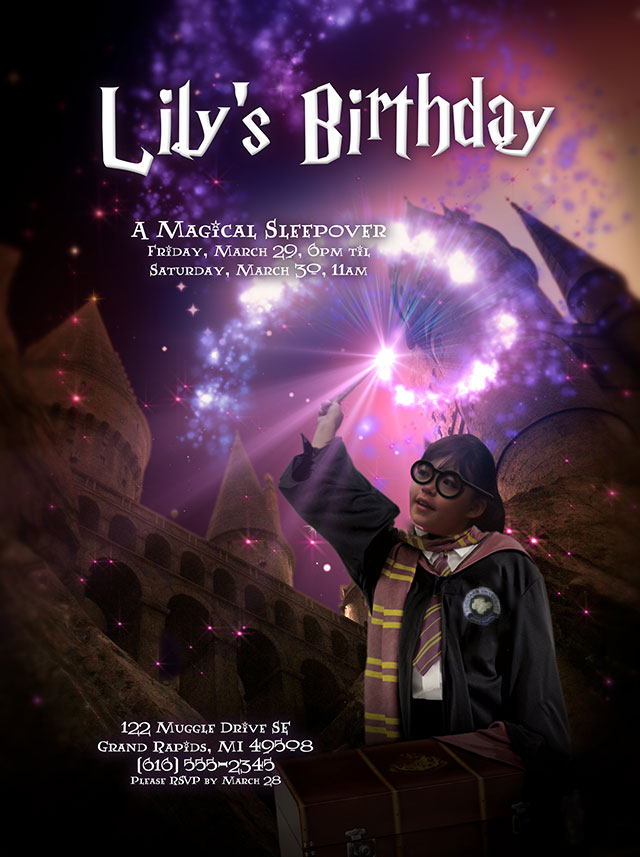 How to set up an After Effects Comp for Print

Lay it all out in Photoshop first. With this example and others that I’ve done in the past, each time I was compositing imagery from photos with elements in After Effects,  I set up the elements in Photoshop first. I knew that I wanted a 4×6 photo image in the end, so I set the image up at 72ppi and made it VERY large. It’s roughly four times the size of a 4″x6″ image at 72PPI. 300/72=4.166666.7. My numbers aren’t exactly math. they are actually slightly larger. None of my images were scaled up. You may need a different resolution, but the math is not too difficult. It doesn’t hurt to make your comp a bit larger.

Why set it up at 72ppi? This is the size After Effects uses and it cannot be changed. 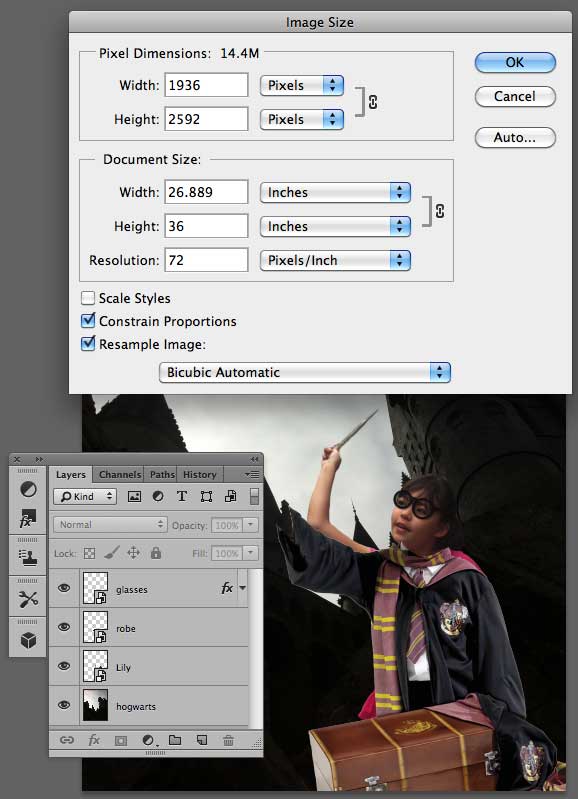 These are my elements from Photoshop. A word of advice is to always name your layers appropriately so that you can find them easily in After Effects. Common sense, yes, but you can’t know how many times I’ve opened projects from others where the layers are named Layer 3, Layer 6, Black Solid.  It’s frustrating and can interrupt your workflow.

Adding Effects in After Effects

Import your layered Photoshop document into AE as a Composition with editable layers. Now is where the fun begins.

This image is obviously effects-heavy. Here’s a breakdown of the effects I used.

Starry Skies – My original had a daylight sky but I ended up preferring a night sky. I doubled up on my effects here to get exactly what I wanted. I used Boris Continuum Complete BCC Stars, with the shiningStarsCloseGalax.bcp preset. Then I used GenArts Monsters M_NightSky set to Bolder Twinkle. M_NightSky gives the option of being completely accurate with star positioning but I just set it up as I liked it. [Free trials of Boris Continuum Complete and GenArts Monsters] 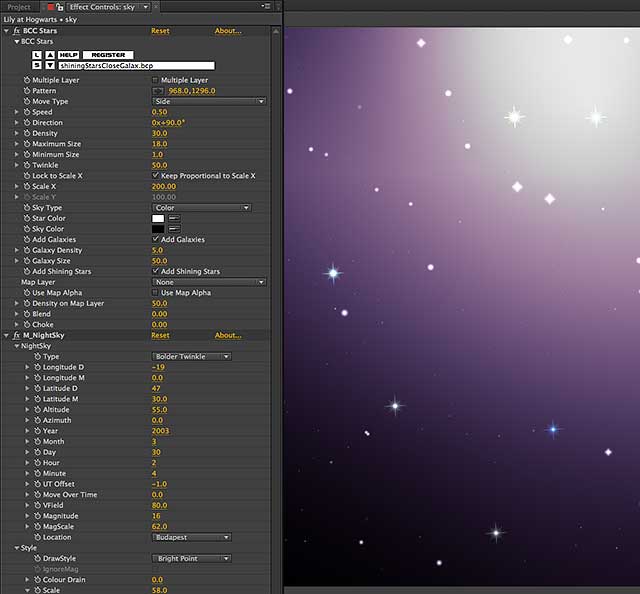 Castle – Above the Sky layer, I placed Hogwarts Castle, with the background cut out, some serious Levels adjustment, and Red Giant Key Correct’s (Discontinued) Edge Blur to soften the edges and help the composite.

Fairy Dust – On the next layer, I used Digieffects Delirium DE FairyDust (Discontinued). To give it more sparkle, I added Trapcode Starglow to the FairyDust effect for a nice star shaped glow, using the Heaven and Magic Colormaps. [Demo] 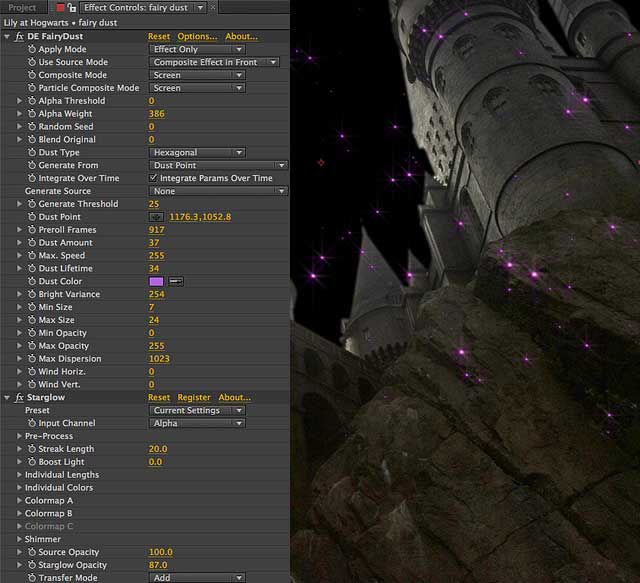 Color Correcting the Background Elements – Next, I added an Adjustment Layer to warm up the particles, castle, and the sky a bit. You’ll see the effect in the next step.

Background Particles – This layer consists of Boris Continuum Complete BCC Particle Emitter 3D [Free Trial]. I used the ConfettiSparkleTrail.bap effect, modified to fit my scene. On top of that in my Effect Controls panel, I used BCC Film Glow, which gives it a soft, bright look to the particles. I was asked why I didn’t just use Particular and I honestly had a tough time positioning the particles. BCC Particle Emitter 3D is very easy to use and the preset was close to what I needed. (Note: More on using Trapcode presets in the next section – Working with Large Comps in AE). 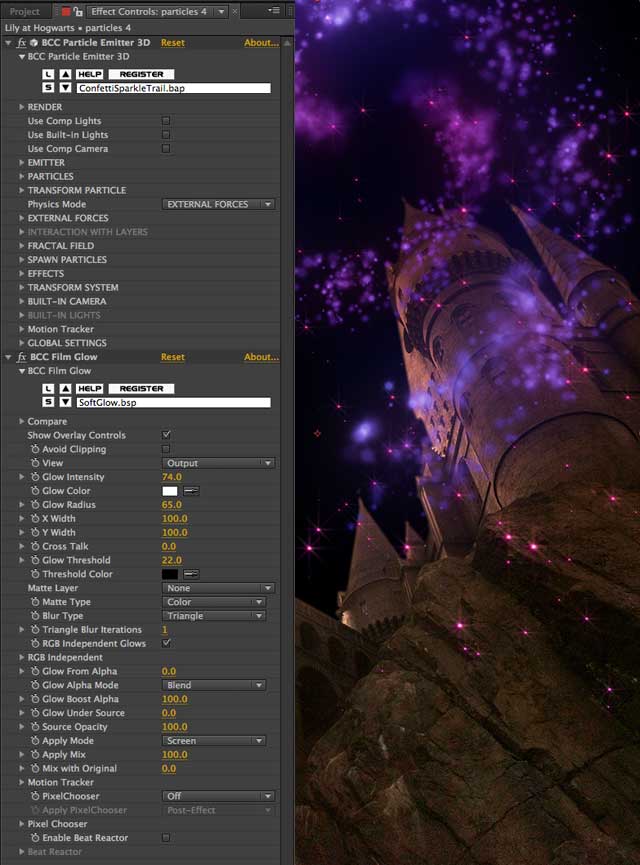 Lily – The next layer is Lily. The only effect I used on her is Red Giant Key Correct Color Matcher, with the target layer set to the Castle, to bring the colors into the same universe.

Gryffindor Robe – The robe was placed over Lily and I used the Puppet Tool in After Effects to pin it into position. Worked like a charm. I also used Red Giant Key Correct Color Matcher and Edge Blur to match the composite more seamlessly.

Foreground Particles – The particles that come out of the wand are the same as the background particles, just modified a bit. It’s BCC Particle Emitter 3D and BCC Film Glow. 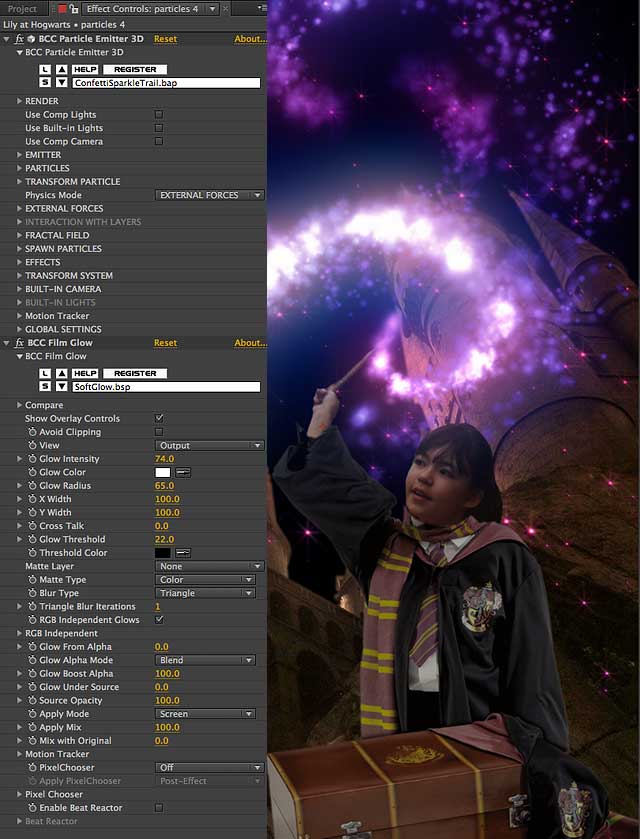 Glasses – Positioned and rotated in 3D Space as necessary.

A Flare on the Wand Tip – I used Video Copilot Optical Flares to create a little spark at the tip of her wand. Try building a flare like this in Photoshop.

Color Correction – Last but not least, an instance of Red Giant Magic Bullet Looks, applied over everything to give the final look and to help match colors. The Sky layer is turned back on for the final example. 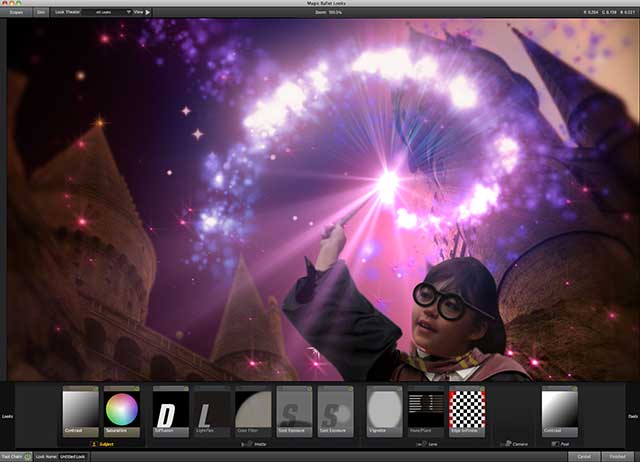 Text – After the final look was nailed, I added text in After Effects. The fonts were Harry P and Lumos, both available for free at Mugglenet.com.

Tips on Working in After Effects with Large Compositions

Believe it or not, the effects don’t always work quite as you think in a huge composition. Here are a few words of advice and a few of the problems I had to work around because my comp was so large.

Keep your duration short – One second is more than enough time. You’re creating a still image. Some filters have the option to pre-roll effects and you can also make a longer layer and slide it down the Timeline if you need more pre-roll.

Watch out for RAM Hogs – Lily really wanted me to do a cartoon look on her scene but the fact is, that with this large comp, Red Giant ToonIt tied up my computer for multiple seconds with each screen redraw. It was tedious to modify the effect and wait for the redraw. I tried a couple of other Toon plug-ins and did not find anything I liked. I ended up skipping the cartoon look. I’m not a fan of the Charles Schwab look anyway.

Are your images too small for print? Try using a filter to uprez, such as Boris Continuum UpRez or Red Giant Magic Bullet Instant 4D, instead of scaling in AE. The Magnify in After Effects plug-in may also give better results than scale. Try it out.

Presets and Effects  – Some presets and effects are made for SD or HD and those presets can appear very tiny. You’ll just need to tweak them. I ran into this problem with Trapcode Particular and Trapcode Form presets and in the end I went with Boris Continuum Complete and Digieffects DE FairyDust for my particles and sparkles.

Turn off Effects and Solo Layers While Working – If the Particles layer or some 3D layer is causing your machine to run slow and you don’t need it to see it at that very second, turn off the visibility of the layer or solo the layer.

Exporting – Export the frame as a TIFF, JPG or image format of your choice. The file is RGB so if you need CMYK, you’ll need to change it and resave in Photoshop.

Simplify your project as much as you can. Do as much in Photoshop as you can, such as masking. Delete layers and effects you’re not using. Pre-render everything you can.

Work in 8-bpc, even if you’re exporting at 32-bpc. This will make screen redraw time faster. Set it to 32-bpc before exporting. I’ve found that some plug-ins will cause After Effects to crash and I’ll get an error about invoking plug-ins. This happens when I get low on memory or switch to 32-bpc.

Is Working On Stills Easier in After Effects or Photoshop? Sebastien Lavoie describes why working in AE can be better than Photoshop for still images.