If you’re looking to add some visible camera shake or frame-to-frame jitter to your footage, there are a few different ways to achieve this effect. You can do it with plug-ins, presets, with the Wiggler and even by tracking points that you’ve gathered from handheld footage.

Let me start by saying that this article is NOT about how to avoid or remove camera shake. It’s about the various methods of adding some natural camera shake to your footage. You can do it with presets, with the Wiggler and even by tracking points that you’ve gathered from handheld footage.

Another reason you may want some camera shake in your footage is to add some excitement to a shot. For example, you may want to simulate an impact of a boulder falling from a cliff and the camera will shake when it hits the ground. When an explosion happens, the camera may shake to show the impact of the explosion.

If you’re looking to stabilize camera shake, check out these articles:

There are plug-ins to stabilize footage, as you probably know, but there are also plug-ins that do the opposite. Here are a couple of options.

“Camera Shake simulates motion artifacts generated by randomly displacing the camera position and orientation”, but this plug-in does more than that. Not only does it move the position of the footage, but it also distorts color channels. This allows users to create an effect of the camera crashing and glitching. There are options to selectively control each color channel separately so it can be customized completely.

FxFactory works in the following hosts: 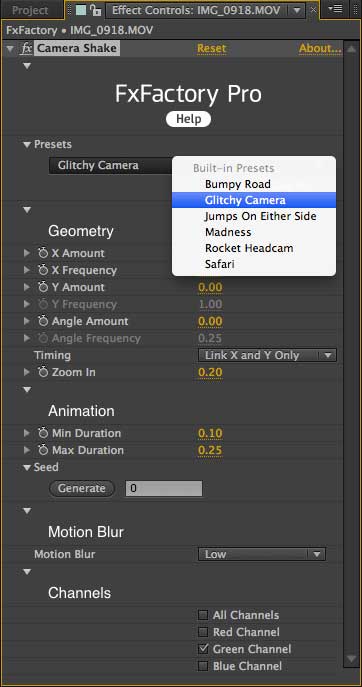 From the user guide: S_Shake “applies a shaking motion to the source clip over time with translation, zooming, and/or rotation.” Apply the filter directly to the clip and adjust parameters such as Amplitude, Frequency, Phase, Z Dist, Motion Blur and more. There are several separate options for X, Y and Z Shake Parameters, which is unique to this plug-in. 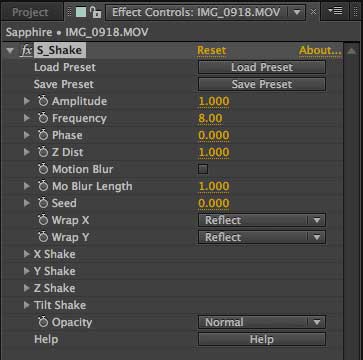 From the user guide: CoreMelt C2 Gadget Camera Shake “animates the image as if being shaken by an earthquake or an explosion. Animate the amplitude parameter in order to create the effect of an object passing the camera very fast or a heavy object hitting the ground in front of the camera.”

This plug-in doesn’t have many options and it zooms the camera in as it shakes, as to not reveal edges when Zoom to Fit is checked.

This plug-in package works in the following hosts: 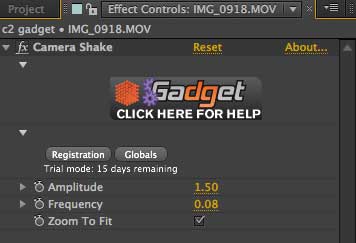 Video Copilot posted this pack of freebies on their site in 2007 but it’s just as useable today as it was then. With this pack of presets, you can not only add camera shake to your footage but easily change speed, intensity and rotation with slider controls.

After Effects Shake Using Wiggle Expression by The Pixel Lab

5-After Effects Shake Using Wiggle Expression from The Pixel Lab on Vimeo.

Learn how to use the wiggle expression in After Effects to make the camera shake or to replicate a handheld camera feel.

Creating Camera Shake with Motion Tile and a Wiggle Expression

3D World explains how you can use the Motion Tile plug-in which ships with After Effects, and a simple Wiggle Expression to create some shake.

Nice tutorial but turn down the Pumped up Kicks a bit, dude!