In Depth: Lens Flare Plug-ins for After Effects: Knoll Light Factory, Part 2 of 5

One of the best known Lens Flare Plug-ins for After Effects is Red Giant Knoll Light Factory 3 (aka KLF). It’s the most recently updated of the plug-ins. I’m covering in this series and also has been around the longest. It was developed by John Knoll, the visual effects supervisor at Industrial Light & Magic (ILM). The first article featured a couple of interviews from John Knoll, which will give you, dear readers, a bit of insight behind the man who created visual effects for some of the most famous Hollywood blockbusters.

The Features of KLF3

Red Giant Knoll Light Factory 3 (aka KLF). It’s the most recently updated of the plug-ins I’m covering in this series and also has been around the longest. It was developed by John Knoll, visual effects supervisor at Industrial Light & Magic (ILM). The first article featured a couple of interviews from John Knoll, which will give you, dear readers, a bit of insight behind the man who created visual effects for some of the most famous Hollywood blockbusters. In case you missed it, here’s the excerpt from the first article, Indepth: Lens Flare Plug-ins for After Effects (Part 1 of 5):

On the subject of digital lens flares… care to guess who is credited for inventing them? It’s John Knoll, visual effects supervisor at Industrial Light & Magic. He developed Knoll Light Factory, which I’ll cover in the next article in this series.  Luxology interviewed John Knoll in 2008 in a modcast titled Father of the Lens Flare and Red Giant did two indepth interviews with him.

This is something I should have probably covered in the first article, but let’s get something addressed right away. There has been talking in the past of other lens flare plug-ins ripping off the terminology and flare elements from KLF. I’m talking about things like spike balls, lines, etc. Comparing this to a car, for example, whether you have a Ford or a Toyota, both will have a steering wheel, brake lights, cup holder. All of these things do the same task on any vehicle but they may be designed slightly differently. You could say the same for lens flare plug-ins.

The Features of KLF3

Taking a look at the effect controls on the right, you can see some of the main features of the effect, aside from the lens flare builder and presets, which I will get more info shortly.

This is where the light source comes from. The light can be positioned on the X,Y-axis with the Light Source Coordination coordinates, allowing users to tie tracking data to the position of the light source.

Enabling the Use Lights box allows the source to be tied to lights. Why is this cool? Imagine you have a scene and you’re creating a bunch of similar lights with lens flares. You could add 20 lights to your comp, positioned as you like, and then have another layer with Knoll Light Factory applied. This effect can control each flare with one effect.

In the example with the car, I tracked both headlights with Imagineer mocha AE, then tied the tracking data to the position of the lights. On a separate Solid Layer, I applied Knoll Light Factory and checked the Use Lights box. The default for Light Source Naming is Light, and this can be changed if you have several lights in your comp and only want the flare to appear on some of the lights. 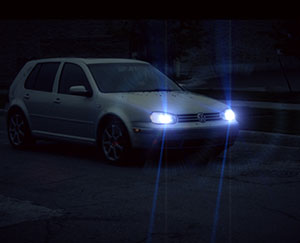 Allows an object to pass in front of the flare. In the example below, a roller skater passes in front of the car headlights and the light dims as she passes. The Obscursation type can range from an Alpha Channel to Luminance Channel to RGB and the inverse and combinations of each of those.

The footage of the skater has an alpha channel so I used Alph for Obscuration Type and chose the Skater footage as the Obscuration Layer. The threshold is how much you want the object obscured and will differ. There is also an option for 3D obscuration, something not all lens flare plug-ins have. 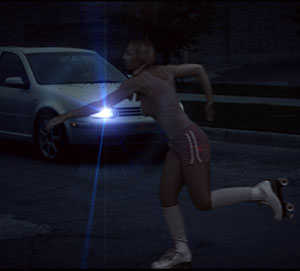 This section affects the full scale, brightness, color and angle of the full flare, not the individual elements, which can be controlled in the Lens Flare Builder. These elements can be keyframed since they exist in the effect controls.

Behaviors allow for looping actions without the need to keyframe. There are options for Blink, Flicker, Pulse, and Strobe. There are options to adjust the Strobe Fade, Flickers per second, Brightness Minimum and Maximum, Cycle Duration and Offset. In the example below, I created the look of police car lights on the VW (suspend your disbelief here. Pretend it’s Austria!)

This creates a mask around the edges of the screen which interact with the flare when used.

UnMult is built right into KLF so the background that the flare is applied to just disappears when UnMult is checked. This is an alternative to using a layer mode such as Lighten or Add. 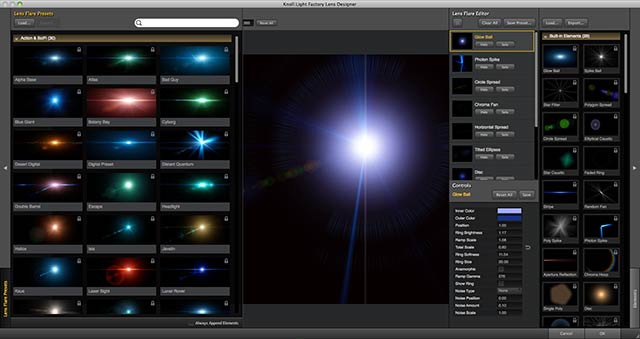 Now we’re getting to the great new part of KLF 3. This area contains presets and a visual interface so that users can see is being created as it’s built. The layout of KLF 3’s Lens Flare Builder is similar to that of Red Giant Magic Bullet Looks. To get to this interface, click the Options link at the top of the Effect Controls.

Tucked away on the left side of the interface are over 100 presets, categorized into Action & SciFi, Cinematic Flares, Distant Flares, Motion Graphics, and Natural Light. The new presets are really nice and range from natural to sci-fi Star Trekky looking and are easily modified. They can look very natural or over the top.

The area in the center of the screen which shows what the flare looks like. Users can click and drag on the image to move the camera to see other angles. Brightness, Scale, Color and other elements can be changed here but it’s just for previewing and does not affect the flare. These are the same settings in the Effect Controls, which can be modified and keyframed.

There are a couple of things I ran into with the Preview area. First, there’s the option of Background – to remove the background in the preview or show other elements in the preview, but I was unable to get it to work. That said, I didn’t spend much time looking for an answer. Another issue I ran into was that the flare would randomly move by itself, usually off-screen, when modifying Controls. I spoke with Harry Frank at Red Giant about this and he said they were aware of the problem and plan to have it fixed in v3.0.1. He also asked me to send him a video capture of the problem, however each time I attempted to do so, it wouldn’t happen. This problem only seemed to happen when I was low on RAM.

On the upper left is the Lens Flare Editor. When a Preset is chosen, all of the bits and pieces will be listed here. There’s an option to Hide the Element or Solo it. New Presets can be saved from this area and elements can be added as well.

Just below the Lens flare Editor are the Controls. When an Element is chosen in the Lens Flare Editor, such as Stripe, the Controls allow for modifying the design. For the Stripe, there are options to modify the Outer Color, Center Color, Position, Brightness, Length, Softness, Angle and more. These elements cannot be keyframed by themselves.

A little bug that I found with the controls that happened intermittently, often while low on RAM, is that the cursor would disappear when modifying controls. It would come back a second or two later when I moved the mouse. Harry Frank told me that this will be fixed in v3.0.1 as well.

Tucked away on the right side of the interface is Elements, which are the pieces and parts of the flare, such as Iris, Poly Spike, Glow Ball and many more. KLF 3 has the most elements of any lens flare plug-in, by far. There are Sprites, Spreads, and Ghosts that you will not see in other plug-ins. This will allow users to come up with endless variations of flares. All of these Elements have several controls that can be modified and they can be combined in the Lens Flare Editor in infinite ways.

One big annoyance with the Elements panel is that it kept popping on and off when my mouse got near it. There needs to be an option to lock it.

The price was cut in half for the latest release of KLF, obviously to stay competitive with their biggest competition, Video Copilot Optical Flares, which I’ll cover in the next installment in this series.

This example has the Light Source Location tied to a track done with Imagineer mocha AE. The flare is applied to a solid layer using the Lighten Mode. Knoll Light Factory does come with an UnMult feature, that, when checked, will remove the background from the layer. Alternately, when the filter is applied to a black Solid Layer, Modes can be used to composite the layer. Adding a lens flare to this footage really gives it some interest.

A short film by Red Giant Software and Seth Worley.

See part 1 of the article: In Depth: Lens Flare Plug-ins for After Effects (Part 1 of 5)