Sometimes using a tripod is not an option and you’re forced to shoot hand-held. Maybe you’re shooting in an amusement park, botanical gardens, or a concert and tripods are not allowed in. Unless you have the ability to stand perfectly still, you will likely need to stabilize the footage in postproduction. Motion stabilization is used to smooth footage and remove camera shake.

Sometimes using a tripod is not an option and you’re forced to shoot hand-held. Maybe you’re shooting in an amusement park, botanical gardens, or a concert and tripods are not allowed in. Unless you have the ability to stand perfectly still, you will likely need to stabilize the footage in post-production. Motion stabilization is used to smooth footage and remove camera shake.

The footage used in some examples in this article were shot on my iPhone 4 in a kayak and it’s all hand-held. I wasn’t about to take a nice camera out on the river, especially since it was my first time kayaking. Not only that, a tripod would not be all that helpful with the movement of the water. Others were shot on iPad, some on Canon 7D and some with other cameras. Most of the footage that I have that needs stabilization was shot handheld and without much planning, so I didn’t have professional equipment around. When customers contact me about stabilizing footage, 99% of the time it is footage that was shot on a camera phone or low-end camera and handheld.

In my book, Plug-in to After Effects: Third Party Plug-in Mastery, I did a big section in Chapter 13, I go into detail on stabilization and the tools in After Effects. This article will be broader, covering several other host applications.

Warp Stabilizer  in Adobe After Effects and Premiere Pro 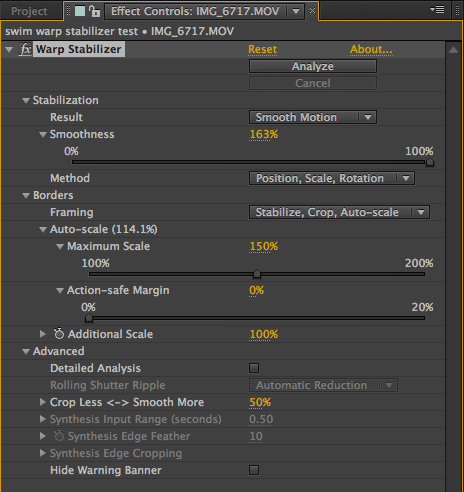 Below is an example of the footage that I shot on a kayak, hand-held, with an iPhone 4. Rolling shutter ripple is a common problem with iPhone and DSLR footage, and I often see it when I pan quickly or when something moves in front of the lens at a rapid rate. This was not too much of an issue here so I didn’t use the Advanced options but I did set Method to Position, Scale, Rotation.

For more information, check out Warp Stabilizer in After Effects CS5.5, CS6 and CC by Todd Kopriva.

Boris Continuum Complete BCC Optical Stabilizer is an extremely easy to use and fast tool for stabilization and I generally got good results, but it does depend on the footage. The plug-in works extremely well with footage with clean lines but not so well on areas with flat sky and water. I, of course, found this out well after I messed with a couple of water/sky shots for three hours, frustrated at the results. This is even in the documentation on the plug-in:

Not all imagery is appropriate for optical stabilization. For example, images with large uniform textures, like ﬁelds of grain, sky, water, or blank walls will not work well with this filter. Images with lots of motion blur or low contrast images may also cause problems. In addition, perspective shifts (for example, a forward dolly shot) or moving foreground objects that dominate the image will not generate optimum results. For best results, your target region should include a fair amount of contrast with good vertical and horizontal edge definition as well as large areas of non-uniform detail, especially edges in various directions. The motion of the clip should only include panning, zooming and rotation. Large background areas with objects moving independently of the background are also suitable.

To get you started, here’s a quick video with a few examples of BCC Optical Stabilizer at work. I had very good results with panning shots (like the balance beam shot) when I had Mode set to Smooth.