In Depth: Waveform Monitor & Vectorscope Plug-ins for After Effects 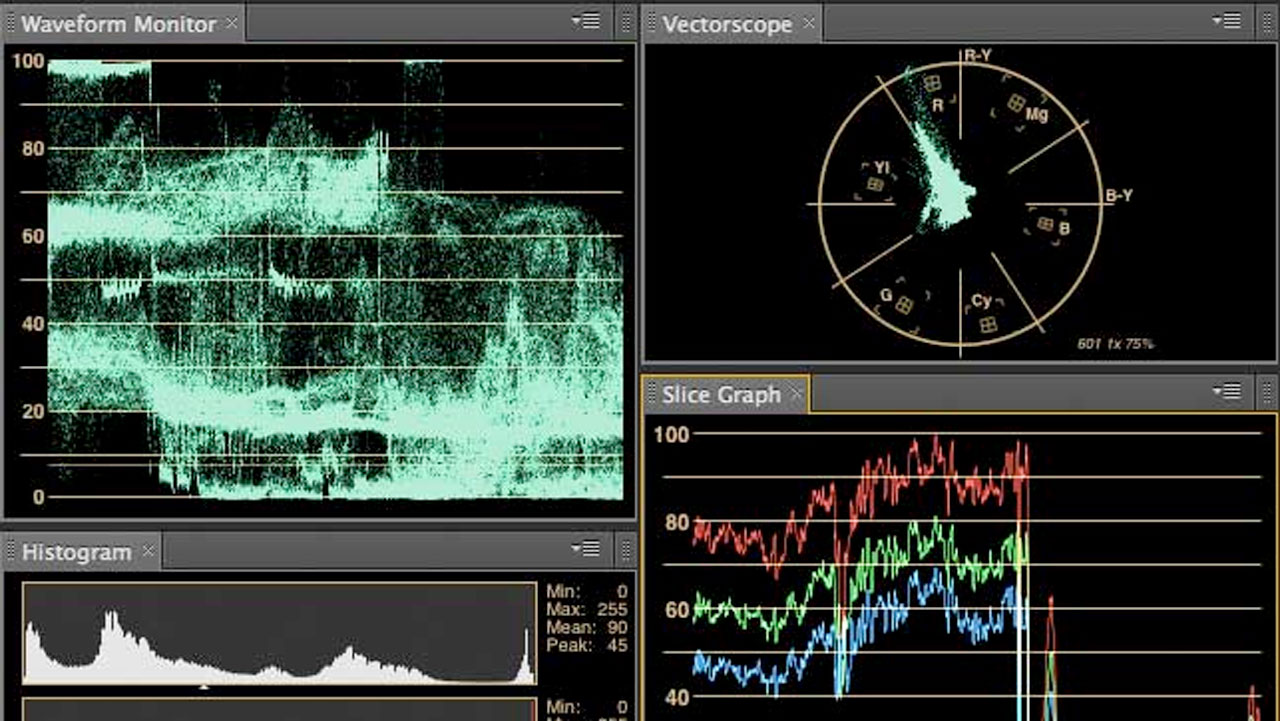 A customer asked: Could you please advise me as to the choices I have for videos scopes, and other means to measure my color and luma levels within After Effect. I want to be assured that I am within legal standards” for broadcast.

Note: This article is in the Toolfarm archive and is, in all probability, behind the times. Videos may no longer show up. Links have not been checked or recently tested for expiration or safety.

Question: Could you please advise me as to the choices I have for videos scopes, and other means to measure my color and luma levels within After Effect. I want to be assured that I am within legal standards” for broadcast.

Answer: Having video levels in a broadcast safe range are so important when working with broadcast video. Back when I worked at Postworks, there was a client who would always want to push the whites a bit whiter and the reds a bit more saturated, into unsafe territory. We warned him but he’s the client, right? I’d see his spots on tv and the buzz in the audio channel from the whites would make me cringe!

In this day and age where we’ve gone from big online edit suites with separate machines for video scopes and waveform monitor to desktop editing systems in a home office, people just don’t want the expense and extra bulky equipment in their workspace. With the workflow that many video editors and artists use, a greener option is to use software scopes. These scopes are just as accurate as their hardware counterparts and they don’t require extra space, electricity or dusting!

So what are the options? For After Effects, you have several. Note: some of the info in this article is taken verbatim from my book, Plug-in to After Effects: Third Party Plug-in Mastery (published June 2011), Chapter 15: Reference and Workflow. The rest is new information from products released after publication.

Product demos can be found at on the Toolfarm demos page. Give them a try and see what you think!

Meta/DMA Scopo Gigio (Toolfarm Price: $125, MSRP: $118) has the same features in hardware vectorscopes and waveform monitors but shows up as a docked or floating palette that can be selected from the Window menu. Scopo Gigio works in NTSC and PAL, and in standard definition or HD. It shows IRE, Volt, and RGB displays. Just view the scopes and if your levels are too high, use Levels, Hue/Saturation or another plug-in to get them into the proper range.

Cons: The panel can’t be resized which can make it difficult to position your layout in AE when Scopo Gigio is docked and working on a small screen. 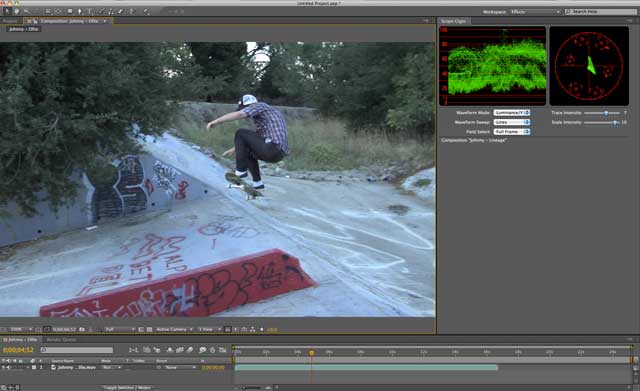 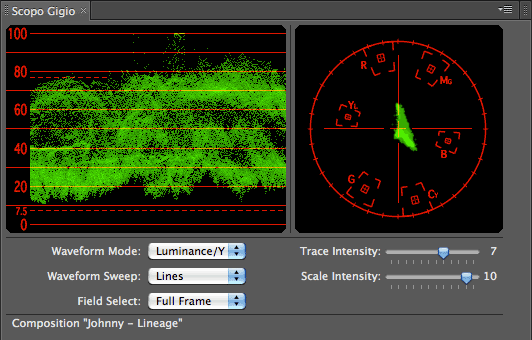 This is a closeup of the Waveform Monitor and Vectorscope panel in Meta/DMA Scopo Gigio.

Pros: The panels can be individually selected under the window menu so the screen won’t get cluttered. The palettes can float or docked into the After Effects interface window or tab together to keep the screen tidy.

Test Gear ships with extremely useful documentation that explains how to use the scopes and monitors with your video. From the guide: “For the waveform monitor displays to be accurate, you must configure Test Gear’s preferences to reflect your video system and the coding used by the image you are analyzing.” Detailed instructions follow on how to set up Test Gear’s preferences. There is also a section at the end of the guide called Understanding Waveform Monitor and Vectorscopes if you are unfamiliar with how to read them and use them or just need a refresher course.

Cons: Lots of palettes… you would not want them all on at once. 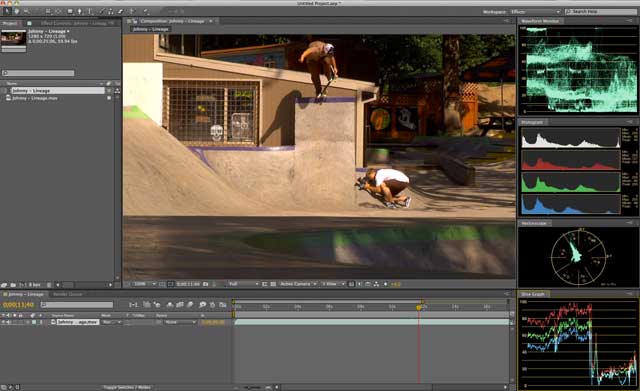 Synthetic Aperture Test Gear with the Waveform Monitor, Histogram, Vectorscope and Slice Graph docked to the right side of the After Effects Interface.

A closeup of the Synthetic Aperture Test Gear scopes. From the top: Waveform Monitor, Histogram, Vectorscope and Slice Graph.

Color Finesse includes several monitoring tools, including a waveform monitor, vectorscope, histogram, and correction curve displays. There is a simplified interface in the Effect Controls panel in After Effect for color adjustments.

Pros: Ships with After Effects, so it’s not an extra expense. Video can be played in full interface. Color correction and scopes are in the same tool. 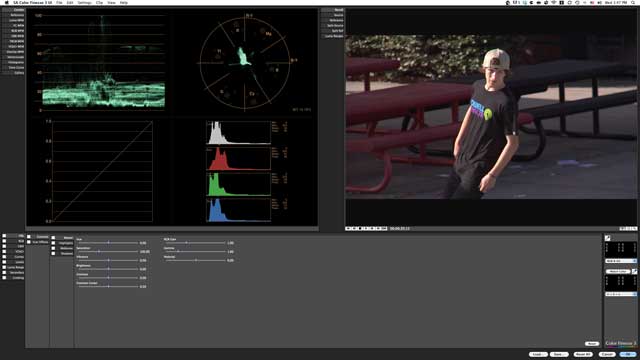 This is the newest vectorscope and waveform monitor plug-in on the scene. Instead of floating or dockable palettes, this plug-in applies the scopes right in the Comp panel.

Pros: There are several layouts that can be used (see images below) so you’ll be able to see your video at the same time as your footage. Users have the option of seeing all scopes on screen at once or seeing the Vectorscope, Luma Waveform, RGB Waveform or YCbCr Waveform on screen alone with the footage.The opacity, display brightness, and Monitor Brightness can be adjusted. If you need to render the scopes with your footage, having the scopes in the Comp panel is a great feature. In fact, each of the scopes can be individually enabled, disabled, resized and positioned anywhere on the screen, either via the effects control panel or via the position points in the comp window at the upper left of each scope monitor.

Cons: Honestly, there are really none. 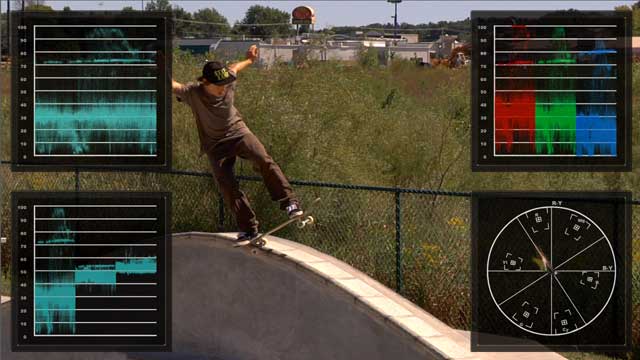 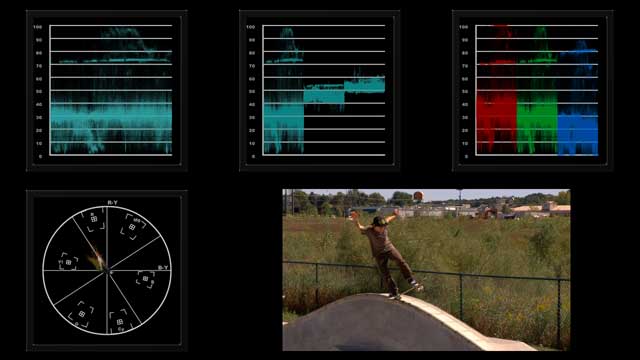 Red Giant Magic Bullet Looks (Toolfarm Price: $359.10, MSRP: $399 – Save 10% at Toolfarm!) also has tools for referencing output levels: an RGB Parade and a Slice Graph. These tools are only for use with Looks but if you apply the effect to an Adjustment Layer and open looks you can view the levels of your current video, then use Looks to bring them into the proper range.

To turn on the Graphs in Magic Bullet Looks, click the Graphs: On button in the upper right corner of the Looks interface. RGB Parade and Slice Graph are tabbed so that users can toggle between them.

Pros: Magic Bullet is a great tool for adding filmic color and toning effects to the footage. The scopes can show the data from the original footage or the current Look that is applied.

Cons: Must leave After Effects interface to use the effect and see the scopes. The interface does not support moving footage at this time so the user will see whatever frame he is on in the timeline displayed inside the Looks interface. 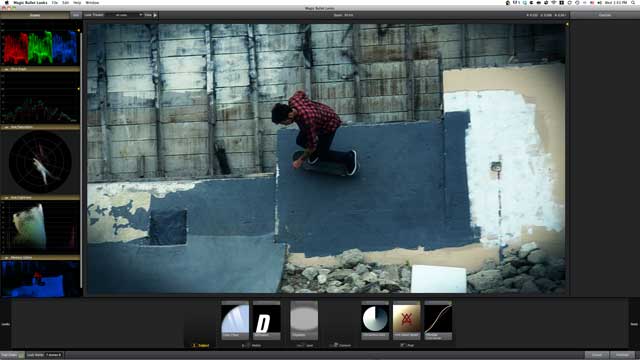 The Magic Bullet Looks interface with the scopes on the left side of the screen.

A closeup of the available scopes in Magic Bullet Looks.

Which is most recommended?

This is a toss-up between Boris Continuum Complete Videoscopes, which is conveniently right on the screen and Synthetic Aperture Test Gear, which has so many available scopes which are dockable. Synthetic Aperture Color Finesse is also a sound choice and it ships with After Effects, which is a bonus. We recommend trying some demos and seeing which works best with your workflow. Again, product demos can be found at on the Toolfarm demos page.