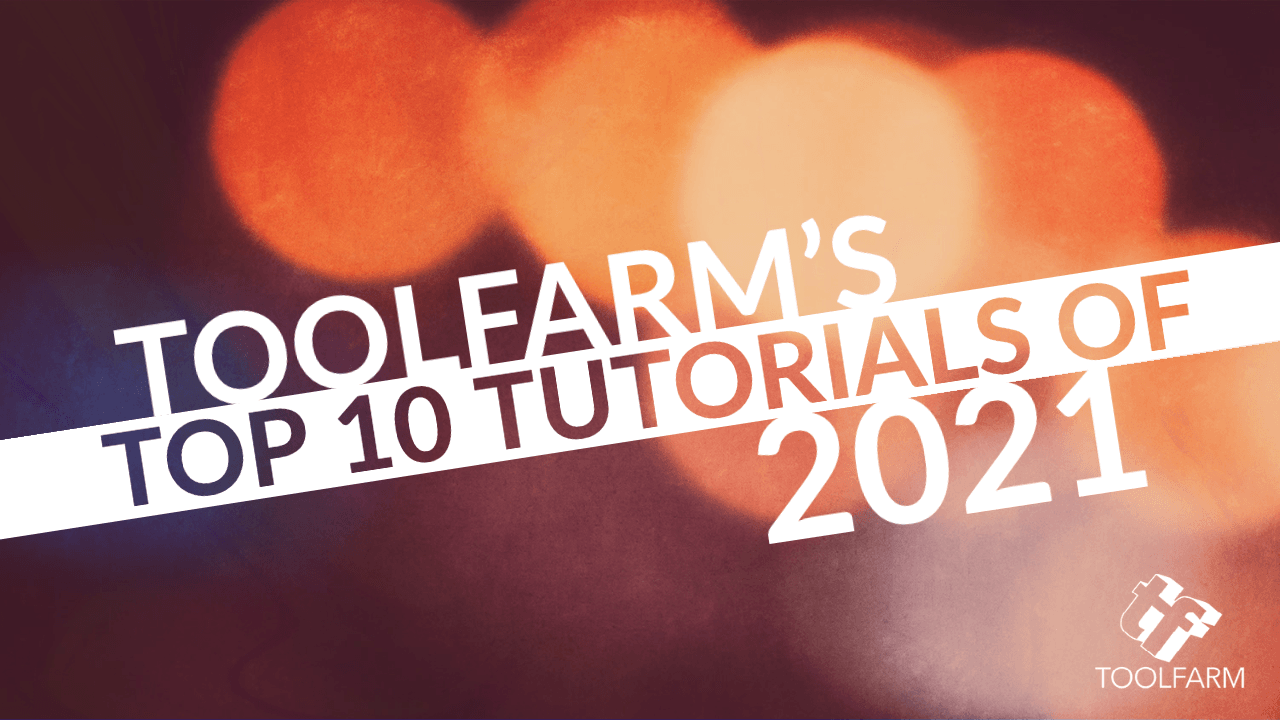 It’s that time of year again… time for the Top 10 Tutorials of 2021! First, I want to thank you for visiting Toolfarm and supporting our company. We are a small business with a fairly large online footprint and we do our best to create content and support the products we sell every day. Thank you for your business in 2021!

Without further ado, here’s a rundown of our most popular tutorials from the year. Enjoy!

10: In Depth: The Ultimate Guide to Building a Great Demo Reel

Building your first demo reel can be daunting. Heck, it’s difficult for people who have a decade or two in the business!

In this article, get advice from seasoned pros on putting together a reel that will get you jobs! Learn what work to include on your reel, music choices, etc.

9. Reset PSR: How to Center any Object in Cinema 4D

This is an older tutorial that has popped up in our top 10 for the last couple of years. A lot of people must find it useful!

Learn to center any object in Cinema 4D with Reset PSR, hidden by default. It’s now called Reset Transformations in Cinema 4D R25, and we’ve updated the page with a new screenshot.

8. How do I Use Scopes in DaVinci Resolve?

Scopes are a crucial tool for editors for consistent color correction, for giving skin tones natural color, and for fixing the white balance of footage. It’s not difficult to learn to use scopes either, whether it’s Waveform scopes, Luma, YC, and RGB Parade, the Vectorscopes, or the Histogram. Although this series is focused on DaVinci Resolve, much of these tutorials are applicable to scopes in any video software or hardware.. Learn to read these scopes. In other words, stop the guesstimating!

7. Burning Question: What in the heck is OFX?

OpenFX, or OFX, plugins are exploding on the market with hosts like DaVinci Resolve, Vegas, Flame, Baselight, and others. Learn about where it came from and what hosts and plugins use the OFX Standard.

The idea of network rendering is to distribute your render over a network, or farm, of computers, to speed up your render times. Learn how to set up a render farm in After Effects, using RenderGarden and other tools. We also look at Team Render for Cinema 4D, Chaos V-Ray Swarm, and a few other tools.

5. Burning Question: How Do I Remove Flicker from my Footage?

Flicker, brightness fluctuation, and strobing is really annoying problem in video. It occurs when the frequency of the lights and your camera’s shutter speed don’t jive. You might get strobing or rolling bands when shooting under fluorescent lights. You’ll also get strobing bands when filming a video or computer screen. If you’ve done any film restoration, you’ll see flicker there as well. In addition, it can rear its ugly head when shooting time-lapse footage.

4. Setting up a Render Farm in Cinema 4D with Team Render

Who wants to render faster? Everyone!! We’ve covered this topic a bit before but with Team Render for Cinema 4D, you can set up a render farm quickly and easily. Here are a couple of tutorials from Maxon
and Greyscalegorilla.

Team Render replaced Net Render in R15 and it’s fully integrated into Cinema 4D very easy to set up. “It allows distribution of frames for animation and buckets for still images to multiple computers on the network.” – Maxon.

This article was originally published in 2017 but updated in 2020.

Upscaling means stretching a smaller video to fit a larger screen. The goal is to increase the size of the video while maintaining quality. Other terms you may hear are upsizing and uprezzing. Sure, you can simply scale the footage, but you will often get stretched and blurry results. You can also upscale with software and plugins that have features to sharpen and clean up problems including blur, jagginess, color artifacting, and noise. This article covers the tools to upscale your footage with great results.

There are so many renderers available out there, and how does an artist know what to choose? Essentially, renderers really do the same thing. However, they work differently will give different results. This article is, essentially, a breakdown of what the different renderers offer, not reviews, so you can decide which renderer is right for you. It has been kept up with each update of each 3D renderer as well, making it a great place to start if you’re making a decision.

This article is updated monthly, so the information is fresh!

Okay, the moment you’ve been waiting for. Heck, you may have just scrolled down to the bottom of the page! This one is new to the list. Resolve has gotten very popular!

1.In Depth: DaVinci Resolve Studio vs. The Free version