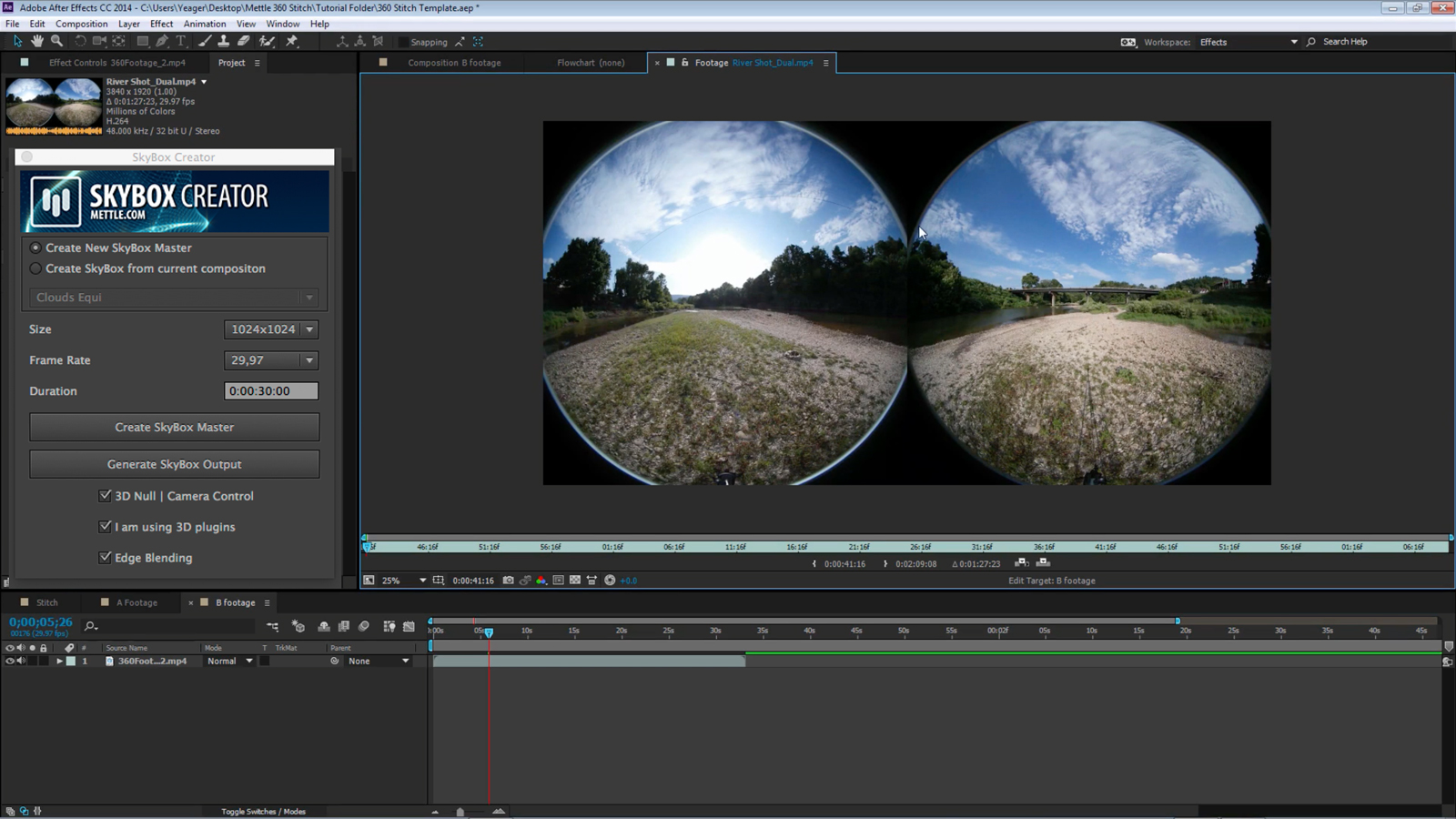 After seeing all of the 360/VR at NAB in April, VR is still hot! Here are a few tutorials and resources for working in VR in Premiere Pro, After Effects, and other hosts.

Mettle SkyBox is a highly regarded and powerful tool for working with 360 VR content. In this video, Charles Yeager (yeagerfilm.com) shows users how to stitch Samsung Gear 360° footage in After Effects using the SkyBox Studio 360/VR plugin. Samsung Gear VR 360° footage is shot with 2 Fisheye lenses at (3840 x 1920), 30 fps, and there is only one stitch line to deal with where the two lenses overlap. This technique works with any 360° footage that is shot with 2 lenses, such as the Ricoh Theta, Kodak Pixpro, Nikon KeyMission 360, and LG 360.

You can download the free project file, courtesy Mikey Borup of After Effects with Mikey, from his original Vimeo post.

If your motion 360° footage appears jumpy and warped in a VR headset, you may need to “stabilize the horizon” to keep your audience from getting motion sickness. mocha Pro specialist Mary Poplin shows Adobe CC users how to stabilize the horizon in After Effects & Premiere Pro with mocha’s powerful planar tracker and Dashwood 360VR Toolbox.

Dashwood 360VR Toolbox – First previewed at NAB 2015 in April, 360VR Toolbox literally turned heads with its ability to preview 360-degree spherical footage in the Oculus® Rift, while playing from an edited sequence in Apple Final Cut Pro, Adobe Premiere Pro or Adobe After Effects. The latest patent-pending features have now been revealed in the public beta of 360VR Toolbox. These include full stereoscopic 3D support, reorientation of equirectangular “LatLong” panoramic footage, output of “pan and scan” mono or stereoscopic video, placement of 2D elements inside spherical footage, support for equirectangular, stereographic or cubic projections, and “seamless” 360 degree filters like blur, sharpen, glow and noise reduction.

Note: Tim Dashwood was hired by Apple and now all of his products are free. Learn more.

Studio 360 VR has been posting lots of tutorials on working with 360 VR content. If you’re just getting into VR, this is a great resource for you. If you’re a Premiere Pro user and working with VR footage, you can easily get your front lens and rear lens confused. Marcelo Lewin explains it very clearly.