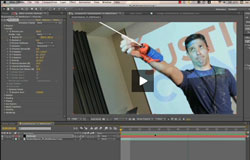 In this episode of Red Giant TV, director Seth Worley shows you how to create a Spider-Man Web-Slinging Effect with Trapcode Particular.

Seth Worley has just released a new tutorial at Red Giant’s website where he creates a shooting web from Spiderman using After Effects and Trapcode Particular. He uses Primatte Keyer to key the actor as he swings across the room, and he finishes off the sequence by color grading with Magic Bullet Looks.