Model your vision down to the last detail 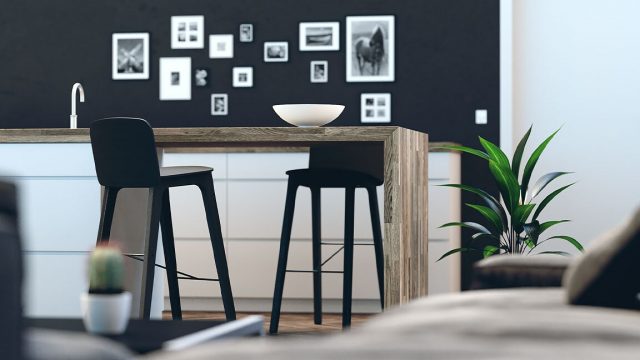 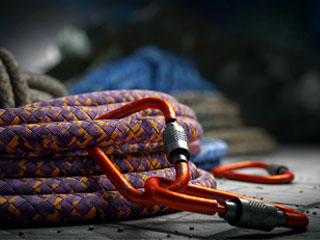 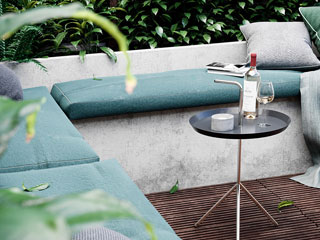 Create or use pre-existing procedural OSL maps with any supported renderer. 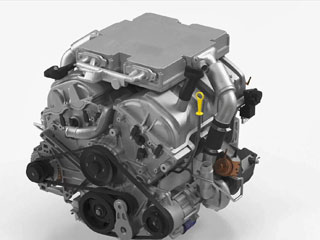 Built-in weighted normal calculator that can be directly applied to 3D models allowing you to create precise designs. 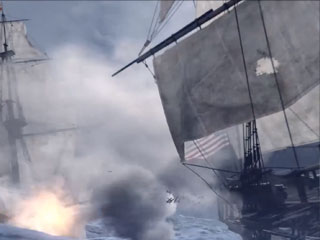 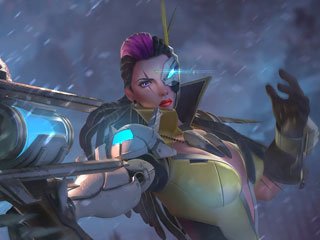 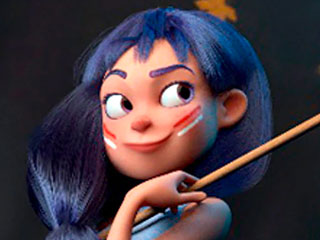 Use keyframe and procedural animation tools and also view and edit animation trajectories directly in the viewport.

Preview and adjust animation paths directly in the viewport. 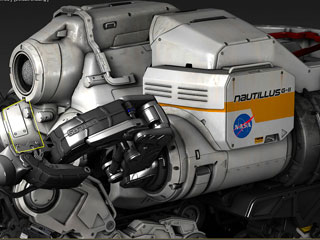 As part of our OSL integration, you can display procedural maps created with OSL at 1:1 quality using Nitrous viewport. 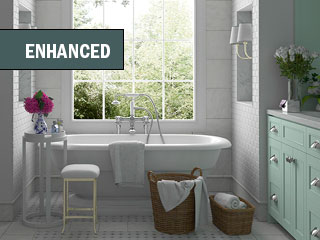 Use Arnold GPU Renderer to view scene changes in real-time, including lighting, materials, and camera. 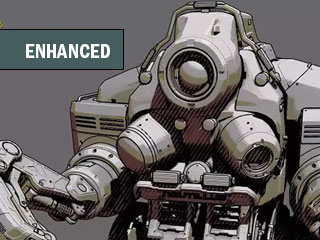 An interactive rendering experience that allows you to see your scene in a near-final rendering quality as you’re working.

Leverage the power of 3ds Max for automation by using 3ds Max as a true command-line tool.

Seamlessly and consistently change materials, lights, cameras, renderers from one to another.

Create your own custom workspaces with a more modern, responsive, high-DPI-ready user interface.

Automatically populate parametrically generated details such as animated vehicles to scale with your environment.

Share models and review feedback online with the Autodesk Viewer directly from the 3ds Max interface.

Bring to life fine-tuned touches such as materials, lighting, and textures for photorealistic imagery.

Import your CAD and BIM files and use it to create a general structure and enhance the details of your 3D design.

Simulate artificial lighting sources to accurately portray how light and shadows will interact with your designs.

See and make changes in your scene in near-final rendering quality in the render frame window while you work.

Advanced tools give you the built-in rendering power to create the highest quality photo-real visualizations.

Quickly iterate and see near-final quality renders of your game assets right in the viewport.

Get tighter pipeline integration with support for Python 3.

Over 55 user-reported defects fixed, including:

Animation and performance
Performance has been notably improved in creating keys, Trackview, Slate UI, and file reset.”Average weights” has been renamed to “Normalize weights.” List controller evaluation is now just as fast regardless of whether the “Average Weight” option (now “Normalize weights”) is on or off.

Viewport
Image based lighting (IBL) is now automatic when an environment is added to the scene; you no longer need to add a skylight. The Physical material’s roughness parameter is now supported in the viewport’s Realistic mode. Shadows have been improved and are now supported in the default lighting mode.

You can now easily customize, merge, and visualize shortcuts keys with a new hotkey system and enhance your workspace experience by extending your viewports across various monitors.

Plus, building upon the feedback we received on the 2020 chamfer modifier updates, we have polished and provided an additional update to bring you a more predictable modeling tool.

With the new improvements to ActiveShade, you can now interact and render simultaneously in the same viewport.
The ActiveShade viewport mode extends your rendering workflow so you can now see the final result of your adjustments as you make them.

You no longer need to upgrade your file when importing a Revit 2018 file, provided you have 3ds Max 2018 and Revit Interoperability for 3ds Max installed.

MAXX:Animation, MAXX:ParticleFlow
Fixed an issue where Particle View would not display the Depot or node graph. The workaround is no longer needed. MAXX-37366

MAXX:Cloud
In Shared Views, texture maps on objects could be wrong if 3ds Max files contained images with the same name but a different folder path. Only the first one found was being used. MAXX-45036

ython
Fixed a problem with pyside2 error reporting (traceback) when passing in a functools.partial object into a slot for a QSignal. MAXX-45210

When using an OSL Map, it would cause network rendering errors. MAXX-45619

Open standards Alembic & OSL Improvements
Alembic support has been updated to version 1.7.5, with this comes with improvements to export and speed.

New Subscription Benefits – Autodesk Drive
Autodesk Drive is a cloud storage solution that allows you to securely store, preview, and share  your 2D and 3D design data. It supports 60+ types of Autodesk and 3rd party files for viewing and organizing, preserving your local storage where you only download when you need to. More on Autodesk Drive Here

Community Updates
Autodesk is committed to responding quickly to 3ds Max user feedback. That’s why this release includes over 70 fixes, many of which were submitted by the 3ds Max user community at 3dsmaxfeedback.autodesk.com.

As a standard exchange format, Alembic is used to interop across different DCCs. As such, we have made several improvements:

We are committed to responding quickly to 3ds Max user feedback. That’s why this release includes over 80 fixes, some of which were submitted by you – the 3ds Max user community – at 3dsmaxfeedback.autodesk.com.

3ds Max® 2019 introduces new features that speed the creation of intricate 3D scenes, and faster workflows that make it easier to collaborate on and execute complex projects.

The idea of network rendering is to distribute your render over a network, or farm, of computers, to speed up your render times.

This new tutorial from 3d-io Plug-ins goes over all aspects of multiple objects or full scene texture baking using Flatiron for 3ds Max.

Learn how to set up your renders with the optimal settings for 360° video with 3ds Max and V-Ray. There are two tutorials for reference.

This tutorial for the Thanos Portal comes from SitniSati, and is, of course, inspired by the Avengers Infinity War. Watch it now!

This week, we're showing the most recent Autodesk 2019 M&E Showreel, instead of the usual tutorial or Maya feature walkthrough.

Will Gibbons, Luxion's Global Training Specialist, goes over everything you need to know about creating interactive visuals with KeyShotXR.

Burning Question: Greeble... What is it and how to make your own.

A greeble is really all about faking out your audience! It's the small details that make something appear to be more complex than it actually is.

Creating a Snow Shader with Redshift and Autodesk 3ds Max

With the hot weather in the northern hemisphere this week, cook down mentally with this free lesson from Proteus VFX school on creating a procedural snow shader with Redshift and 3ds Max. Heck, you could make yourself a snow cone!

This tutorial will teach you how to use Thinkinteic Pulldownit, the shatter and destruction plugin for 3ds Max, to smash through a billboard with an animated car.

We get asked all the time if we think that VR and 360° immersive video is something that is just a novelty or if it is an important technology. Plus, I’ll go over some of the 360° VR tools available for your favorite NLEs, 3D programs, and more to help you get started in VR.

In this tutorial, Tony from NXVisual Studio shows you just how easy it is to create highly polished animated graphic design elements using 3DS Max and HitFilm Pro 2017.

Character Animation: Adding Weight and Life to a Character’s Legs in 3ds Max

Jonathan Abenhaim explains how to mimic the subtle vibrations of the leg when the foot comes in contact with a hard surface.

In this tutorial, from Mograph Plus, you will learn how to render realistic explosions and smoke in Arnold for 3ds Max using the Arnold Volume.

3ds Max: How to Create a Mini 3D House in 3D Studio Max

Learn how to make a miniature, low poly house using 3ds Max in this step by step tutorial by Jonathan Lam.  This tutorial is great the for beginning 3ds max user as it covers creating simple 3D shapes and basic modeling techniques.

This step by step tutorial teaches you how to use Forest Pack’s “Forest Color” map features plus a bit of customizing, to create macro-photorealistic sand.

The visco elasticity solver in thinkingParticles for 3ds Max allows for the creation of viscous liquids like honey or oil, or any kind of thick fluids. Learn how to use the solver to create flowing honey in this tutorial.

Autodesk visits Jacques Choi of Eidos-Montreal, who shares some great tips on how to smooth your workflow in 3ds Max when Hard-Surface Modeling.

The latest release of RayFire for 3ds Max brings the RayFire Shatter Modifier, a new tetrahedron based damaging and fragmentation modifier.

In this video render spaz explains subsurface scattering settings using IRAY renderer to get realistic results when applying this material to a scene of raspberries.

Multi Pass Rendering and Compositing in 3ds Max and After Effects

Learn how to create a basic scene in 3d Studio Max with part 1 of a 2 part tutorial series from Envato Tuts+.

Vikrant Dalai explains how to make a fireball with a smoke trail for use in your space war film, video game or dinosaur extinction recreation documentary.Vikrant says: "In this tutorial, I'll show you how I created this fireball with the help of 3ds Max and the FumeFX Plugin. There are different types of techniques we can use to make this effect in FumeFX - e.g. Simple Sources, Object Sources, Particle Sources, etc. But this time we will use a Simple Source. And for this purpose we are going to use three different Simple Sources, some standard lights (Target Spot & Omni), and the default Scanline Renderer."

Post by Vikrant Dalal at CGtuts+ - Create an smoky ghostlike character or object using Sitni Sati FumeFX for 3ds Max and Krakatoa. He finishes in After Effects. Project file with a sample character is included.

3.5 hours of free explosion basics tutorials for 3ds Max / Sitni Sati FumeFX, plus tips and techniques, “anatomy of an explosion”.