Add people and crowds with facial gestures and clothing movements to your CG scenes!

The new 4D Digital Humans are able to preserve every detail of the clothing and offer impressive facial animations. In addition, with the Ambient 3D characters you can populate the middle and front planes of a scene increasing the realism. 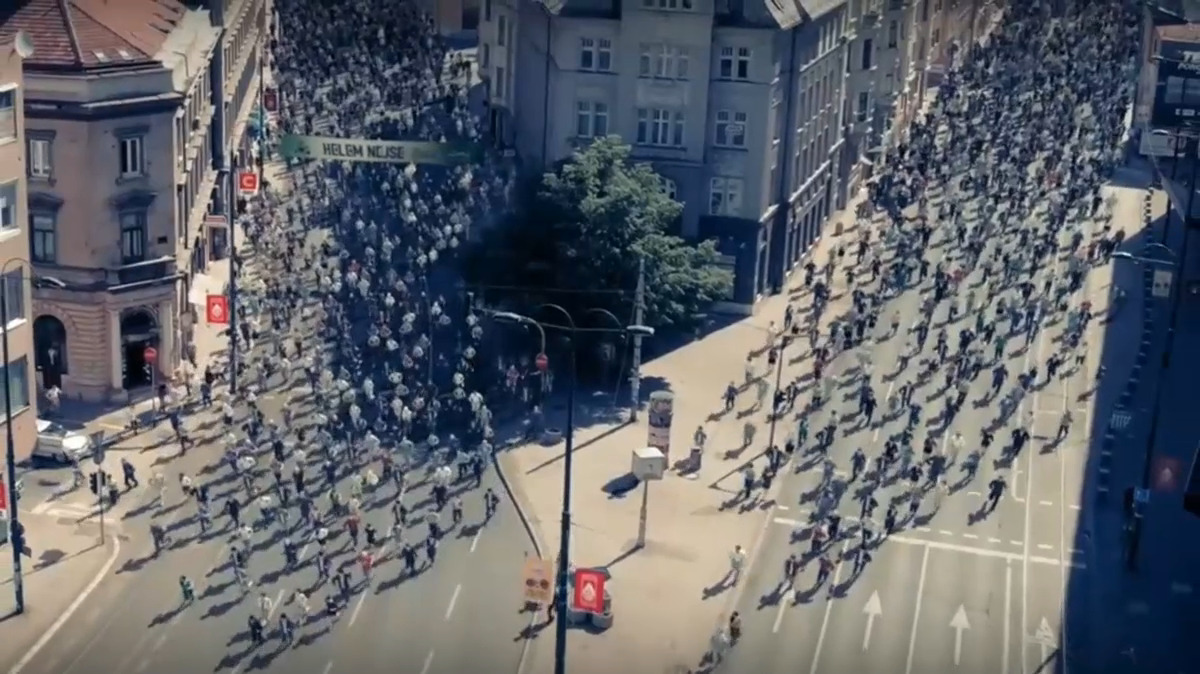 anima® uses the same high-quality 3D people found in our metropoly® collections, so there’s no need to compromise on quality. Our actors are driven by real mocap data and a sophisticated AI engine with an automatic procedural motion to achieve super-realistic crowd animations. 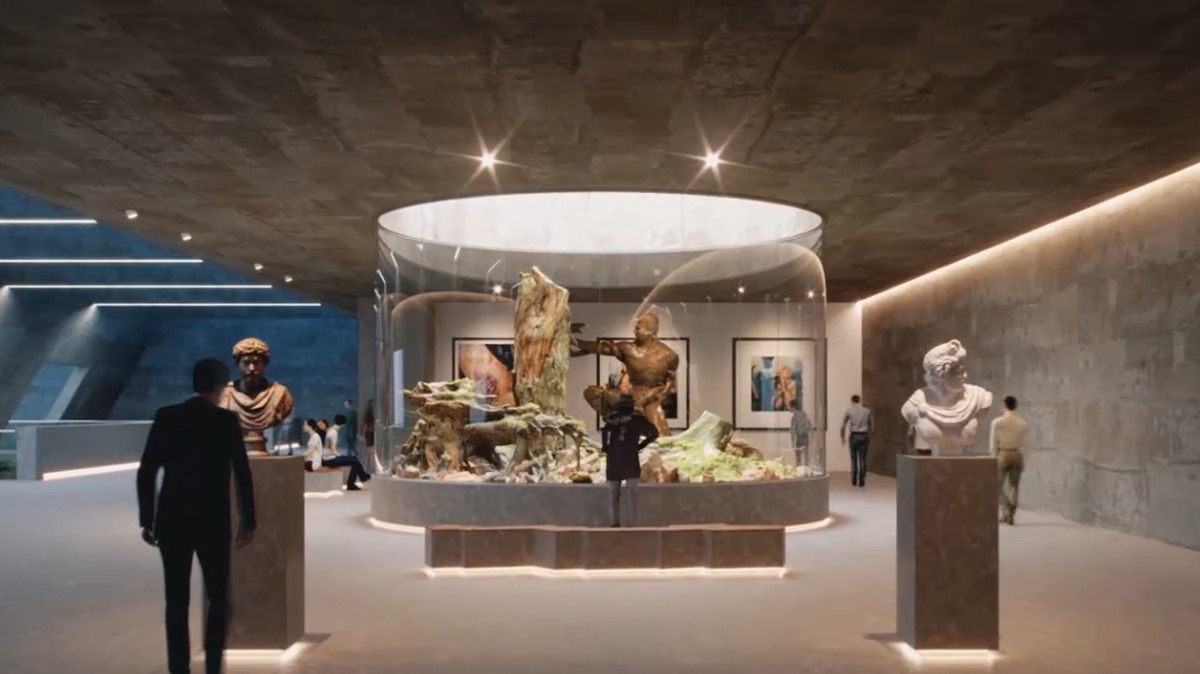 Add life to your Archviz or any other visualization project! anima® brings up a toolset to easily populate your still renderings and animation videos using our 3D Scanned Metropoly® Ready-Posed and Metropoly® Rigged 3D Human models. 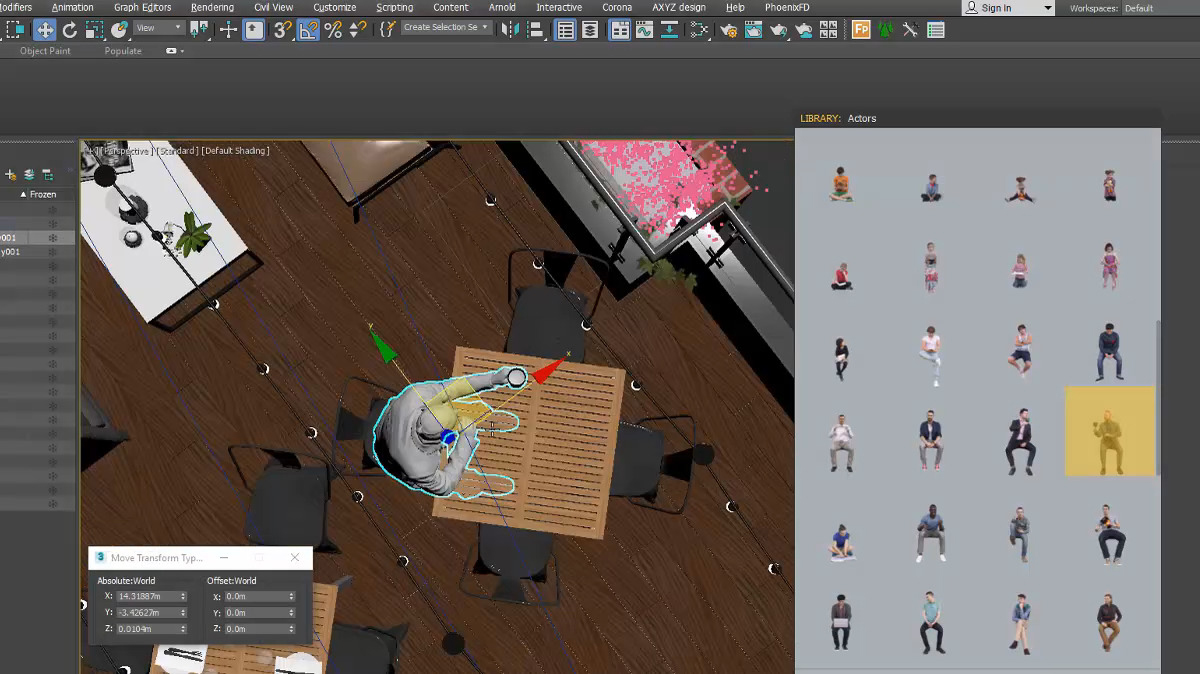 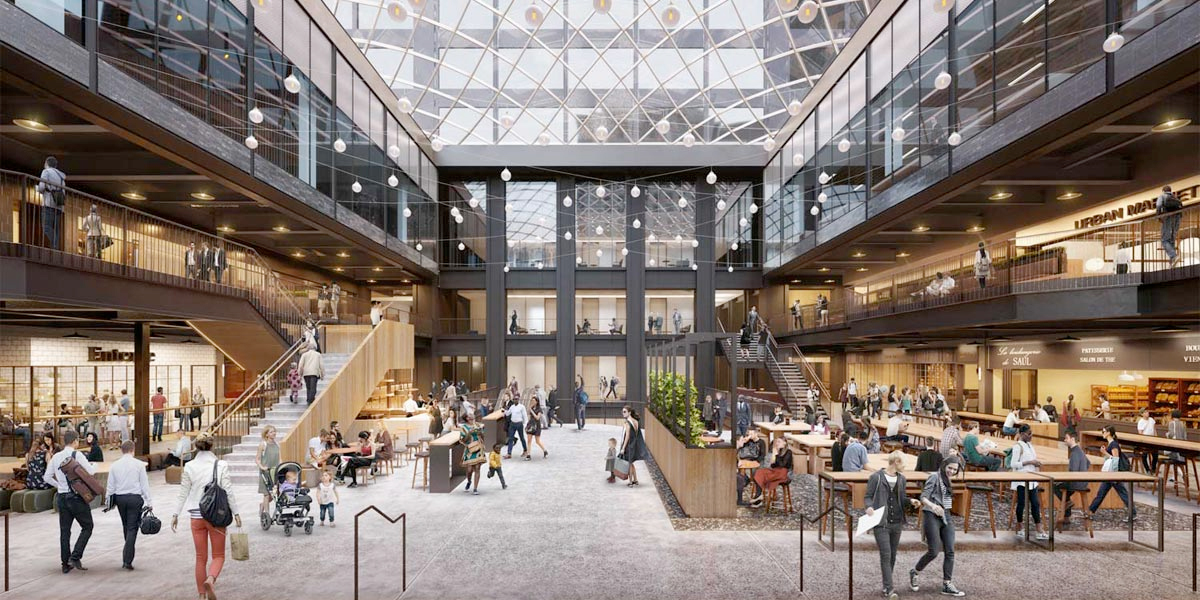 With its easy-to-use motion editing tools, anima® enables you to create actors that walk, run, navigate slopes, ride escalators, tackle moving walkways and climb stairs realistically. Indeed, whatever your scene’s topology, you can add crowd-animated characters that explore every corner. 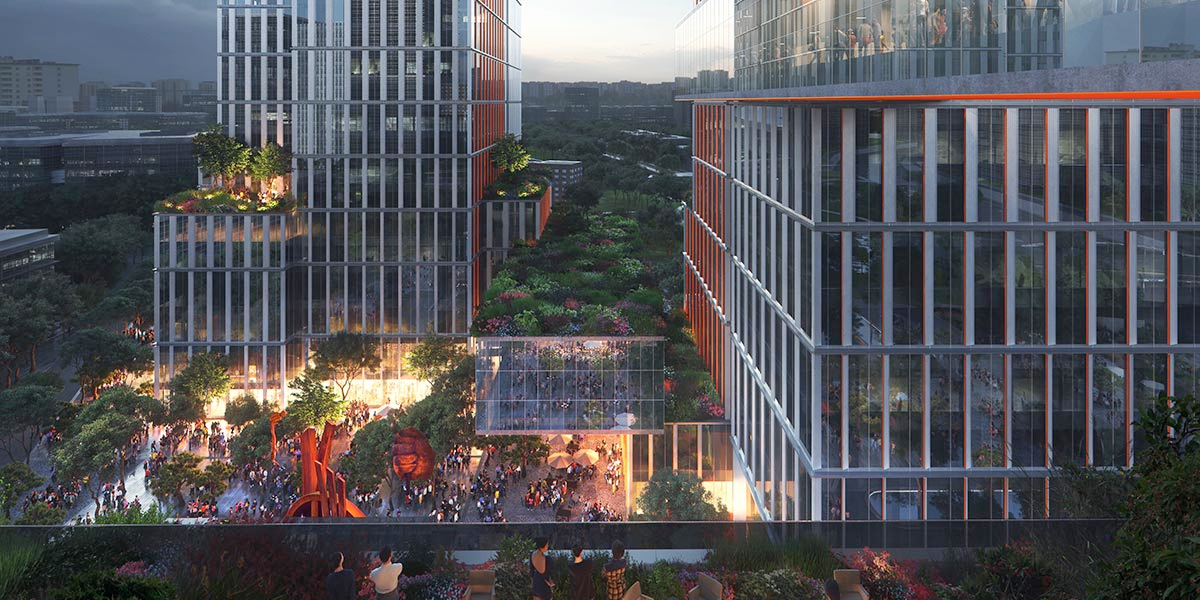 Thanks to anima’s adaptive placement, area, and walkway tools, crowd actors can walk, run and stand on nearly any surface. Just define an area and the actors are projected onto the background geometry. Press play and animations adapt automatically to the terrain for flawless integration. 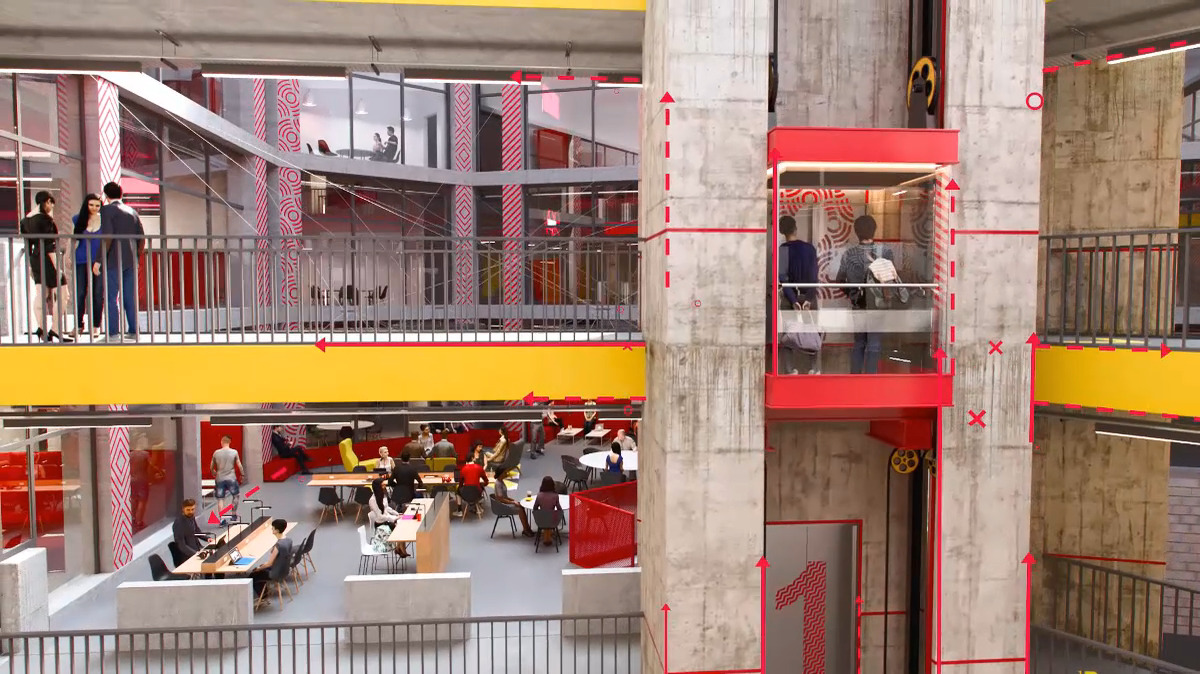 Fill scenes with standing and seated characters using an extensive range of animations, or import more from 3rd party sources. Characters can move from walkways to fixed areas to socialize. 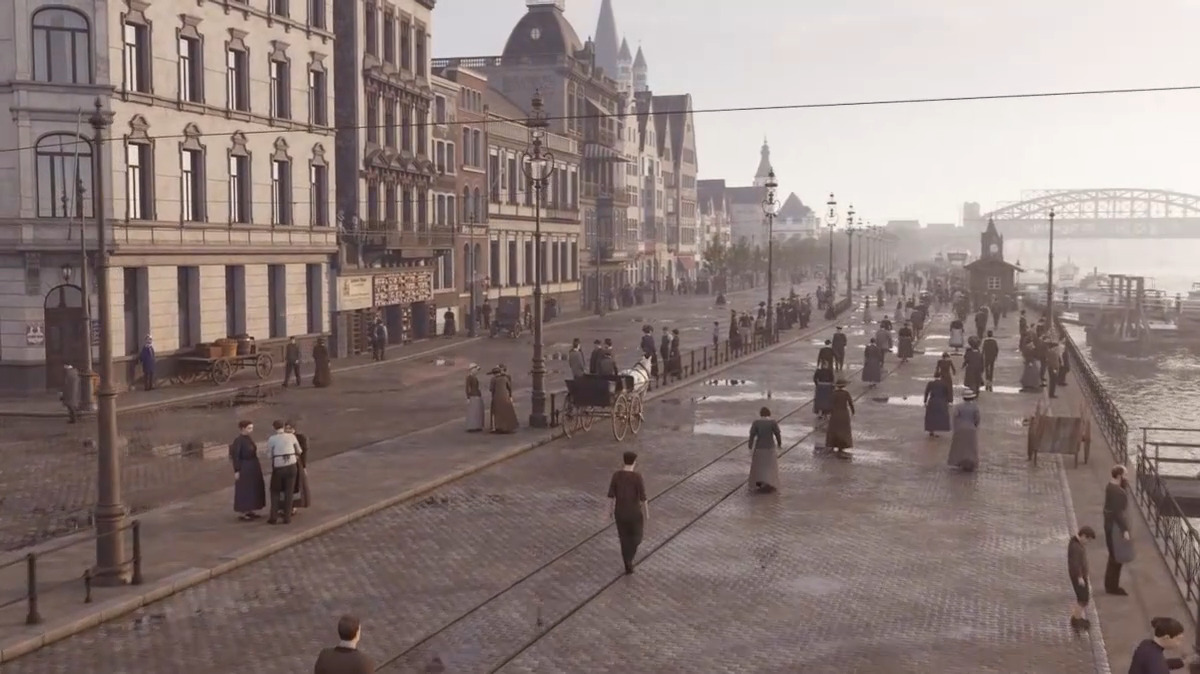 Your Own Characters and Motions

Work seamlessly with your favorite 3D modeling and rendering tool within a few clicks. Our native plugins will import, manage and optimize textures and meshes. At the same time, apply ready-to-render materials in just seconds!

Import sophisticated and complex crowd animations with ease in your favorite 3D modeling through FBX, OpenCollada, or V-Ray Scene formats with our built-in exporter!

Create mind-blowing unreal immersive experiences populated with realistic animated characters and discover human scale perception as you never did before!

Define walking surfaces, obstacles, and collision geometries for your simulation directly in 3ds Max®, Maya® or Cinema 4D® and send them to anima® within a click while working and refining your visualization project animations!

Through a solid live linking, anima® alive™ will automatically keep projects, geometries, and cameras synchronized with 3ds Max®, Maya®, and Cinema 4D® for a quick smooth workflow and perfect control of your crowd simulations and character placement.

anima® will convert and optimize Metropoly® Rigged, Ready-Posed, or any third party 3D people model to output realistic images or animations using the most advanced renderers in the industry such as V-Ray, Corona, Octane, Arnold, Maxwell, and more! 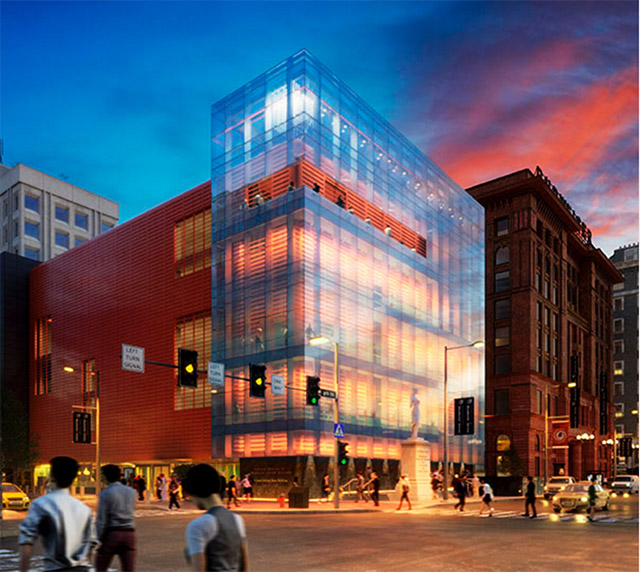 Our software has been designed to run on a wide range of hardware and software configurations, although performance levels will vary depending on the processing speed, graphics card, and memory of the system. Below you can see a list of the minimum and recommended specifications:

In case you have any doubts, we highly recommend you to download and try out the free LITE version. You can use the FREE version anima® Lite to create still renderings and animations, even commercially. It has no limits if you only use our metropoly® Ready-Posed assets (static).

The PRO version removes all limitations on all the types of models available in the metropoly® library (Ready-Posed, Ambient, Rigged, and 4D Digital Humans).

▪ Fixed an issue where the last modified time of a scene would not be updated correctly when using anima alive, leading to an incorrect warning on the plugins.

▪ Multiple improvements have been made to the Quick Drop panel to provide a better and more stable experience when using it.
▪ Fixed an issue where the models from the subscription were not visible in production renders when using Redshift.

▪ A new option for displaying all actors as full meshes instead of arrows is now available.

This update includes a whole host of new features related to 4D playback. Several improvements have been made to anima to handle many more 4D actors than what was previously possible. The biggest improvement comes from the addition of GPU video decoding for those with compatible NVIDIA GPUs.

anima®: The biggest improvement comes from the addition of GPU video decoding for those with compatible NVIDIA GPUs. In supported systems, a new option will be visible from the preferences panel to choose between CPU or GPU video decoding. Choosing GPU decoding will give significant performance improvements when playing back 4D actors in the anima viewport while reducing CPU usage overall. Many other tweaks have also been implemented to handle larger amounts of 4D actors in the viewport at the same time without the need to turn them into boxes. If you want to try this out, make sure to increase the previous limit of visible 4D actors in the viewport’s graphics panel. A new LOD has also been implemented to improve playback from very far distances, which will be automatically applied when updating the 4D assets to their newer version.
anima: Simulation performance has been improved on scenes with large backgrounds. The internal collision tree has also been made more efficient, resulting in both a speed increase and a file size reduction for any anima project.

metropoly®: The whole collection of 4D actors has been reprocessed to give a higher and more consistent level of quality. These assets are backward compatible with previous versions of anima, but most of their performance improvements will be available when updating anima to 4.1.0. The most notable change will be that the texture quality of these actors when being rendered by the anima Plugin will be higher than the current version.

Unreal Engine 4® Plugin: This update also includes many optimizations to the Unreal Engine 4 plugin, making real-time playback of anima projects much more viable. First, LODs are now generated for all characters, resulting in many performance improvements when looking at large crowds of characters from a distance. Second, we’ve added direct transfer capabilities when using GPU decoding for the playback of 4D actors, resulting in some really big increases in real-time performance. For example, internal benchmarks have shown that scenes with up to 20 4D actors can go from around 20 FPS to 160 FPS in a system using a single GTX 1080, making these projects much more viable for projects that require high refresh rates. These performance improvements are available when using the D3D11 or D3D12 RHI. The Vulkan RHI will also have performance improvements, but no direct transfer is available at the moment. We encourage you to give this update a try if you were interested in having 4D actors in real-time scenarios.

The world of crowd simulation has been given new life with the release of anima 4.0. This is a major step towards a new way of creating even more realistic and life-like experiences. The software has been greatly improved since version 3.5 to be the best and fastest option on the market that focuses on a single goal: no fancy features, simpler and more consistent workflow, and at the same time affordable. To achieve this, a new and innovative way of capturing real people in motion has been designed, supported by our new technology for lossless 4D animation data compression.  A great effort has also been made to improve the overall usability of anima by making it even more compatible with industry standards.

Since anima came to the market in June 2016, it has been acclaimed as the best solution for quickly and easily creating stunning 3D animations in very little time. It was the first Archviz population tool to help architects, designers, and 3D professionals bring hundreds of realistic 3D characters into their scenes.  Now also several VFX companies also use it for set-extension shots because of its simplicity slashes production times.  We provide connection plugins for Epic Unreal Engine, Autodesk 3ds Max, Maxon Cinema 4D and now, since this 4th version, we introduce also a brand new plugin for Autodesk Maya®.

In this new version, we introduce several new features related to user content management and library performance, and also our 2 new types of actors: 4D Digital Humans and Ambient.

The update can be downloaded directly from the AXYZ design website or through the automatic software updater.

Having a great workflow between anima and the other content creation tools has always been our main goal. 3ds Max, Cinema 4D, and Unreal Engine are some of the industry-standard CG software that is already available for seamless integration with anima. Not to mention that it is compatible with several rendering engines such as V-Ray, Corona, Redshift, Octane, Arnold and more.

To continue improving our availability, we introduce a new plugin for Maya. This new addition allows anima® to reach the VFX industry to help in the highly demanded generation of set-extensions, thanks to the tools we provide to quickly populate extensive backgrounds of virtual environments.

Updates and upgrades are free within a year from the license activation.  Get the Update

(*) All the updates and upgrades are free within a year from the license activation.