Bang is a modular, fully procedural 3D muzzle flash plugin for After Effects

Bang is an After Effects plugin that lets you easily add realistic and stylised muzzle flashes directly to your footage. Its 3D particle system renders unique flashes viewable from any angle, taking into account After Effects’ comp cameras.

Bang is a modular plugin allowing up to four different flash types and sixteen flash instances per layer, and includes the Bang Relighter module for simulating illumination of your actors and surroundings.

Create any flash shape with the Flash Shape Profile Editor; move points around, add new ones, or delete points to set your base shape, then play with the energy and randomness properties to fine tune the overall look. You can also add petals to simulate the star shaped flashes common on assualt rifles and machine guns, and sparks too! 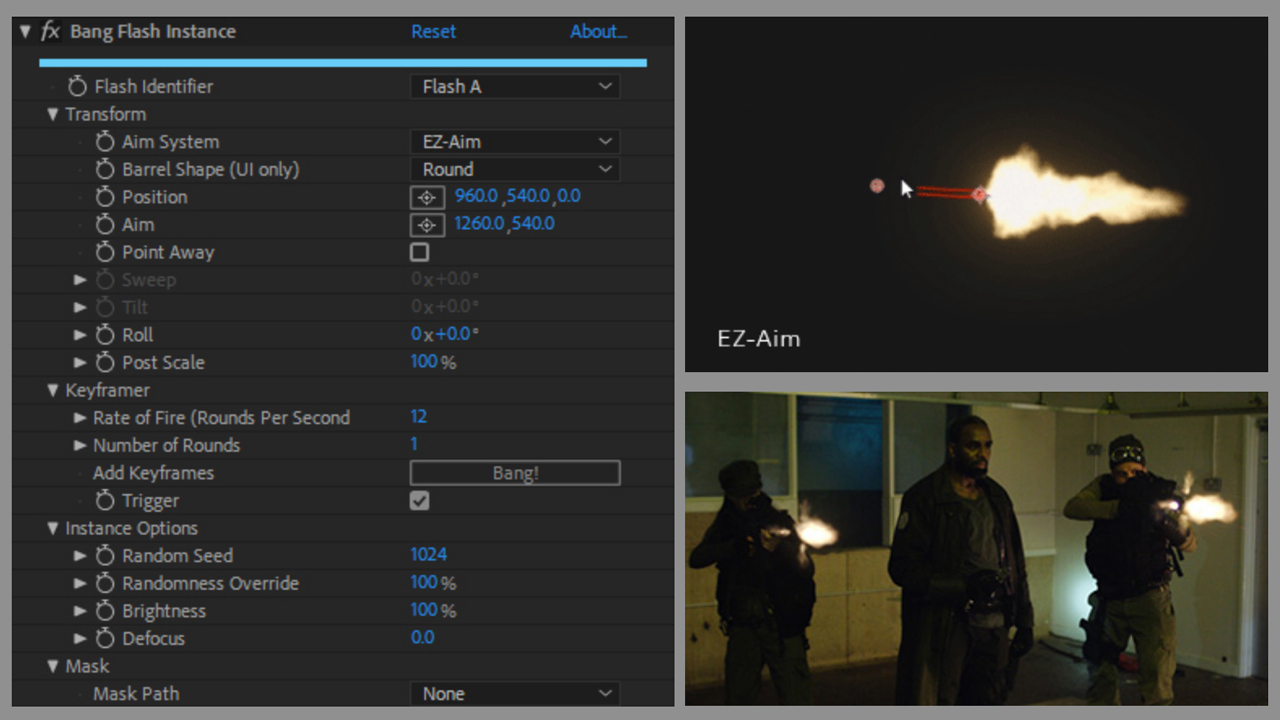 With up-to 16 instances allowed per layer, Bang gives you the flexibility to light up a huge gun battle with ease!  Quickly position and orient your flashes using the EZ-Aim system, then keyframe the flash trigger with a single click.

Using the trigger keyframes and position data directly from the Instance modules, and the flash colour from the Flash Builder modules, the Relighter module automatically simulates the light from the bright muzzle flashes illuminating your actors and location.

The Bang effect, where each flash is rendered and composited into your footage also gives control over global properties, including glow and grain matching.

FIxed a crash with Relighter if a muzzle flash was positioned close to the edge of frame; fixed audio corruptions due to the Module Selector; Added the global Displacement Evolution Speed parameter

Fixes the clash with Rowbyte Comp Screenshot, and potentially other AEGP plugins

Fixes a crash in the Relighter module when using masked layers, or layers with areas of zero alpha for the relight matte