Create advanced gradient ramps in After Effects with the user-friendly FX Gradient! It lets you easily create and edit linear, radial, angular, and reflected ramps with the click of a button. Then you can colorize them with one of the 30 trendy and useful color presets. You can even add some special FX options like tiling, grain, and turbulence!

Most of the Adobe applications come with some small icons that allow you to choose a gradient type among presets (for both shape and color) before applying it.

But, curiously, After Effects doesn’t offer such some gradient options ! AE’s gradient ramp just come as a rather limited effect, that you have to apply manually onto your layer. It only offers 2 basic modes – linear and radial (that you have to re-center each time manually), plus it always begins with black and white and doesn’t offer any angle, tiling nor special FX option…

A really nice other plugin called YY Ramp+, available here on aescripts also as a Name Your Own Price product, allows you to choose from additional shapes, like angular, reflected or diamond (and does offer some useful other options like midpoint, opacity per color, blending mode…), but you still have to apply this effect again and again on each layer, and to tweak the colors and options afterwards, in order to achieve the desired result.

Being able to just create horizontal linear ramps, simple centered radial gradients or angular ramps that you can turn with an angle parameter (useful for creating “radar” like designs for example) shouldn’t be that frustrating, so… I decided to create my own toolset !

A simple toolset that allows you to create your desired gradient type in a really fast and convenient way, by clicking the corresponding icon button, just like you would do within other Adobe Programs.

The 4 gradient type buttons react differently depending on the shortcut you use while pressing them:

Before clicking on the gradient type button (but you can do it afterwards as well, as long as you respect a few conditions, as explained in the next paragraph), you can choose a color scheme among 30 carefully hand crafted presets: 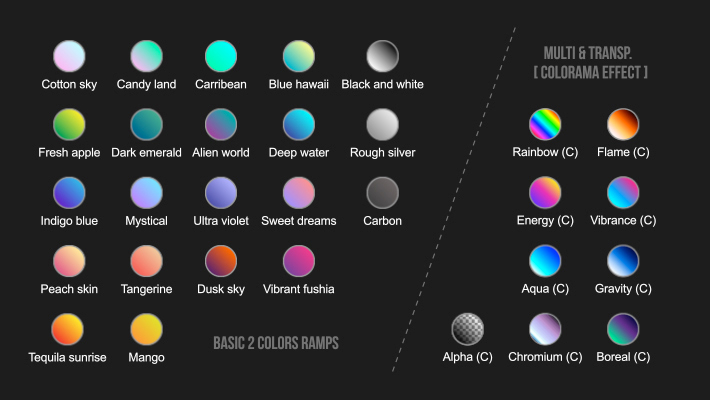 The 21 first ones (shown on the left) are simply a combination of 2 colors, while the 9 last ones in the dropdown list (shown on the right in the image above, and containing a (C) letter in their name) work a bit differently. Indeed, these 9 specific color presets will apply a Colorama effect, that allow you to add more than 2 colors in the color wheel, and to adjust their transparency individually (the Alpha (C) preset is a bit more specific; you’ll have to colorize it with a fill effect on top of it since it comes in black color only).

Another nice addition is that, just by changing the selected preset in the color dropdown list, it will automatically apply these 2 colors scheme to any “Gradient ramp” or even “Tint” effect already applied to your selected layer. This is a neat way to test different colors to tint some footage with the keyboard’s UP and DOWN arrows!

Fully compatible with the YYramp+ plugin

The FX gradient toolset is fully compatible with YY Ramp+, and, it works even better with it!

Indeed, YYramp+ creates real gradients – whichever shape it is – in no time since it is a plugin, while – without this plugin – while FX gradient by its own kind of “mimics” these exact same shapes (angular, reflected…) and options, by stacking a few effects on the layer and controlling them with a lot of expressions. So, even without YYramp+, the FX gradient toolset will definitely help you create the 4 gradient types, but it will be a bit heavier to compute due the expressions and long stack of effects.

The FX gradient toolset has been packed with a bunch of tilling options and “Special FX” features, available by default whether you have installed the YYramp+ plugin or not.

Keep in mind that these are only native AE effects, that are just linked to the main FX gradient pseudo-effect via expressions, so feel free to dive deeper into them by twirling down the renamed effects at the bottom of the stack (the 8th one that creates the Turbulence FX is “called “_______”, if you want to change the Turbulent displacement type to “Vertical only” for example).

Sometimes, you may not want to end up with the full stack of effects, because you just want a basic, simple gradient.

This is why you have the ability, only if you have installed the YYramp+ plugin, to toggle the SFX option off.

When SFX is ON, which is the case by default, you’ll see some little stars sparkling on the icon button, while when it is OFF, the SFX is greyed out and doesn’t show these little stars. In this case, each time you’ll create a new gradient on a selected layer, it will just apply the YYramp+ effect to the layer, with the choosen shape and color preset.

If you haven’t installed the YYramp+ plugin yet, you will just see a greyed out SFX button without any stars and with a thin cross onto it ;
it is just a visual clue that reminds you that you don’t have YYramp+ plugin installed in your current AfterEffects version, and you will be bound to apply the full stack of effects.

Note that it doesn’t mean that the toolset won’t be able to create the desired gradients, but it will be “fake” them by stacking native effects linked to the main Pseudo-effect through more expressions, which involves of course, a little bit more computer ressources.
There are other small limitations especially while creating an “Angular” type of gradient ramp, onto Shape Layers, Text layers and Masked Layers, because it’s really difficult to mimic this kind of gradient with non plain solid, rectangular or footage layers.

So, again, if you want more flexibility and faster performances,
I strongly advise you to install the YY Ramp+ plugin in addition to this FX gradient toolset!

Note to CS6 users:
CS6 users won’t be able to view the color presets as nice round icons ; they will only see their written name instead (due to some AE CS6 scripting UI limitations).
Plus, the FX gradient will appear as “missing effect”, but don’t worry, all the features will work perfectly otherwise!