Professional plugins to power up any editor

Ignite Pro gives you over 180 plugins (550+ effects & presets) to fire up your editor of choice.  Providing you with powerful HitFilm technology at your fingertips, enhancing your toolkit.

Ignite Pro gives you over 180 powerful plugins to use in your existing editor or compositor. Experiment with over 550 visual effects, presets and color analysis and correction tools – without ever toggling between software.

Ignite is intended as a 3rd party plugin for other compatible programs as listed below. 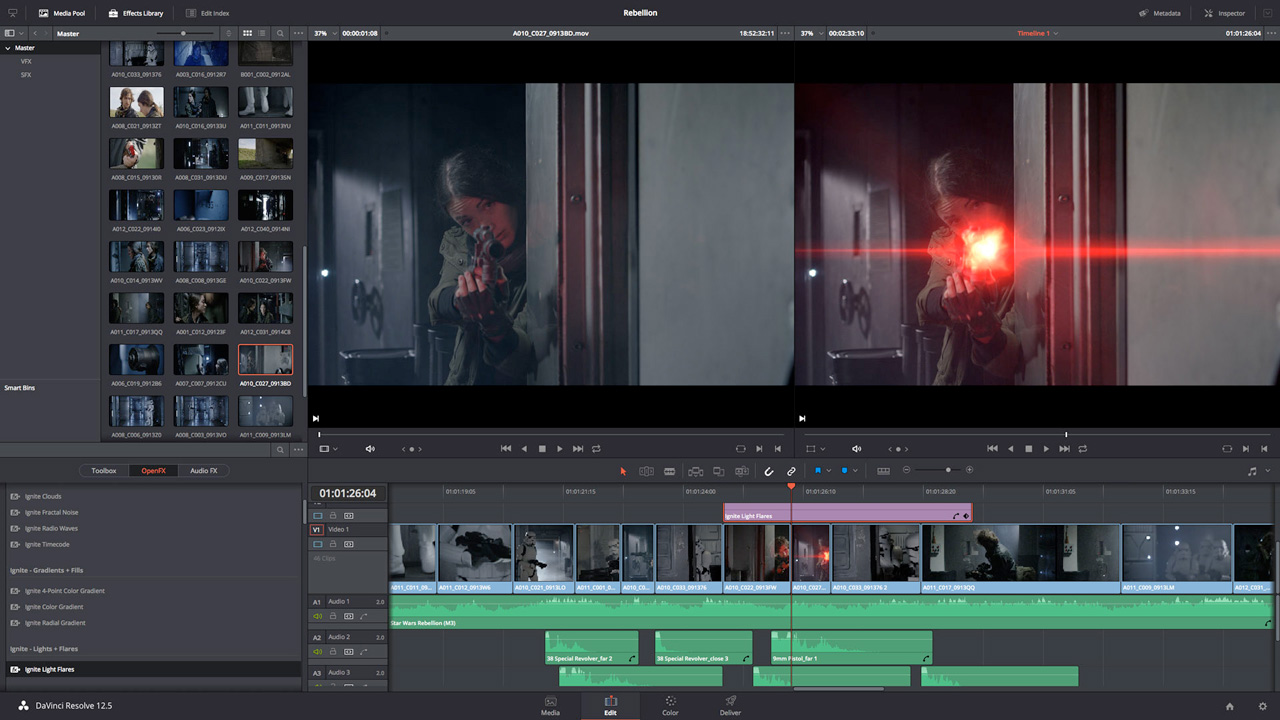 No arbitrary restrictions. No time limits. Ignite Pro neatly plugs into any host or workflow for hassle-free editing on your MAC or PC. Every license gives you 3 seats, so you can use Ignite Pro at home, in the studio, or on the beach— no sweat.

A range of four powerful plugins has been adopted from our latest software, Imerge Pro. Intensify haze or instantly clear foreboding clouds with the Dehaze effect, tweak the exposure of your video to get the perfect look or add inner or outer glow to videos, creating simple borders with no hassle

Bring your content to life from every angle with Ignite Pro’s top-of-the-line 360° filters. Designed specifically for 360° video, our new range of 360° VFX ensure your edits are free-from patchy seams, grainy textures or distortions. You can even use the 360° viewer to see and interact with your effects from any direction.

Harness the power of light in 360° degrees with our new 360° Glow and Glow Darks filters. Create radiant auras around heavenly bodies, or illuminate dark, city skylines for that classic Blade Runner look.

Intensify your action scenes with weapons that cut and fire from every angle. Secure a victory for the Rebel Alliance with double-bladed 360° Lightswords, or scale up your Stormtroopers’ arsenal with 360° Animated lasers.

Don’t let your background steal the spotlight. With Ignite Pro’s 360° Blur you can highlight the elements you need to tell your story and blur out the rest. Have a more complex look in mind? Use 360° Channel Blur to individually blur each channel on a layer. Invoke the power of 360° Unsharpen to (counterintuitively) sharpen blurry or less-than-perfect shots.

Twist and turn your video in all directions with Ignite Pro’s incredible range of 360° distortion effects. Transform ordinary video footage into wild, psychedelic visuals with effects like 360° Bulge and 360° Twirl. Close in on the fine details in a panoramic shot with 360° Magnify.

Ignite Pro’s unique spill simulation plugin replaces unwanted light reflections from your green screen with simulated light from your new background. You can even add the Light Wrap effect for a more realistic light bloom around your foreground elements.

Turn a dreary London sky into a California dream by extracting black or white background with Ignite Pro plugins like Luminance Key and Demult. Perfect for stock footage, these enhance vibrant colors and darken edges for more texture in your scenes.

Sometimes keying only gets you halfway to perfection. Use the Matte Cleaner plugin to put the finishing touches on your composite through smoothing, feathering and choking the edge of the key.

Pro effects in your NLE

Get the J.J. Abrams look without having to adjust F-stops or shine a Maglite into your camera. Volumetric, Anamorphic, and Automatic Lens Flares are all easy to use with automatic identification and application of flares to bright spots in your layers. Ignite Pro even simulates imperfect lens flaring from specular highlights, camera dirt, and anamorphic streaks.

Give your titles some real-world feel using our Surfaced Studio effect. This powerful tool lets you generate smooth or roughly textured metallic and vitreous surfaces on any text (or layers) and have them interact with other objects in the scene.

Don’t let rogue pedestrians come between you and your perfect shot. Clean up your footage by easily hiding or duplicating objects with Ignite Pro’s clone stamp and replacement tools.

Perfect for any action scene – Ignite Pro’s dedicated, 3D muzzle flash engine incorporates a huge library of customizable effects. Drag and drop realistic, infinitely variable muzzle flashes onto any weapon in your prop collection from any angle, and at any size.

Make your own Towering Inferno with Ignite Pro’s procedural fire effects. Augment your stock footage with everything from small bonfires to large-scale building fires. Perfect for turning up the heat and production value.

Ignite Pro’s distortion effects come in four flavors: Heat, Energy, Smoke & Fluid Distortion. Add industrial grit to your props and environments with jet exhausts, burning fires and hot proton beams, or create your own Narcissus reflection scene with fluid caustics— perfect for creating the appearance of looking through a liquid surface within the software.

High-quality visual effects are the building blocks of modern sci-fi classics. So we’ve created a showstopping repository of classic sci-fi tropes – from starfields and lasers, to FTL-jumps, text crawls, earthquakes and even Lightswords. Drag, drop and dazzle.

Take up the mantle of Nikola Tesla with your very own lightning generator. Get your characters to wield Harry Potter wand effects, explode star systems or throw electric bolts with customizable branches, color and motion.

Twist and distort your footage for that added cool factor using Ignite Pro’s Vortex Displacement, Bezier, Perspective and Polar Warps. Flatten your action footage to match your traditional lenses or use Action Cam Lens Distort; making it easy to layer your composites directly onto footage filmed with action cameras.

Tell more stories in a New York minute with a temporal palette that lets you speed up, slow down or reverse the action. Bring your scenes to life by having characters dodge bullets with motion blur, or bend time with echoes, motion trails and temporal displacement.

Ignite Pro is multi-core and GPU accelerated. It has seen some vast improvements under the hood providing superior performance and speed like you’ve never seen before.

Not all effets are available to all hosts.  Please refer to the Ignite Pro site for more details.

Burning Question: How Do I Quickly Give My Project a Letterbox Look?

Add the look of letterbox and give your video a film look. Learn about the tools, techniques, and terminology of letterboxing.