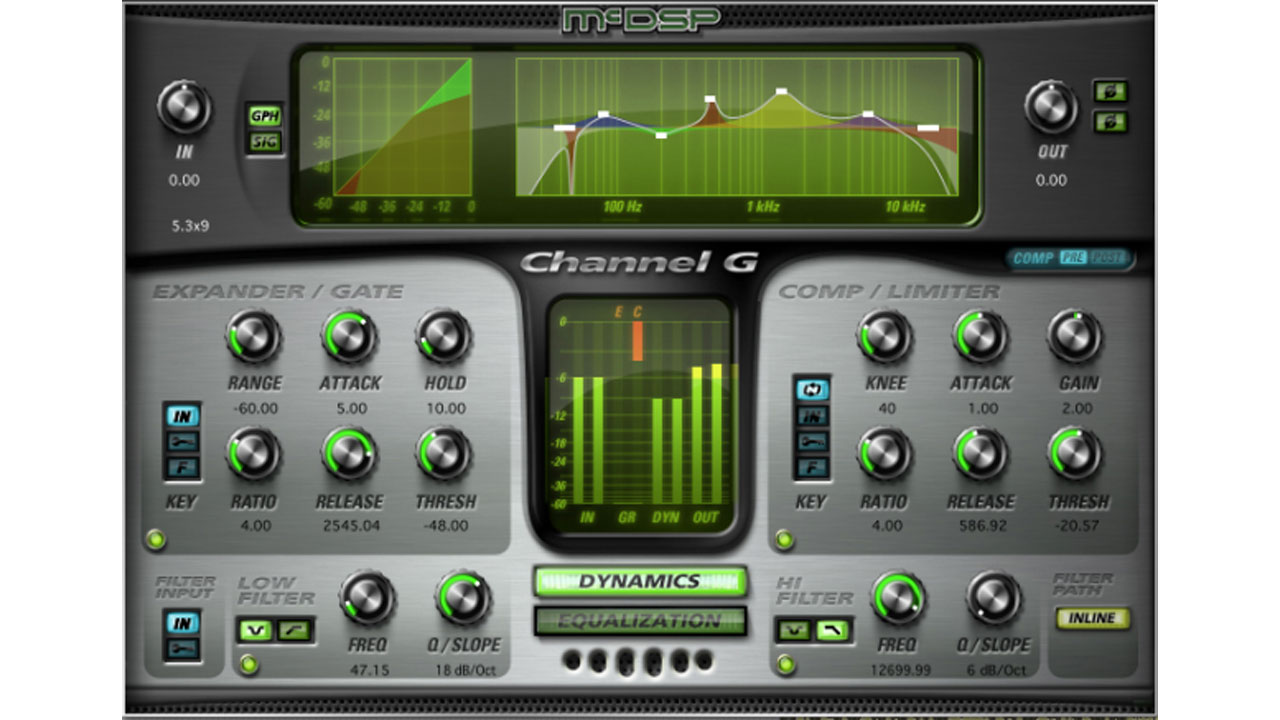 In the compressor/limiter portion of the Dynamics section, there is a Knee control.  This control varies the transition between uncompressed and compressed portions of the compressor algorithm response. The Knee control in Channel G has 11 pre-programmed positions ranging from hard knee to gentle knee curves. The affect of this control can be viewed in the transfer function plot display. Turning the Knee control fully clockwise reveals some additional control positions modeling specific analog console compressors. Modeled compressor modes in Channel G are named as follows (*):

In the EQ section, the EQ modes include McDSP designed ‘Music’ and ‘Post’ settings, along with the following modeled EQ modes (*):

McDSP has long been known for creating emulations of analog gear, but with the added flexibility of a software product.  Channel G is no exception to this standard, and in addition to the previously mentioned models, it comes with a variety of unique features.

Selectable in the G Dynamics and G Console configurations via the ‘GPH’ and ‘SIG’ buttons, the Flow Diagram (press ‘SIG’) shows all signal paths, routing, and inline status of all sections. Key signal flow is also displayed, along with the ‘active’ status of the selected key. When the user selects a key input such as a buss, if there is nothing routed to that buss the key signal path remains unlit. Once signal is routed to the selected key track, the signal path glows to indicate the presence of an actual key signal

Channel G, unlike some of the analog consoles it models, comes with two independent sets of filters – one set for the Dynamics section side chain, and the other for the EQ section.  This capability, coupled with the expander/gate and compressor/limiter selectable side chain inputs – input, side chain, side chain post filter, and output (compressor/limiter only), give the user a variety of signal path choices.  Fortunately all these options are readily displayed in the previously mentioned Flow Diagram.

Having two separate filter sets allows the expander/gate and compressor/limiter to trigger on a selected portion of the frequency spectrum (like the ‘boom’ in the kick drum, or the ‘sss’ in a vocal) using one filter set, while the other available to the audio path for removing low end rumble and high end hiss.

Why should the use of a feed-back compressor be considered then in today’s modern production facilities? This type of compression, while susceptible to pumping or breathing the overall signal level, can be useful in addressing certain dynamic range ‘problems’. For example, suppose you needed to process a lead vocal that has a good deal of dynamic range changes, and is sung in an aggressive style. Heavy compression is needed to limit the maximum signal level, and even the softest of knee shapes does not alleviate the unwanted ‘compressed vocal effect’ thus rendered. Using the compressor output as the key signal, the transition between the compressed and un-compressed signal is minimally different. Because the key signal is already compressed, the compressor will trigger more gently, and possibly produce a more desirable effect.

As mentioned above the compressor in Channel G can also be used as a limiter.  To use it as a limiter simply set the Ratio control to 100:1 and adjust the Attack control down to the desired response.  The Attack control can even be set to provide instantaneous (i.e. 1 sample) limiting!  For more advanced and transparent limiting action, check out the ML4000 mastering limiter and multi-band dynamics plug-in.

And while the Channel G control layout is perfectly suited for the Digidesign control surfaces, it also works great with a mouse and keyboard.

McDSP plug-ins require an iLok2 or iLok3 USB Smart Key, or an iLok License Manager account and an iLok Cloud session for authorization.

McDSP is pleased to announce support for Big Sur (Mac OS 11.x) as a free update in 2021 for all v6 customers and APB hardware customers. McDSP’s latest release of AAX Native, AAX DSP, AU, and VST3 plug-ins (v6.8), and APB plug-ins (v1.3), are being qualified on Big Sur, and are available for download at mcdsp.com now.