Delivers the big board sound with unprecedented flexibility

The development of surround sound formats has created more opportunities for the audio engineer to explore and exploit the sonic possibilities. But with the flexibility came technical problems and challenges. Fortunately, some of these issues are addressed by the Channel G Surround plug-in from McDSP.

Sticking with the 5.1 format, a typical mixing strategy is to have the ‘focus’ of the audio content in the L, R, and C channels. The Ls and Rs channels are used for ambient sounds and subtle (or not so subtle) panning effects to , you know, surround the listener in the audio experience. The LFE channel is what you use to annoy your neighbors, or at least give you something to pump the kick drum or low end of the explosions through.

While all this flexibility is great, maintaining balance in the mix is more difficult as audio cues, instruments, and effects are coming out of more channels. If only there was a way to divide the 5.1 channels into some sort of logic group of channel sets, and apply some sort of dynamic range and level control to each set. Gosh, that is just what the Channel G Surround Compressor/Limiter plug-in does, so read on! 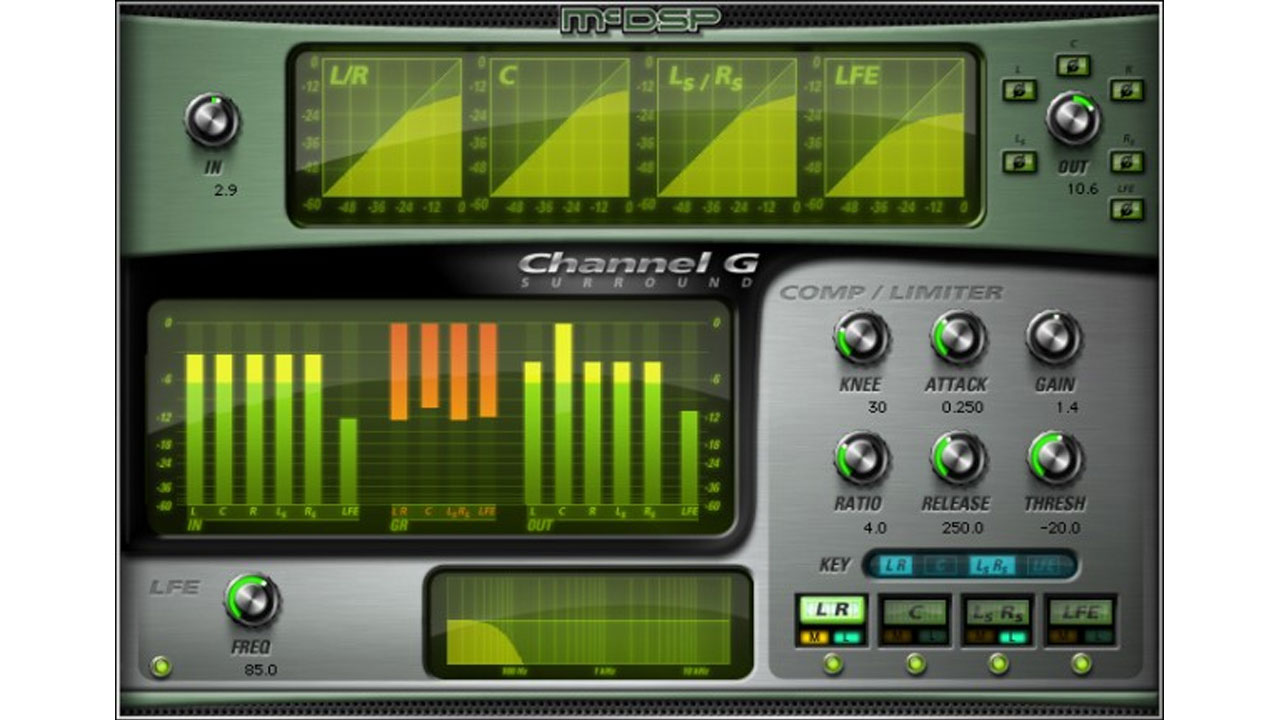 For example, a user can apply hard knee and high ratio settings on the LR and C channel sets, while using more gentle ratios, attack, and release values for the LsRs channel set, and something else entirely for the LFE channel. In this case, each channel set compressor/limiter is using only its own inputs as the key signal for compression.

Consider this processing a 5.1 mix containing dialog in the center channel competing with the audio of the left and right channels. The LR channel set compressor/limiter selects the C channel as its input key signal, causing the levels of the LR channel set to drop when speech occurs in the C channel. The listener attention is drawn to the center where the dialog is occurring, and the other content in the LR channel set is no longer as much a distraction. This method of reducing the levels of one or more audio channels with another audio channel is often referred to as ‘ducking’.

Clearly in this example some judicious fader riding could also alleviate the problem. But the use of multi-channel ducking as only possible with the Channel G Surround plug-in is far easier to setup, most likely a sonic improvement, and is fail safe (no missed automation cues).

While the independent control of each channel set compressor/limiter is great, at some point the relative control settings are made, and what remains is the adjustment of all channels concurrently. This is where channel set control linking comes in very handy.

For example, suppose the LR and C channel set compressor/limiters have been setup appropriately. By linking their controls, now the balance of the LCR channels is controlled independently of the Ls, Rs, and LFE channels. The screen shot excerpt to the right shows this linking configuration (example 2). 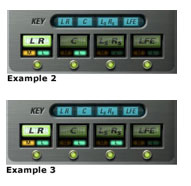 In another example, suppose there is too much low end in the mix. The LFE channel can be made to operate independently of the LR, C, and LsRs channel sets and setup to control the offending low-end rumble. Meanwhile, the LR, C, and LsRs channel sets can be linked together once their relative balance is established, and workflow remains fast and simple. The screen shot excerpt to the right shows this linking configuration (example 3).

McDSP plug-ins require an iLok2 or iLok3 USB Smart Key, or an iLok License Manager account and an iLok Cloud session for authorization.

McDSP is pleased to announce support for Big Sur (Mac OS 11.x) as a free update in 2021 for all v6 customers and APB hardware customers. McDSP’s latest release of AAX Native, AAX DSP, AU, and VST3 plug-ins (v6.8), and APB plug-ins (v1.3), are being qualified on Big Sur, and are available for download at mcdsp.com now.