Mike Udin Flash Buffer Pro for Cinema 4D is a plugin that helps you to create Object Buffer passes when you need to prepare a scene for rendering.

With this plugin, you can also quickly and easily assign the available passes, delete unnecessary or select objects to which it is assigned. Rename function will help specify the names of the results of rendering passes, as well as convenient to distribute all the sequences on the subdirectories.

Set in the Name field the needed template of pass name of and press Create a new button. The plugin will analyze all the Object Buffer numbers used in the scene, will find first unused, and apply it to a new or existing Compositing tag. After that, you will see a new Object Buffer pass with the specified name in the Render Settings.

Say no to the numbers and yes to the names!

Flash Buffer saves you from having to remember the number of passes when working with Compositing tags. This is the basic concept of the plugin. By specifying the name of the pass, you do work with it more productive. You can also use text variables to speed up the process.

Flash Buffer will help you reduce the time to add a new Object Buffers significantly and you can avoid this routine process by a couple of mouse clicks!  New passes are created in two modes. Separate mode – each selected object receives its own individual OB pass, Single group – the selected objects are placed into a single pass.

To assign an existing OB pass to the selected object, simply click Apply pass button, and choose a pass.

Removing passes is also organized very convenient. You can clear the scene with all the information about OB passes, or do it individually for the selected objects. In addition, remove unnecessary Compositing tags so that you can use them for other purposes.

Sometimes you need to find an object by its OB pass quickly. In the Select tab, you will find two buttons helping to select all objects with OB passes or pick up just one.

Excellent! Finally, we completed the scene rendering, but look, what is this? OB passes files have complicated names “… object_1_0000.jpg”, “… object_3_0035.jpg”, etc. It is time to apply the Flash Buffer Rename!

Rename function allows sorting sequence files into separate subfolders. This processing not only OB passes files, but also the other passes from the specified directory. It should be noted that the Rename function works in a separate thread. This means that when processing large numbers of files, Cinema 4D won’t hang, waiting for the end command, and you can use the program further.

Path from names option indicates, that now all slashes (“/” or “\”) in the passes names are the dividers to create a new path. Organizing OB files becomes easier!

There’s a script for Adobe After Effects included in Pro edition plug-in, which helps to import the sequence of files after the renaming. The main advantage of this method is supporting Unicode characters in file paths. This is usually a problem when you import via * .aec file, and all subdirectories structure built using the Path from names functions will also be reflected in After Effects project.

Flash Buffer comes in two editions. The Lite version is cheaper by more than two times. To clarify, if you’re working with Cineware, it may be a good fit for you.

What’s missing in the Lite Version.

In this video you will learn how to use this plugin, and find a lot of useful information about using tokens in Cinema 4D R17, to sort the results of rendering files on subdirectories. English subtitles available. 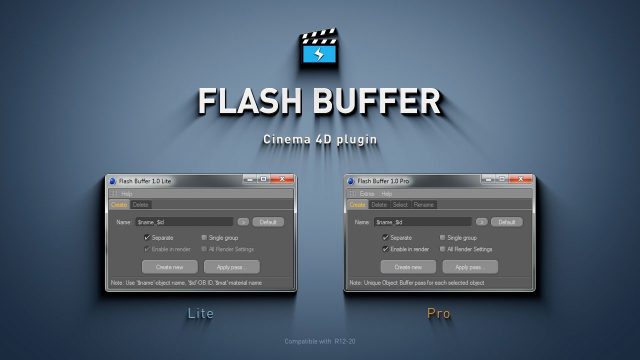