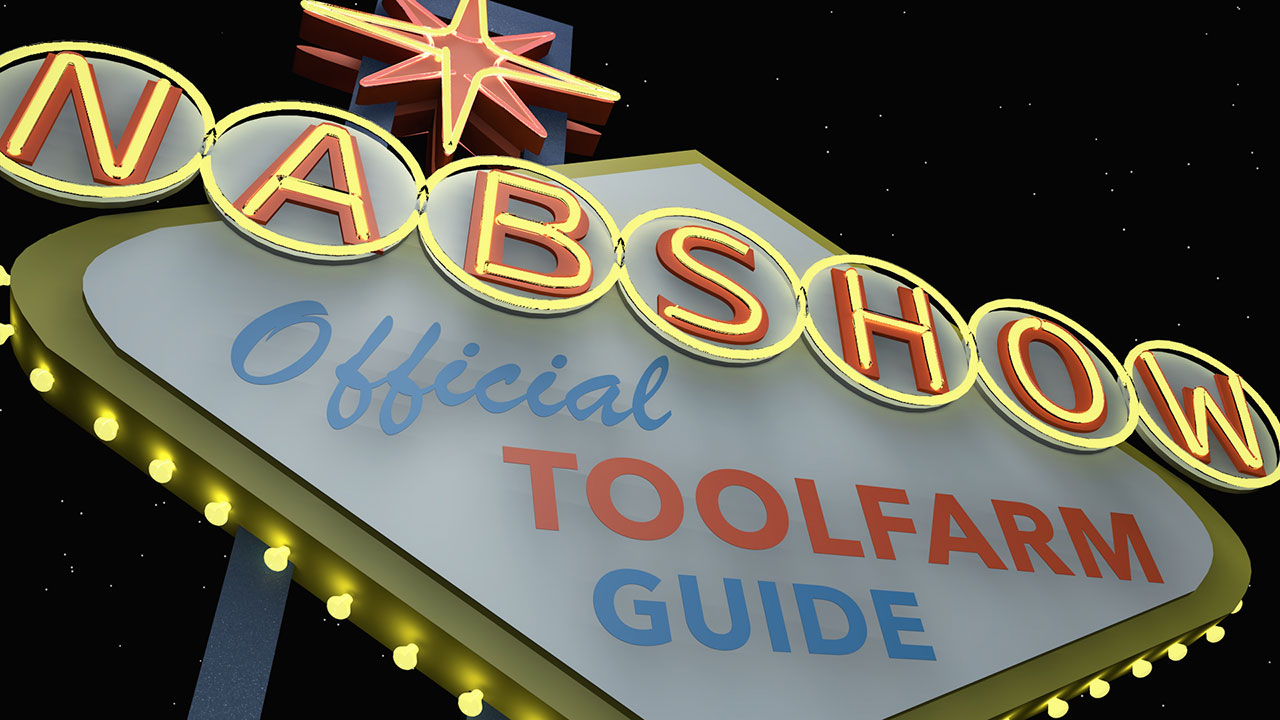 NAB will be here before you know it and Toolfarm is the place for up to date information about the tools you care about, updated several times a week.

Contact Michele Terpstra with any information you would like posted about your booth or event, or to correct any errors.

Post|Production World Conference – Save $100 using the code PPW03 or PPW19.

Register for NAB here. Register by mid-March to receive your badge in the mail! U.S. media registering after Friday and international press will need to pick up badges onsite at the Las Vegas Convention Center.

Vendors at the show each have their own free code. There’s a competition put on by the show for exhibitors to get at least 300 sign ups. See below in the vendor grid for some free codes. I would recommend that you register for a free one, even if you aren’t sure that you can make it to the show. The code will save you about $150 on a pass. Let us know if your booth has a code and we’ll add it to the list.

There are loads of free guest pass codes for a Free Exhibits Pass on Twitter now, but here are a few from our vendors. Note: Free Expo codes are good until March 24, after that, they’re $25.

Get some tips on how to make it through the convention at your best!

Last year we put together a fun survival video for attendees. It’s as relevant this year as it was for last!

Booths not to Miss

It’s early so we haven’t heard if everyone who had booths last year will be participating again. We’ll edit the list below as we get information and add notes as needed. If you have information that we should add, please contact Michele.

If you know of event details that have been released, let us know! See also, Broadcast NAB Show Party List.

What: The Mixer lets you catch up with friends. Or meet your ‘virtual’ friends from around the world. Plus, make new friends. Where else will you find colorists from around the planet all in one room!
When:Sunday, April 23, doors open at 7pm
Where: 108th floor of the Stratosphere Tower, 2000 S Las Vegas Blvd, Las Vegas, Nevada 89109
More info: coloristmixer.com

What: Join us for a Blue Collar Post Collective + #PostChat NAB Show Mega Meet-Up. Instead of creating discrete meet-ups that ruin your social calendar even more than it already is, we’re combining forces for one big casual hang. No raffles, no announcements, just a group of post production nerds on the eve of NAB and a bar within reach.
Where: O’Shea’s Casino, 3535 S Las Vegas Blvd, Las Vegas, Nevada 89109
When:Sunday, April 23 at 6 PM – 8 PM PDT
More info

If they’re doing it again this year, we’ll have the info here.

What: The premier event for post-production, motion graphics, 3D and anyone in the production field attending NAB.
Where: Monte Carlo Hotel
When: 5:30-9:30pm. Doors open at 5:30 pm. Dinner from approx 7 pm. The event finishes at about 9:45 pm.
Tickets: More info to come Tickets available March 6!

Where: ?
When: 10:00 PM – 11:00 PM
Complimentary admission for Attendees and Exhibitors with your badge

Where: Sunset Park
When: 7:30 AM
Technically a “before hours” event, if you haven’t put enough mileage on your shoes, join the 4K 4Charity fun run. 4K is not actually that far and I could probably even handle that distance!
More info: 4K 4Charity Fun Run

Due to construction, the annual meet up has been moved to Beerhouse, nearby, just across the Park Plaza. Things usually get going around 6-ish.

Where: ?
When: We’ll let you know
Complimentary admission for Attendees and Exhibitors

Other Things to Check Out at NAB 2017

It’s still early but we know we’ll have stuff to post here in the next few weeks. Stay tuned. Bookmark this page. It will be updated.

Future of Cinema Conference
The Society for Motion Picture and Television Engineers (SMPTE) presents a two day conference entitled; The Future of Cinema: The Intersection of Technology, Art, & Commerce in Cinema. The conference has been scheduled for April 22 and 23.
Learn more at Broadcast Beat

Aerial Cinematography Techniques Field Workshop
Small Unmanned Aerial Systems (sUAS or Drones) are a staple in the toolkit of any videographer, and with good reason; they are used not only to create beautiful video from new (and previously unachievable angles), but to collect data that can be used for other production content. Cost effective, reduced risk, and often able to access in places that are generally inaccessible, this is not surprising that video professionals are rapidly adding sUAS to their production kit. Instructors include Douglas Spotted Eagle and Luisa Casanovas.
Learn more

LumaForge Presentations
Monday, Tuesday and Wednesday, April 24-26 at the Courtyard by Marriott Las Vegas Convention Center. Seating is limited and first-come first-served. On-time arrival and registration prior to the event is highly recommended to avoid lines at the event, though registration does not guarantee your spot. See the presenters list, including Steve Martin from Ripple Training, Mark Spencer, Jeff Greenberg, Patrick Imhofer, Robbie Carman, Alexis Van Hurkman, and others.
Learn more

Women in Post Production PR List
If you’re a company looking to staff your NAB Show booth soon, I can provide you a list of well-qualified women who are interested in this work. And if you’re a woman, you can add yourself with this form — for booth work, podcasts, panels, and other stuff. Via Kylee Peña.
Learn more