Ramma is post production support software designed to take the pain out of finding problems when working with image sequences of animation or video.

Ramma is a post production support tool that is designed to take the pain out of finding problems when working with image sequences of animation or video. Render problems can happen for many reasons, often due to hardware or software failure, or human error but hunting down these problems in sequences can be a nightmare.

This is why Ramma exists. Whether they be missing or dropped frames, corrupted or even non-contiguous frames that are given an incorrect numerical padding in the filename, Ramma quickly and automatically detects these common problems. 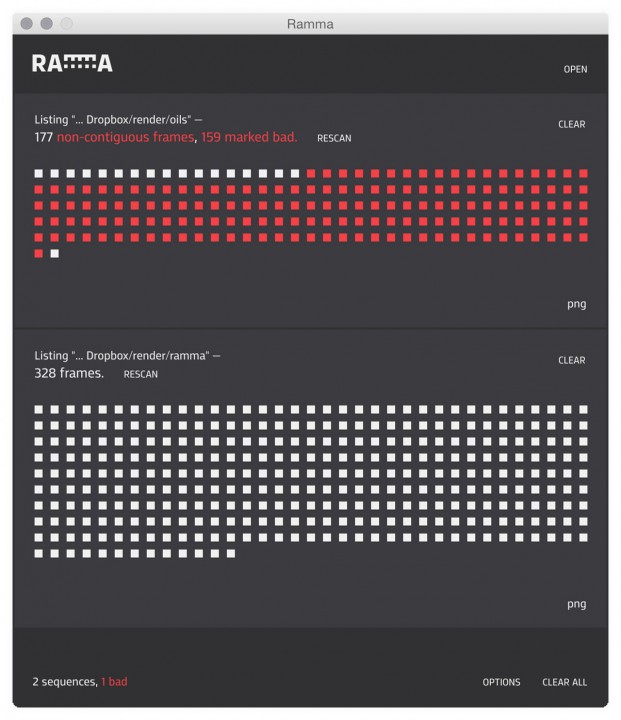 It is designed to be fast, smart, and simple, to find problems at a glance. To mitigate problems that may arise before export and delivery, saving you time and grief.

Ramma is designed to be simple to understand and easy to use. Every frame of a sequence is represented as a block in the user interface, making it easy to see problems at a glance.

Ramma updates on the fly when changes to sequences are detected. With this you can effectively use Ramma as a render output monitor. Ramma will also display notifications if problems are found.

Ramma inspects each frame and checks it for incorrect file headers, file size divergence or other factors that would cause a sequence to become invalidated.

DESIGNED TO BE FAST

Ramma is engineered to populate sequences and report any potential problems fast, without user intervention.

ALL IN THE DETAILS

Ramma provides contextual information about frames, their file name on disk and what— if any— problem there may be.

SUPPORT FOR ALL COMMON FORMATS

WORKS OVER A NETWORK*

This release features a rebuilt UI for all platforms and languages and bug fixes.

Reload and Report (if there are bad frames) have been moved to a context menu on right click of any sequence.

This release also adds support for the Hundred Rabbits theme system. Themes can be found at https://github.com/hundredrabbits/Themes
Themes created specifically for our project management tool Tape are also compatible. https://github.com/aeriform-io/Themes

This release for macOS and Windows includes the ability to hide sequence maps, added support for particle sim data, as well as UI and performance improvements.

The idea of network rendering is to distribute your render over a network, or farm, of computers, to speed up your render times.