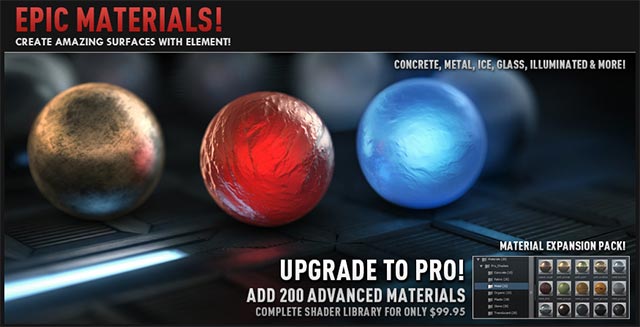 Deen designed to work with numerous 3D programs from a single product.

Use with Cinema 4D, 3D Max, Maya, and of course, the powerful Element 3D plug-in.

Here's a Video Copilot Tutorial Compilation of our favorites for your learning enjoyment and to celebrate our exclusive sale, happening now!

Rajat Subhra, the founder of VFX World, has a tutorial that shows you some great tricks for getting the most out of Element 3D. Plus, sale info.

Dennis Wei explains some of the techniques he used to create an X-Wing Hologram animation using Cinema 4D and After Effects, using the awesome free X-Wing model from videocopilot.net.

Film Riot has created a clever short film entitled U.F.Oh Yeah, Directed and written by Ryan Connolly and starring Josh Connolly, the film is about a U.F.O. enthusiast and conspiracy theorist who has an encounter with extraterrestrials that doesn’t go quite as one might expect. After the film, learn about how some of the effects were made. There are a whole series of videos here and they’re fantastic!!

In this tutorial Andrew Kramer from Video Copilot shows you how to create an intricate deform animation using 3D Noise & Twist with Element 3D V2 inside After Effects.

Create a Simple Car Rig with Element 3D! This technique will work well for almost any 3D vehicle model. Be sure you are using Element 3D V1.6

Depth Compositing in After Effects

Post by Andrew Kramer/ Video Copilot: "In this tutorial we’ll use a technique called Depth Compositing to combine stock footage with 3D rendering and the use a Z-Depth pass. This method allows you to place 2D elements like stock footage into the depth of a 3D render. I also demonstrate how to export a Z-pass from 3D max, Cinema 4D and even use Element 3D to output a depth channel."